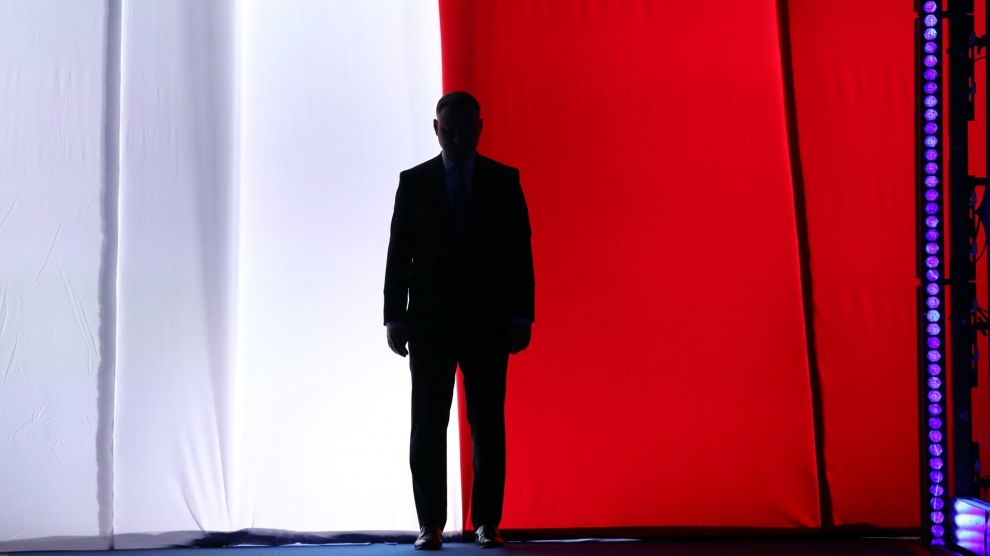 Just a couple of short months ago, Poland’s presidential election was seemingly routine, with the incumbent Andrzej Duda set to face a mixed bag of opposition candidates all vying to unite the country with cliched slogans set to be revealed at colourful campaign rallies.

Things look a little different now. Owing to the restrictions put in place due to the Covid-19 pandemic, the campaign rallies never happened. Indeed, an election campaign as we know it never happened. However, barring any last-minute change of heart from the country’s ruling Law and Justice party (PiS), the election will happen, as scheduled, on May 10.

Not that the election – set to be held by post – will be recognisable. There is talk of a mass boycott, concerns over public health and the potential that the state-owned postal service will end up counting votes. Trying to unpick this seismic shift in electoral convention is not easy.

Polling booths are not an option

Although Poland, like much of emerging Europe, has not been as badly affected by Covid-19 as many countries in Western Europe, holding a conventional presidential election under a state of lockdown would be impossible. PiS’s solution has been a postal vote, after its offer to delay the election by two years, extending Mr Duda’s present term to seven years and barring him from standing again, was rejected by the opposition.

Both solutions are, as things stand, unconstitutional, requiring a change in the law that needs to be passed by both the PiS-controlled Sejm (parliament) and the opposition-controlled senate. Since the opposition dismissed the prospect of a seven-year term, PiS has been pushing hard for a postal vote – something that has never taken place in Poland before. Despite a law allowing a postal vote passing through the Sejm on March 31, it remains under review in the senate, with time quickly running out.

Typically, Polish elections are exclusively voting-booth based, in conjunction with the constitutional act of a ‘direct’ democracy. Constitutionally, the law regarding election processes cannot be changed in a period shorter than six months before the vote, not that PiS has shied away from attempting to ram the necessary changes through legislature, leaving little time for preparations. Changing the way an entire country votes just days before an election is chaotic and will have deep ramifications for due process.

Under normal election processes, the National Electoral Commission (PKW) receives and counts votes cast at the ballot box. In a postal vote, this duty would fall on the Polish postal service (SPA, Poczta Polska), a state-owned company headed by a PiS ex-deputy minister of defence, Tomasz Zdzikot, who replaced Przemysław Sypniewski after his resignation on April 12. (Other SPA posts have also been filled by former ministry of defence employees).

Further logistical challenges threaten the electoral processes if a postal vote were to go ahead. More than 30 million electoral envelopes need to be delivered to homes, and at such short notice, many opposition figures, and even some within PiS, have voiced their concerns regarding the feasibility of this taking place without fraud or breaches of privacy.

Moreover, with postal voting new in Poland, there is little time to communicate effectively with the public as to how exactly it should take place. Others have noted that the process might violate EU data privacy laws. As things stand, it is conceivable that the logistical preparations of SPA and the government will fall short.

“This haste particularly impacts Poles living abroad, who were required to register to vote 15 days before the election, a deadline that has already passed, or five days if they are proven to be in quarantine,” says Paulina Lenik of the School of Slavonic and Eastern European Studies (SSEES) at University College London. Many overseas Poles may therefore miss out on voting, a significant distortion given that Poland’s diaspora is broadly an opposition-voting demographic.

“I’ll be honest. I’ve been studying politics for many years now, and I don’t think anything has ever perturbed me more than the current situation,” says Anna Materska-Sosnowska, a political scientist at the University of Warsaw and board member at the Stefan Batory Foundation. “The justifications being used are unimaginable, as is the way that everything is being carried out. It violates every rule out there.”

Unsurprisingly, the idea of a hastily-organised postal vote has met with resounding criticism. EU Values and Transparency Commissioner Vera Jourova told Polish daily Rzeczpospolita earlier this month that she was “concerned about free and fair elections and the quality of voting, and of the legality and constitutionality of such a vote.”

Opposition candidate Małgorzata Kidawa-Błońska, standing for the Civic Platform, went so far as to call the election a “coup d’etat not only against our democracy but also against the life and health of Poles. This election will not be democratic and the result is fixed in advance. We cannot take part or encourage Poles to take part in this farce, this election must not go ahead on May 10.” Senate speaker Tomasz Grodzki echoed these remarks, calling a postponement a “moral duty”.

Many opposition figures are now calling for a boycott of the vote altogether, and so far no fewer than nine former Polish prime ministers and presidents have urged voters not to participate in the postal election. These included the former president and head of the Solidarity trade union movement Lech Wałęsa and former EU Council president and Polish PM Donald Tusk. “The procedure of voting by post in this form and time, as is proposed by the ruling party, are pseudo-elections. We will not take part,” the nine former leaders said in their joint statement.

However, Paulina Lenik notes that the push for a boycott remains limited to words.

“The leading opposition candidate – Małgorzata Kidawa-Błońska – has not withdrawn her candidacy. That would indicate, despite the legal conundrum with the way these elections are organised, the opposition is de facto partaking in the process,” she tells Emerging Europe.

PiS has argued that calls for a postponement is simply a way for the opposition to stave off defeat. “The opposition are calling for [this] because they are hysterically trying to avoid voters passing judgment [on them],” said Jacek Zalek, an MP from Accord, a junior coalition partner of Law and Justice. “They are only fighting for who will have leadership of the opposition camp.”

Przemysław Żurawski vel Grajewski, an adviser to the Polish foreign minister, says that there is simply no legal possibility to postpone the election other than by amending the constitution.

“This requires a constitutional majority in parliament, which cannot be built without the opposition’s support. The opposition received such a proposal from the government in the form of extending the president’s term in office by two years, banning him from standing for the presidency again thereafter, and it rejected the offer,” Mr Żurawski vel Grajewski tells Emerging Europe.

However, an alternate move that PiS could have played was to call a state of emergency, which under the Polish constitution would delay the election for up to 90 days with an allowed 60-day extension. “Concerns that delaying the election would leave the country without a president are baseless, as, under the current law, the state of emergency would prolong Mr Duda’s time in office, and if he were unable to carry out his duties, the Sejm’s Marshall would act on his behalf, ultimately safeguarding against potential post-holder discontinuity,” Ms Lenik explains.

The leader of PiS, Jarosław Kaczyński, has so far refused to sanction a state of emergency. Mr Żurawski vel Grajewski says that there is no need: “Under the rule of today’s opposition, in 2008 a law on ‘the prevention and eradication of infections and infectious diseases in humans’ was adopted. It endows the government with so many powers necessary to combat the current epidemic that it makes it redundant to introduce a state of emergency.”

Not that opposition are blameless. As Ms Lenik puts it, “the opposition struggles with a chronic political disability to propose a strong counterbalance to what PiS offers.” Yet at a time when campaign rallies cannot take place, people are locked indoors and traditional media outlets are mainly backing PiS, the opposition has not had a chance to propose anything.

“The government has just recently pumped an incredible two billion zloty (500 million euros) into public TV which ensures that Duda has an impeccable and directly accessible campaign image. That is not true for the opposition candidates, whose visibility on public TV channels has been reduced to unprecedented levels,” continues Ms Lenik. “PiS draws its support from the audience of the conservative Catholic media (Radio Maria and TV Trwam), which equate religious principles with political ‘justness’, that is PiS being the only right choice.”

Factor in the boycott by opposition supporters and it is clear that Mr Duda will likely win the election in the first round by taking more than 50 per cent of the vote (he is currently polling at over 58 per cent). Another recent poll however found that just 28 per cent of Poles will take part in a postal vote. Such a low turnout might raise questions as to the legitimacy of Mr Duda’s second term in office.

Poland’s health minister said on May 1 that the country was still in the growth phase of the pandemic. The country has 12,877 cases, and 644 people have died. Poland’s economy is expected to contract four to five per cent in 2020. While commentators expect a quicker recovery for Poland than for other EU nations, the near future does not look rosy for a party that owes much of its support to generous social welfare payments. Mr Duda may never be so popular: hence the eagerness to hold the election now.

The manner in which PiS has attempted to change the law in order to proceed with the vote has been condemned by the Organisation for Security and Co-operation in Europe, which notes that an election cannot be free and fair whilst campaigns are suspended and state-owned media leans towards the sitting president. After controversial judicial reforms (which saw the EU bring new infringement procedures against Poland earlier this week), the Polish government could see its relationship with the EU deteriorate further as a result of this election.

While South Korea managed to successfully hold an election with the pandemic in full flight, its situation is different from Poland, with significant public trust in the government’s preparations and confidence that the process would be orderly. In Poland, with a deficit of public trust in institutions and an increasingly polarised political climate, the upcoming election could be a sign of what’s to come for many democracies facing elections in a time of pandemic. Particularly those without the necessary checks and balances.

“Unfortunately this is all very easy to explain. Democracies die when those in power get that power through the democratic process and but then wield it in an authoritarian manner. In Poland this has been done by disassembling the constitutional tribunal, then performing a coup against the [independence of the] courts,” Ms Materska-Sosnowska says. “The only thing left are democratic elections.”