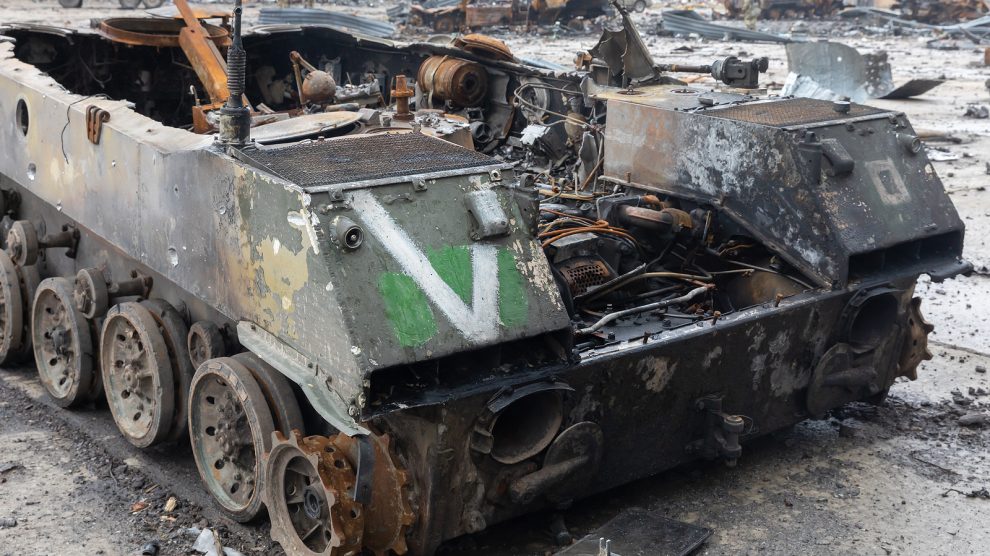 Top US general Mark Milley has stressed that the Russian invasion of Ukraine is failing, despite some recent advances in the east of the country. “While the Russians have achieved some incremental tactical success in the Donbas over the last several weeks and actually months, they have failed to achieve their strategic and operational objectives,” Milley told reporters on Thursday. “A capable and defiant people of Ukraine, their capital still stands, their army still fights and their people are more determined now than ever to preserve their democracy.”

Russia’s military focus in Ukraine is no longer “only” the east, Foreign Minister Sergei Lavrov has said. In an interview with Russian state media, he implied Moscow’s strategy had changed after the West supplied Ukraine with longer-range weapons. Russia would now have to push Ukrainian forces further from the front line to ensure its own security, he added.

The expansion of Russia’s objectives was also noted on Tuesday by US National Security Council spokesman John Kirby, who said Russia was already making plans to annex large swathes of Ukrainian territory. Kirby said Russia was installing illegitimate pro-Russian officials to run occupied regions of Ukraine. These new “administrations” would then organise local referendums on becoming part of Russia, possibly as soon as September.

Ukrainian President Volodymyr Zelensky this week suspended two important figures in his government, questioning their leadership qualities and accusing many of their subordinates of treason and collaborating with Russia. The two officials – Prosecutor General Iryna Venediktova and State Security Service (SBU) head Ivan Bakanov, a long-time associate of Zelensky – are now subject to an investigation and have been temporarily replaced.

The United States estimates that Russian casualties in Ukraine so far have reached around 15,000 killed and perhaps 45,000 wounded, CIA Director William Burns said on Wednesday. “The latest estimates from the US intelligence community would be something in the vicinity of 15,000 (Russian forces) killed and maybe three times that wounded. So a quite significant set of losses,” Burns said while speaking at the Aspen Security Forum in Colorado.

Vladimir Putin won the dubious endorsement of the Iranian supreme leader for Russia’s invasion of Ukraine during a visit to Tehran on Tuesday. Ayatollah Ali Khamenei told Putin: “War is a harsh and difficult issue, and Iran is not at all pleased that ordinary people suffer from it, but in the case of Ukraine if you had not taken the initiative, the other side would have caused the war with its own initiative … If the road is open to NATO, it knows no boundaries and if it was not stopped in Ukraine they would start the same war some time later under the pretext of Crimea.”

Ukraine’s farmers will plant up to two-thirds less wheat later this year if the country’s main export route is still blocked, prolonging the global food crisis, its agriculture minister predicted. Mykola Solskyi told the Financial Times this week farmers faced a financial crisis if the Russian blockade of the Black Sea was not lifted. Many would lack the cash to pay for seed, fertiliser, herbicide and fuel for winter wheat and would grow rapeseed instead, which is not used in cereal or bread production but commands a higher price and has a lower yield, meaning there would be less to transport.

Ukraine’s central bank, citing the deep economic impact of the war with Russia, has devalued the hryvnya by 25 per cent. The bank said in a statement on Thursday that the new official rate for the currency is 36.5686 to the US dollar. The move was decided “in view of the change in the fundamental characteristics of Ukraine’s economy during the war and the strengthening of the US dollar against other currencies,” the bank said.

Armenia has announced it will withdraw all remaining military units from Nagorno-Karabakh by September, fulfilling a pledge it made at the end of the 2020 war with Azerbaijan. The head of Armenia’s Security Council, Armen Grigoryan, told state media on Tuesday that all conscripts will return home by September and will not be replaced. Most soldiers in the Armenian military are conscripts; Grigoryan added that contract soldiers from Armenia are not currently serving in Karabakh.

The new cabinet of Estonian Prime Minister Kaja Kallas was sworn in on Monday, re-establishing political stability, but she warned of tough times ahead for the economy as energy costs soar and inflation rages in the fall-out from the war in Ukraine. Estonia had been under a minority government since June 7 when Kallas cut ties with her junior coalition partner. On July 8 Kallas announced a new three-party coalition of her liberal Reform Party, conservative Isamaa and centre-left Social Democrats to command 55 of 101 seats in parliament, which last week voted to reappoint her as premier.

A total shutdown of Russian gas supply would reduce GDP in Hungary, Slovakia and Czechia by as much as six per cent, the IMF warned this week. “The prospect of an unprecedented total shutoff is fuelling concern about gas shortages, still higher prices, and economic impacts. While policymakers are moving swiftly, they lack a blueprint to manage and minimise impact,” IMF officials said in a blogpost. “Our work shows that in some of the most-affected countries in central and eastern Europe, there is a risk of shortages of as much as 40 per cent of gas consumption and of gross domestic product shrinking by up to six per cent.”

Human rights groups meanwhile have criticised an EU deal to ramp up gas supplies from Azerbaijan, as Europe scrambles to secure non-Russian sources of energy. The European commission president, Ursula von der Leyen, on Monday hailed Azerbaijan as a “crucial” and “reliable” energy supplier, as she announced an agreement with Baku to expand the southern gas corridor, the 3,500km pipeline bringing Caspian Sea gas to Europe. Human Rights Watch however said the EU should not have signed the agreement without insisting on political reforms in Azerbaijan, including the release of scores of political prisoners and changes to laws that heavily restrict non-governmental organisations and the media.

Hungary is aiming to reach a deal with the European Commission to unblock billions of euros in EU funds by the end of August, Hungarian State Secretary for EU Affairs Janos Boka said on Tuesday. The executive Commission has been withholding its approval for disbursements to Budapest of 5.8 billion euros in grants from the EU’s special recovery fund over long-standing concerns over the rule of law. The Commission says that apart from media pluralism and court independence, Hungary also has a problem with corruption and there is a risk that even regular EU funds from the bloc’s 2021-2027 budget sent to the country could be misspent.

Poland will raise defence spending to the equivalent of five per cent of GDP, ruling party chairman Jarosław Kaczyński announced this week. That would be by far the highest relative level of spending in NATO at current levels. “We take security issues seriously,” said Kaczyński during a speech in the town of Płock. “We will [soon] devote three per cent of GDP to defence, and over time that will be five per cent.” This is being done “so that Russia will not attack us”, he continued, quoted by Polskie Radio. “Our allies will help us, but only when we are able to defend ourselves….We must be a cohesive, armed and brave nation.”

The World Bank and Romania this week signed today a 600 million euros Inclusive and Green Growth Development Policy Loan (DPL). Approved on June 30 by the World Bank’s board of directors, the loan is the first in a programmatic series of two financing operations, and is complemented by a 24.2 million US dollars grant provided by the Innovative Global Public Goods Solutions Fund of the World Bank. The loan and the grant support the Government in pursuing key structural reforms to strengthen social inclusion (including response measures to the humanitarian crisis) and fiscal management, foster decarbonisation and climate resilience.

The US Department of Justice announced this week that it had extradited dual Romanian / Latvian national Mihai Ionut Paunescu — known as “Virus” — to the US from Colombia for allegedly designing malware used to steal money from bank accounts across the world and operating the infrastructure used to distribute it. Paunescu is allegedly one of the creators of the Gozi Virus, a Trojan that infected millions of computers in countries including the US, UK, Germany, Italy, and Finland between 2007 to 2012.

The way we travel is changing, and emerging Europe is well placed to take advantage
Is Europe about to call Russia’s bluff over gas supplies?
Comment