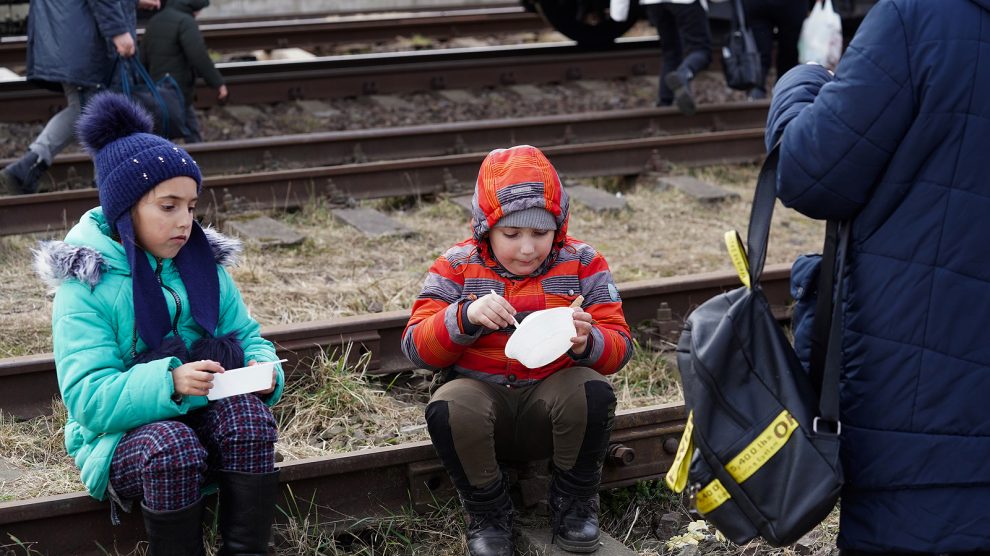 A month since Russia invaded Ukraine, the United States on Wednesday formally accused Russian forces of committing war crimes in Ukraine and said it would pursue accountability “using every tool available”.

“As with any alleged crime, a court of law with jurisdiction over the crime is ultimately responsible for determining criminal guilt in specific cases,” said US Secretary of State Antony Blinken, adding that the US would continue its efforts to gather evidence and share it with international institutions.

The chief prosecutor of the International Criminal Court meanwhile, Karim Khan, asked a coalition of countries to back his war crimes investigation in Ukraine. “Things can get worse” if the international community fails to act now, Khan warned.

The Ukrainian president, Volodymyr Zelensky, on Thursday appealed to NATO to increase military support for his country against Russian forces. Speaking to a summit of NATO leaders via video link, Zelensky thanked countries for the defensive equipment provided to Ukraine but appealed for offensive weapons.

Later on Thursday, Zelensky told a summit of EU leaders that their sanctions and support for Ukraine came a little late. “You have applied sanctions. We are grateful. These are powerful steps but it was a little late,” Zelensky said.

With Russia’s advance in Ukraine having effectively come to a halt over the past two weeks, the UK defence ministry on Thursday said that Russian forces have “almost certainly suffered thousands of casualties”. NATO has put the number of Russian casualties at between 7,000 and 15,000 troops.

The ministry added that Russia is likely now looking to mobilise its reservist and conscript manpower, as well as private military companies and foreign mercenaries, to replace its considerable losses.

In the city of Mariupol, which has been under siege from Russian shelling since the beginning of the war, the remaining population was on Thursday reported to be enduring “hellish conditions”.

An estimated 80 per cent of its infrastructure has now been decimated, with its electricity, water, heating and lines of communication all cut off and those attempting to flee forced to make their way through gun battles and past unburied corpses

United Nations estimates put the number of people forced to flee Ukraine at around 3.7 million as of March 22. Ukraine has accused Moscow of forcibly taking 402,000 civilians, including 84,000 children, from Ukrainian cities to Russia – and raised concerns that they would be used as hostages. Russia has corroborated the numbers but said the civilians has been evacuated willingly.

Russian President Vladimir Putin this week announced that Russia plans to demand payment in roubles for gas sales to “unfriendly” countries. The announcement sent European futures soaring over concerns the switch would exacerbate a looming energy crisis by jamming up deals that run to hundreds of millions of dollars every day.

The de facto authorities in Nagorno-Karabakh have accused Azerbaijan of cutting natural gas supplies to the territory for the second time in as many weeks, depriving the people there of heat for their homes amid a sharp cold spell. Nagorno-Karabakh gets its gas supplied via Armenia, through a pipeline that transits territory over which Azerbaijan regained control in the 2020 war between the two sides.

Bulgaria’s ex-prime minister, Boyko Borissov, leader of the former ruling GERB party, will appeal his arrest, his lawyer, Menko Menkov, said on Monday. Borissov, GERB party spokesperson Sevdelina Arnaudova and former Finance Minister Vladislav Goranov were arrested on Thursday last week and detained for 24 hours. All three were released on Friday without charges. However, on Monday, the Interior Ministry probed the three for alleged extortion.

Madeleine Albright, a Czech immigrant who went on to become the first female secretary of state in US history, died this week aged 84. A long-time foreign policy veteran, Albright became America’s top diplomat in 1997 during the Clinton government. Often hailed as “a champion of democracy”, Albright was instrumental in efforts to end ethnic cleansing in Kosovo. Born Marie Jana Korbelova in Prague in 1937 – in what was then Czechoslovakia – Albright was the daughter of a Czechoslovak diplomat who was forced into exile after the occupation of his country by Nazi Germany in 1939.

Serbian President Aleksandar Vučić said on Wednesday that Serbia would never recognise Kosovo despite having made all kinds of compromises. Vučić accused Kosovo Prime Minister Albin Kurti of abusing the Serbs, telling them they have no place in Kosovo and trying to destroy the unity of the Serbian people. “Serbian unity is not easily destroyed,” he told state Radio TV Vojvodina (RTV). Serbia will hold both presidential and parliamentary election on April 3.

Hungarian Prime Minister Viktor Orbán’s ruling Fidesz party extended its lead to two percentage points over an opposition alliance in a mid-March survey ahead of an April 3 parliamentary election. The poll, conducted by Republikon between March 16 and 18, put support for nationalist Orbán’s Fidesz at 41 per cent of the electorate, up one point from February levels, while the opposition was unchanged at 39 per cent. Orbán’s path to re-election is complicated by Russia’s invasion of Ukraine, which has put his decade-long close relations with Russian President Vladimir Putin in a new light.

North Macedonia produced a contender for shock result of 2022 by beating Italy at Palermo’s Stadio Renzo Barbera on Thursday in a World Cup play-off. The team ranked 67th in the FIFA World Rankings beat the reigning European champions 1-0 thanks to an Aleksandar Trajkovski winner in the 92nd minute. North Macedonia, who have never played at a World Cup, will qualify for the first time if they beat Portugal in a play-off final next Tuesday.

With election victory all but assured, Serbia’s president can take a harder line against Russia
Football has banned Russia from competitions, but more can be done
Comment