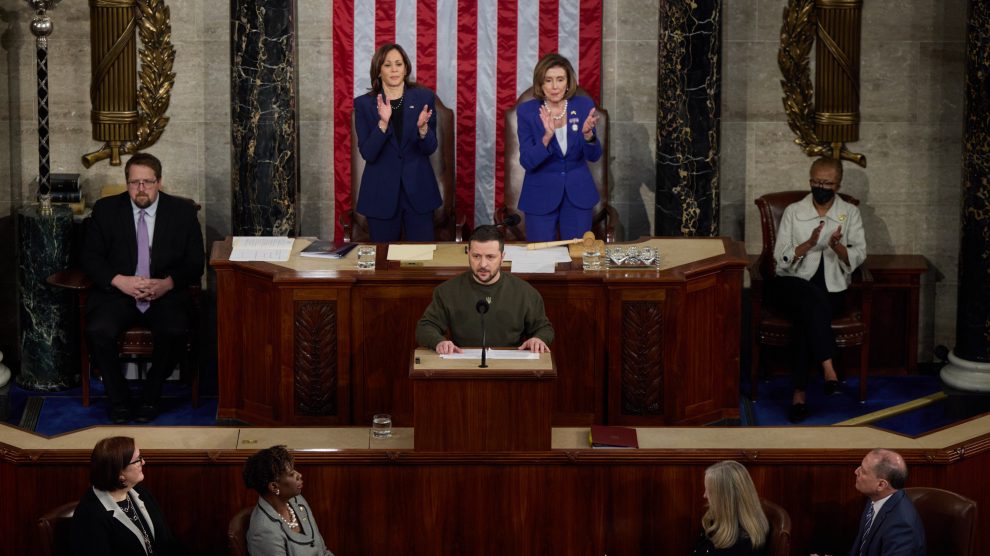 Ukraine is “alive and kicking” and will never surrender, President Volodymyr Zelensky said on Wednesday in a defiant address to US lawmakers on his first foreign trip since Russia’s invasion.

US military aid to Ukraine was not charity, but an investment in security for the future, Zelensky said.

As Ukraine’s most important ally, the US has already committed around 50 billion US dollars of humanitarian, financial and military assistance – far more than any other country. US President Joe Biden has pledged a new aid package of two billion US dollars and promised a further 45 billion US dollars next year, although that funding has yet to be approved by Congress.

In a pitch to any possible waverers, Zelensky told Congress that, “our two nations are allies in this battle and next year will be a turning point. I know it. The point when Ukrainian courage and American resolve must guarantee the future of our common freedom. The freedom of people who stand for their values.”

Among the defence aid announced by Biden on Wednesday is the Patriot surface-to-air missile defence system.

On Thursday, the Kremlin said US supplies of Patriot missile systems to Ukraine would not contribute to settling the conflict between Moscow and Kyiv, and would not prevent Russia from achieving its goals.

Kremlin spokesperson Dmitry Peskov said that the United States “and other countries” are “following the path of constantly expanding the range and raising the technical level of the weapons that they supply to Ukraine. This does not contribute to a speedy settlement of the situation, on the contrary.”

A former Russian deputy prime minister and a pro-Moscow official were injured when Ukrainian forces shelled the eastern city of Donetsk on Wednesday, Russian news agencies said on Thursday.

Donetsk, controlled since 2014 by troops loyal to Moscow, is in the industrial Donbas region, the centre of recent bitter fighting between Russia and Ukraine.

One of the injured men was Dmitry Rogozin, a former Russian deputy prime minister and head of Roscosmos, who is giving military advice to two occupied regions of Ukraine that Moscow claims as its own, an aide told Tass news agency.

Alexander Lukashenko, dictator of Belarus, said on Thursday that recent military manoeuvres were not aimed at Ukraine and dismissed “conspiracy theories” about deployments of Belarusian armed forces at the border.

Speaking at a conference of military leaders marking the end of snap military inspections held this month, Lukashenko also said he could not rule out “aggression” against Belarus on the part of unspecified “neighbours”.

Vladimir Putin visited the Belarusian capital on Tuesday, fuelling speculation that the Kremlin leader may be trying to pressure Lukashenko into joining a possible new ground offensive in Ukraine.

Slovakia’s president formally dismissed the country’s government last Friday, a day after it lost a no-confidence vote in parliament, and set the framework for holding an early election by mid-2023. President Zuzana Čaputová gave parliament a deadline by the end of January to amend the Constitution, which would make a snap election possible. Čaputová said the ballot should then take place in the first half of 2023. “I personally will do all I can to contribute to the country’s orderly transition to an early election,” Caputova said.

Armenian Prime Minister Nikol Pashinyan has warned that the humanitarian situation in the breakaway region of Nagorno-Karabakh has become precarious as groups of protesters continue to block the Lachin Corridor. The route is the only land connection across Azerbaijani territory between Armenia and the Nagorno-Karabakh region, and shops and businesses in Yerevan and Stepanakert are beginning to feel the effects after more than a week without deliveries. “The situation is extremely tense as a result of the illegal blockade by Azerbaijan of the Lachin Corridor,” Pahsinyan said during a cabinet meeting on Thursday, adding he had made a proposal to Azerbaijan to end the standoff.

Meanwhile, the leader of Azerbaijan’s Nakhchivan exclave resigned on Wednesday, ceding control over a fiefdom he has ruled for almost three decades. Known for running the most repressive corner of authoritarian Azerbaijan, 62-year-old Vasif Talibov cited health issues, though rumours had been circulating for weeks that the central government in Baku wanted greater control. The Nakhchivan Autonomous Republic of Azerbaijan is a region long known by Baku activists as their country’s own “North Korea.”

The European Union will look into Kosovo’s application to join the bloc as soon as Sweden takes over the rotating presidency in January. The bid will have to be carefully mulled as it’s a sensitive issue for many member states, according to a person familiar with the matter who spoke on condition of anonymity. Five of 27 EU states haven’t recognised Kosovo as a country following its unilateral declaration of independence from Serbia in 2008. Serbia refuses to accept Kosovo’s secession and the lingering enmity leads to recurring escalation, including an ongoing one with local Serbs in northern Kosovo blocking roads.

Less enthused about the EU is Hungary’s prime minister, Viktor Orbán, who on Wednesday said it’s time to “drain the swamp”, something he suggested could lead all the way to dissolving the European Parliament. In an annual international news conference in Budapest, Orbán said a recent corruption scandal involving several members of the parliament had drawn into question the credibility of the institution, and that he supports abolishing the body as it currently exists. “The Hungarians would like for the European Parliament to be dissolved in its current form,” Orbán said.

Police in North Macedonia said on Wednesday that they had arrested nine people, including a police officer, on suspicion of smuggling dozens of migrants through the country. The nine, who are all Macedonian nationals and include two minors, were arrested during raids on 11 locations in the capital, Skopje. Another two men were being sought, police said. Three men from Middle Eastern countries who have not been arrested are believed to have led the group, which is accused of having smuggled people from Afghanistan, Pakistan, Syria and other countries from Greece to North Macedonia on their way to Serbia and then wealthier European countries.

Bulgaria’s only nuclear plant on Thursday signed a deal with Westinghouse Electric Sweden to provide nuclear fuel for one of its reactors, in a bid to diversify its energy supplies. The Kozloduy plant currently uses nuclear fuel supplied by Russian firm Rosatom to operate the two Russian-designed VVER-1000 nuclear reactors that generate about one-third of the EU country’s electricity.

The number of foreigners with residence permits in Poland has more than tripled in a year to reach 1.66 million, new data show. The majority of that increase is accounted for by the arrival of Ukrainian refugees, though other forms of migration to Poland have also been rising rapidly. There are now 1.36 million Ukrainians with valid residence permits (constituting around 3.5 per cent of Poland’s population), Jakub Dudziak, spokesman for the government’s Office for Foreigners (UdSC), told the Polish Press Agency (PAP). The next most numerous national groups are Belarusians (66,200), Georgians (18,400), Russians (18,400), Germans (18,000), Indians (13,800), and Vietnamese (12,500).

Less government, more gas, better public transport, and greater protections for property rights; those were just some of the promises made by Uzbekistan’s president, Shavkat Mirziyoyev, in his state of the nation speech before parliament on Tuesday. The country is enduring a particularly troubled winter of power outages and fuel shortages and looks poised to record economic growth below expectations. Finance Minister Timur Ishmetov revealed earlier this week that ­­the economy is projected to grow by 5.5 per cent this year, which falls short of the 7.4 per cent recorded in 2021 and what had been projected by officials earlier in the year.

Photo: Volodymyr Zelensky addressing a joint session of the US Congress. Ukrainian Presidency.

What you read on Emerging Europe in 2022
Can the EU aim for the moon? 
Comment