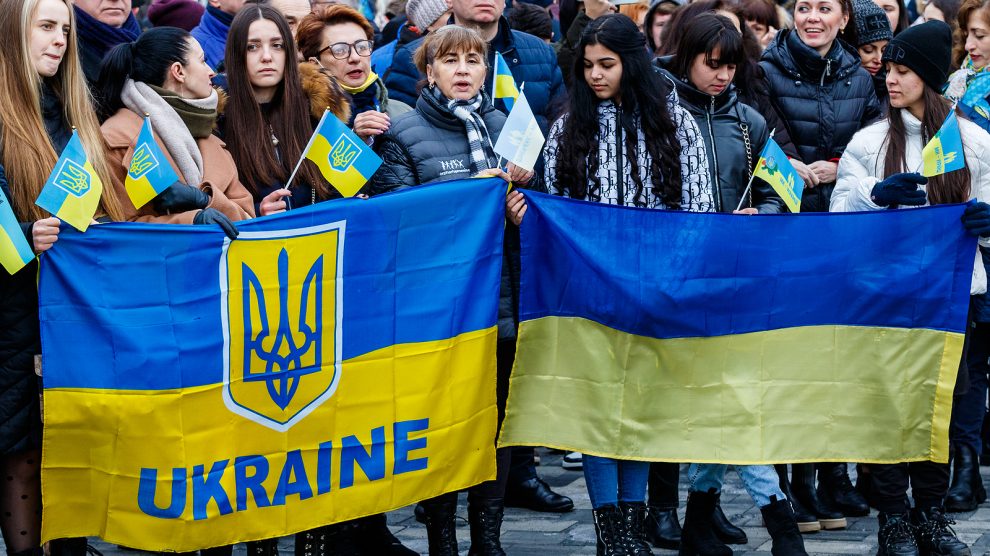 Ukrainian President Volodymyr Zelensky said on Thursday that he doesn’t believe Russia’s vows, made on Tuesday, to de-escalate its fighting. In a televised speech, Zelensky said peace talks with Russia continue “but for the moment there are just words, nothing concrete”. The Russian defence ministry did announce, however, a local ceasefire on Thursday to allow civilians to be evacuated from Ukraine’s besieged port city of Mariupol.

Zelensky told the Australian parliament this week that his country is “undefeatable” against Russia as long as it can count on the support of the global community. In a virtual speech to MPs and senators in Canberra, the Ukrainian president requested Australia send Bushmaster armoured vehicles to assist in the fight against Russia, saying they would “do much more for our common freedom and security than staying parked on your land”.

The US said on Wednesday that Russian forces have begun to pull out of the defunct Chernobyl nuclear power site, which they seized on the first day of the invasion on 24 February. An employee at Ukraine’s exclusion zone management agency claimed on Facebook that some soldiers had been taken to a special medical facility with acute radiation sickness, but this has not been confirmed.

More than four million people have fled Russia’s “utterly senseless” war on Ukraine, the United Nations said on Wednesday. The UN said 4,019,287 people had fled abroad since the start of Russia’s invasion on 24 February, surpassing its initial estimate that the war would create up to four million refugees. More than 90 per cent are women and children.

Hungary’s government meanwhile has been accused of inflating the number of Ukrainians it is sheltering as it seeks to secure European funds to finance their welfare. Zoltan Kovacs, the government’s international spokesperson, said Hungary had welcomed more than 540,000 people escaping the conflict, a figure he said amounted to between five and six refugees for every 100 Hungarian inhabitants. However, the Hungarian Helsinki Committee, a human rights NGO dedicated to helping refugees, called the statistics “misleading” and said most of those arriving subsequently travelled on to other countries.

The Economist Intelligence Unit (EIU) this week said that the Ukrainian economy will register a 46.5 per cent recession this year, amid human casualties, the destruction of infrastructure and bleak prospects for the reconstruction of the country. Its forecasts remain subject to caution, but it does not believe that Ukraine’s GDP will recover to pre-war levels for more than a decade (in the late 2030s).

Selected Ukraine-based start-ups will be announced on a rolling basis and will receive up to 100,000 US dollars in non-dilutive funding as well as ongoing Google mentorship, product support and Cloud credits.

“Support for Ukrainian-led start-ups will help them succeed and build the tech that their country needs now. And as the region starts to recover, start-ups and tech companies will be key to rebuilding the Ukrainian economy, creating jobs, and positively impact the cities they make their homes,” said Agnieszka Hryniewicz-Bieniek, senior director Google for Startups.

The breakaway Georgian region of South Ossetia will seek to join Russia, potentially leading to a new escalation in the Kremlin’s conflict with the West. The self-declared republic of about 50,000 will start the legal process to become part of Russia, South Ossetia’s President Anatoly Bibilov said in a statement posted on the website of Russia’s ruling party. The move comes after Russia’s invasion of Ukraine, which President Vladimir Putin launched after recognising two Kremlin-backed separatist regions in the country’s east.

Hungarian Prime Minister Viktor Orbán’s ruling Fidesz party maintained a slim lead over an opposition alliance before Sunday’s parliamentary election, a survey by the think tank IDEA Institute showed on Thursday. The poll, conducted between March 22 and 28, put support for Orban’s nationalist Fidesz at 41 per cent of the electorate, up from 40 per cent in early March, while the six-party opposition alliance stood at 39 per cent, gaining two points from the previous survey.

Serbian voters also go to the polls on Sunday to vote in presidential, parliamentary and municipal elections. The incumbent president, Aleksandar Vučić, and his ruling Serbian Progressive party (SNS) are almost certain to extend their spell in power into a second decade.

Talks on Albania’s and North Macedonia’s accession to the European Union need to start as soon as possible because any delay will make Western Balkans vulnerable to outside influence, German Chancellor Olaf Scholz said on Monday. “It is clear for both Germany and Sweden that the EU must push ahead with institutional reforms to make itself capable of enlargement,” Scholz said in a news conference after meeting Swedish Prime Minister Magdalena Andersson.

The official results of the September 2021 national headcount, published on Wednesday, show North Macedonia’s population has shrunk by 9.2 per cent over two decades since the last census. The population now stands at 1,836,713, which is 185,834 people less than the number recorded in the previous census conducted in 2002. Results show the average age of the population is just over 40, and 207 settlements in the country, predominantly villages, are now empty of people.

Armenian Prime Minister Nikol Pashinyan said Thursday he will meet with Azerbaijani President Ilham Aliyev in Brussels on April 6 and for talks to end the decades-long conflict over the separatist region of Nagorno-Karabakh. There have been recent clashes that have raised concerns about the stability of a cease-fire that ended the 2020 war over the separatist region. “I hope to discuss at this meeting with the president of Azerbaijan and agree on all issues related to the start of negotiations on a peace agreement,” Pashinyan told a government meeting Thursday.

Netflix will open an office in Warsaw, which the streaming giant says will act as its regional hub for Central and Eastern Europe, covering Netflix operations across Poland, Romania, Czechia, Hungary, Croatia and Ukraine. According to the company’s own figures, Netflix has invested more than 490 million złoty (115 million US dollars) in Polish originals and claims to have created some 2,600 jobs in the region.