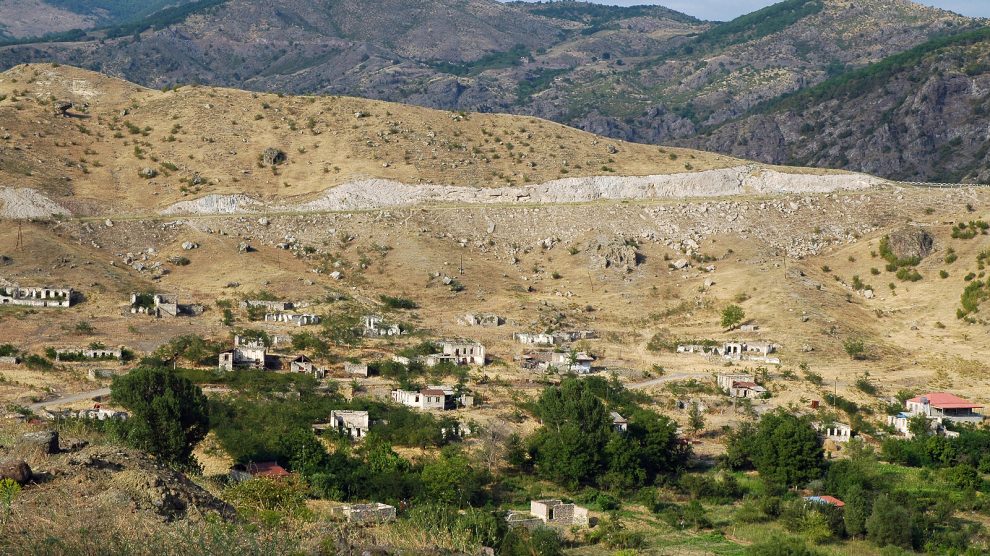 Azerbaijan wants to make Nagorno-Karabakh a model of sustainability, based on the use of renewable energy and the development of what it calls “smart villages”.

Azerbaijan has made no secret of its plans to revitalise the economy of Nagorno-Karabakh ever since it regained control over the majority of the disputed region last year, following a 44-day war with Armenia.

Its first concern is energy.

The end of the war left Baku in control of a 36 hydropower plants in Karabakh, as well as the Kelbajar and Lachin regions. Prior to the conflict, the territory produced all of its own electricity and even exported some to Armenia. It was one of the few areas in which Karabakh’s authorities did not depend on Yerevan.

According to a report by the Electricity and Energy Efficiency Department at the Azeri Ministry of Energy, after the war ended, Armenian forces destroyed a number of power plants as they retreated. However, Armen Tovmasyan, Karabakh’s de facto Minister of Economy and Agriculture, has denied these allegations, claiming that even though some infrastructure was damaged during the fighting, the plants were not destroyed.

In February, just three months after the ceasefire agreement was reached, a medium-sized hydropower plant was reopened in the village of Gulabird in the Lachin region.

Azerbaijani President Ilham Aliyev, who was at the inauguration ceremony, said that the powerplant had “great significance” as “renewable energy has huge potential” for the region’s development.

In summer, other two medium-sized plants in the Terter region, Sugovushan-1 and Sugovushan-2, were put back to work. The plants used to be owned by Armenian company Artsakh HEK and operated under different names, Mataghis-1 and Mataghis-2.

Under Baku’s control, these plants are owned by the state and are operated by a state-owned energy firm, Azerenergy.

Two other power plants, Khudaferin and Maiden, are being constructed on the Araz River, which also serves as the border between Azerbaijan and Iran. The construction of these plants began under Soviet rule but was interrupted after the first Karabakh War in 1993 when the region fell into Armenian hands. Nevertheless, Iran continued with the project on its side of the river.

In 2016, Azerbaijan and Iran made a deal to continue the construction of the power plants, even though Baku at the time had no control over the territory. The power plants are now expected to start producing energy in 2024: output will be shared equally between Tehran and Baku.

Aside from hydropower plants, the Azerbaijani government is planning to build wind and solar energy facilities and transform Karabakh into what it has called a “green energy zone”. According to Azerbaijani Energy Minister Parviz Shahbazov, electricity in the Karabakh region will be produced entirely through green energy sources.

The region’s energy production is so important that the loss of the territories has negatively affected the energy security of the Yerevan-controlled part of Karabakh, and even Armenia itself.

Electricity transfers between Armenia and Karabakh have been interrupted after the Kelbajar region, which was crossed by energy transmitting lines, was ceded to Azerbaijan.

According to Murad Muradov, deputy director of Topchubashov Centre, a Baku-based think tank, Armenia’s energy vulnerability has considerably increased as a result of the de-occupation of Karabakh.

“Now, clear signs of persistent supply problems which cannot be fundamentally resolved without cooperation with the Azerbaijani authorities.”

The Azerbaijani government is also now preparing to resettle its citizens in the territory it retook during the war.

Baku has said that it wants to build “smart villages”, which will accommodate hundreds of thousands of internally displaced people. The smart village is a concept focused on holistic rural development and implies small communities aimed at maximising economic development through the use of modern technologies of automation and renewable energy.

The government has been also planning to expand the “agroparks” system: large-scale, government-subsidised agribusiness enterprises, to further accelerate the redevelopment of rural Karabakh.

While agroparks have been operating in Azerbaijan in 2012, the idea of smart villages is new, seen by Baku as a way of resettling more than 600,000 displaced Azerbaijanis.

Azerbaijani media have been hyping the smart village concept extensively, citing the government’s statement on the use of automation that will significantly reduce human labour. On October 17, Minister of Agriculture Inam Karimov stated that smart villages would be implemented using green and alternative energy and a smart management system. He added that the villages would be surrounded by smart farms.

According to President Aliyev, the first project would be implemented in the Zangilan district, where people could return “by the end of this year [2021] or early next year [2022]”. In October, he laid a foundation stone for a smart village in the district of Fuzuli.

While Baku has planned to invest 1.3 billion US dollars in the project, there are several challenges facing the efficient implementation of the project.

“In my opinion, there are two major potential threats that could forestall the success of projects: the lack of comprehensive infrastructure and broad mismanagement (including corruption),” Muradov tells Emerging Europe. “The cost is also a challenge. That’s why the government has been so active in attracting foreign capital.”

Muradov adds that the Azerbaijani government is – at least in its declarations – keen to improve transparency and do away with corruption and unnecessary expenditure.

“These SOEs are bound to play a key role in the reconstruction of Karabakh, so it is very important to minimise mishandling of public property and increase the management competencies,” he says.

Muradov believes that the key to the implementation of smart villages and agroparks in Karabakh is progress in Azerbaijani-Armenian negotiations and the active willingness of the two countries to avoid a restart of the conflict.

“In a positive scenario the ideas which are now mostly on paper will be convertible into reality in about four to five years,” he concludes.