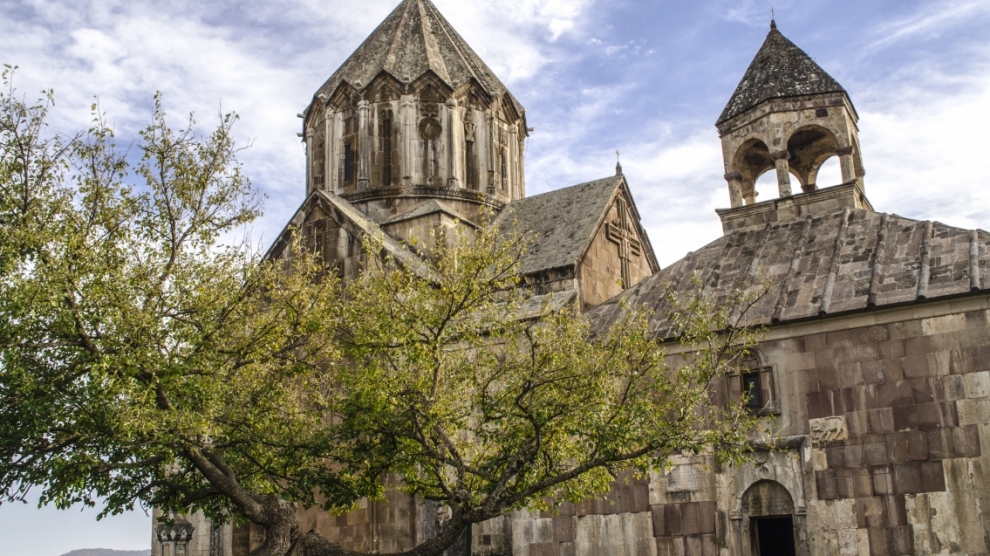 As Azerbaijan takes control of much of Nagorno-Karabakh, international scholars raise the alarm over the future of the region’s rich Armenian heritage.

The Russian-brokered peace deal signed by Armenia and Azerbaijan earlier this month reinforced Azerbaijan’s claim over much of the contested region of Nagorno-Karabakh, reversing the situation on the ground before the commencement of hostilities in September. Although the region has been de jure part of Azerbaijan territory since the Soviet period, ethnic Armenians have been in control since the last major conflict between the two countries came to an end in 1994.

With the transfer of control being carried out under the supervision of Russian peacekeeping troops, a number of international scholars, including Professor Adam Smith, director of the Cornell University Institute of Archaeology, and Lori Khatchadourian, professor of Near Eastern Studies at Cornell, have expressed concern over the fate of the Nagorno-Karabakh’s rich archaeological heritage.

“Nagorno-Karabakh is geographically small, but it hosts vital heritage sites and important archaeological resources,” says Professor Smith, while Khatchadourian adds, “Given the timeframe for withdrawal, Armenians have mere days to document and safeguard the cultural heritage at risk. They will leave behind historic churches, monasteries, and other monuments that will be gravely imperiled.”

The heritage sites in question, believed to number at around 4,000, range from artifacts of religious and civil importance to the Armenian people to memorials of historical figures and art, as well as remains of ancient settlements.

The religious heritage that is said to be under threat includes the Holy Saviour Cathedral in Shushi, also known as the Ghazanchetsots Cathedral. The church was founded in 1888 and is 35 meters tall, making it one of the largest of Armenian Apostolic churches of its kind. The monument suffered damage during the 1920s, the 1990s, and was also hit by shelling this year.

The cathedral used to be home to 17th century Armenian manuscripts, which have since been moved. Manuscripts dating back to the 13th century have also been removed from monasteries in Nagorno-Karabakh and transported to the Armenian capital Yerevan since the new peace agreement was signed.

Another site that must be protected is the monastery complex of Gandzasar (pictured above). Founded in 1216, the complex is located in one of the northern regions of Nagorno-Karabakh, which has since November 15 been under full Azerbaijani control. It has been described as one of the most historically valuable Christian temples in the region, recognised amongst scholars for the decorations adorning the dome of the main building.

Some archaeological artifacts related to Armenian culture found in the contested territory date back to an even earlier period. The second and first century ruins of the Armenian city of Tigranakert are located in the eastern part of Nagorno-Karabakh, now under the control of Baku as per the peace agreement.

Doubts as to whether Azerbaijani institutions will be willing to look after Armenian historical sites in the region have arisen ever since the country’s museums publicly supported the war between the two nations.

On October 7, the Azerbaijan National Art Museum, and the National Carpet Museum, both based in Baku, made a donation to the Azerbaijani armed forces, commenting: “The glorious sons and daughters of the homeland gathering all their strength on the front line and at the rear are ready to fight against the enemy on the battlefield for the liberation of the occupied lands of Azerbaijan and the restoration of the territorial integrity of the country, as is our civic duty.”

Nonetheless, in response to being accused of targeting the Armenian Cathedral in Shushi in October, a spokesperson for the Azerbaijani defence ministry said that “the damage to the church [in Shushi] has nothing to do with the activities of the Azerbaijani army.” He added that the country’s forces “do not target historic, cultural and especially religious buildings and monuments.”

“If it does, treasures of human history will be lost forever,” he says.

More than a year prior to the latest resumption of fighting, in February 2019, the New York-based art journal Hyperallergic published a report describing Azerbaijan’s destruction of Armenian history as “the worst cultural genocide of the 21st century”.

It catalogued what it calls “systemic” erasure of any traces of Armenian culture within Azerbaijan’s borders, and is believed to have led to the destruction of 89 medieval churches, 5,849 cross-stones unique to Armenian burial tradition, and 22,000 other tombstones, making the magnitude of the destruction greater than that seen in Iraq and Syria while in the hands of the Islamic State.

Footage taken from Iran’s northern border taken in December 2005 shows Azerbaijani soldiers demolishing Armenian graves from the 17th century Julfa cemetery and loading them onto trucks. The footage compelled the European Parliament to investigate the situation but was barred from doing so by Azerbaijan. A journalist from the Institute for War and Peace Reporting visited the area in 2006 and reported that there are no longer any visible traces of the cemetery.

UK newspaper The Guardian has claimed that Azerbaijan bans all official international visits to Julfa or any other Armenian sites proven to have been destroyed, while denying that Armenians have ever lived in the Nakhchivan region, where Julfa was located.

Amongst those speaking out against Baku’s actions is the Azeri novelist, playwriter and former member of government Akram Aylisli, who is from the Nakhchivan region himself.

He is also one of the few public figures in the country to openly acknowledge past violations carried out by the Azerbaijani state. Since publishing his writings on the repeated genocide of Armenians, Aylisi has faced a book-burning campaign targeting his work and calls from Azerbaijani leaders to have his ear cut off. In 2016, he was detained at Baku Airport while on his way to a literary festival in Venice, Italy.

As Azerbaijan takes control of Nagorno-Karabakh, international attention has rightly been focused on what is the future will look like for the tens of thousands of Armenians who were living in the region and have sought refuge in Armenia. However, the world also needs to start focusing on the significant parts of Armenian history and culture they have left behind.