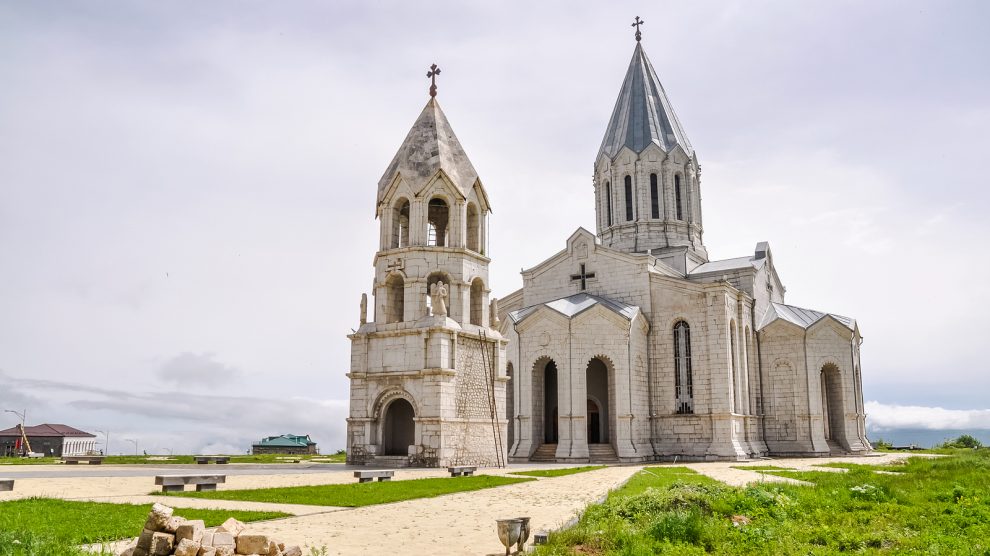 Azerbaijan’s plans to renovate and reconstruct the historical city of Shusha are under fire from both Armenians – concerned about cultural erasure – and from Azeris who are critical of the lack of transparency around the process.

Almost immediately after its victory in last year’s war with Armenia in Nagorno-Karabakh, Azerbaijan began announcing ambitious plans to economically revitalise those areas of the disputed region that are now under its control for the first time in almost three decades.

The government identified the resettlement and reconstruction of what it calls “newly-liberated areas” as a cornerstone of its 2030 Strategy, a project centered on the historical city of Shusha.

Shusha, known as Shushi by Armenians, had been in Armenian hands since the first Karabakh War, which ended in 1994. It was founded in the middle ages by Armenians, and served as the capital of the Karabakh Khanate, a Turkic princedom that was under the suzerainty of the Persian Empire, before falling to the Russian Empire in the early 19th century.

During the short-lived Democratic Republic of Armenia and the Azerbaijani Democratic Republic, disputes over the town (which was ethnically mixed between Azeris and Armenians) escalated into a pogrom of the Armenian population in March 1920. After the Bolsheviks established control over modern day Armenia and Azerbaijan, they gave Nagorno-Karabakh, with Shusha as its administrative centre, autonomous status within the Azerbaijani Soviet Socialist Republic.

This contested history has made Shusha a particularly inflammatory point of the conflicts between Armenia and Azerbaijan. Azerbaijan’s recapture of Shusha was the last major battle of the most recent war in Nagorno-Karabakh.

Azerbaijani President Ilham Aliyev quickly declared Shusha as his country’s “cultural capital” and announced his intention to transform it into a cultural hub for the broader Turkic and Muslim world.

In early May, Armenian sources began reporting that the pointed dome of the 19th century Ghazanchetsots Cathedral, an Armenian Apostolic church in Shusha, had been removed. Images surfaced of the building covered in scaffolding.

This prompted a major outcry from the Armenian government and representatives of the Armenian community all over the world. A statement from Armenia’s ministry of foreign affairs branded the construction work an “act of vandalism”, while David Babayan, the foreign minister of the Armenian-controlled portion of Nagorno-Karabakh went even further and called it “cultural genocide”.

Azerbaijan has acknowledged that it is “restoring” the cathedral, along with other historic buildings “in accordance with the original architectural style in order to restore the historical image of Shusha”.

The statement made no mention of the Armenian heritage of these sites, nor made any reference to many of the historic buildings that re the parish property of the Armenian Apostolic Church.

This has raised fears about Azerbaijan destroying Armenian cultural heritage in the newly recaptured areas of Nagorno-Karabakh. Already, there have been reports that at least one Armenian cemetery has been destroyed, as well as at least one church. However, it should be noted that the church in question was a recently-built chapel located on a military base.

These fears have been validated by some of President Aliyev’s statements. Shortly after the November ceasefire, Aliyev visited historical sites in some of the newly recaptured territories, including churches. In one video, he orders medieval Armenian inscriptions to be removed from a church in Hadrut – he claims that the church was built by Caucasian Albanians, an extinct ethnic group indigenous to the Caucasus (and unrelated to Balkan Albanians) and that Armenians had been stealing their heritage.

This brazen rewriting of history has exacerbated Armenian concerns about their history being erased from one of their historical homelands. The renovation of the Ghazanchetsots Cathedral in Shusha is also being justified on similar grounds – some Azerbaijani commentators have made statements arguing that the fate of the cathedral is up to the Udin people. The Udin are a tiny ethnic group, numbering around 10,000 people, who are considered to be the closest descendants of the Caucasus Albanians.

Azerbaijan’s grand projects in the newly recaptured areas of Nagorno-Karabakh have also attracted criticism from within the country, albeit of a very different nature.

According to reports from local media, British architecture firm Chapman Taylor was contracted to design the master plan for the renovation of Shusha. Critics claim that no tender had been announced on government channels, an unusual practice for a multimillion US dollar contract. The same critics also claimed that there has been no announcement of which construction firms are participating in ongoing projects throughout Shusha and wider Nagorno-Karabakh, other than a vague statement by Aliyev that these would be from “friendly countries”.

Ali Karimli, an opposition leader in Azerbaijan, also drew attention to local residents’ complaints that they had no input into the renovation processes. The BBC’s Azerbaijan service also reported that some locals (including Azeris who were displaced from Shusha in the first war) were angry at demolition being carried out in Shusha, which threatened the uniqueness of the town.

Regardless, Azerbaijan feels that it has the right to restore its own cultural heritage damaged during the years Shusha was in Armenian hands and to make the area livable again. Many mosques and Azerbaijani historical sites, such as the homes of prominent poets and composers, had been allowed to fall into disrepair during Armenian rule.

However, such projects can be undertaken without violating another culture’s heritage and history.

Azerbaijan, despite official statements emphasising its secular, multi-ethnic character, appears to be behaving more like a conqueror in the newly-recaptured territories, rather than a magnanimous victor. This unfortunately directly threatens many of the remarkable historical sites in Nagorno-Karabakh, both Armenian and Azeri, as well as key parts of Armenia’s culture.