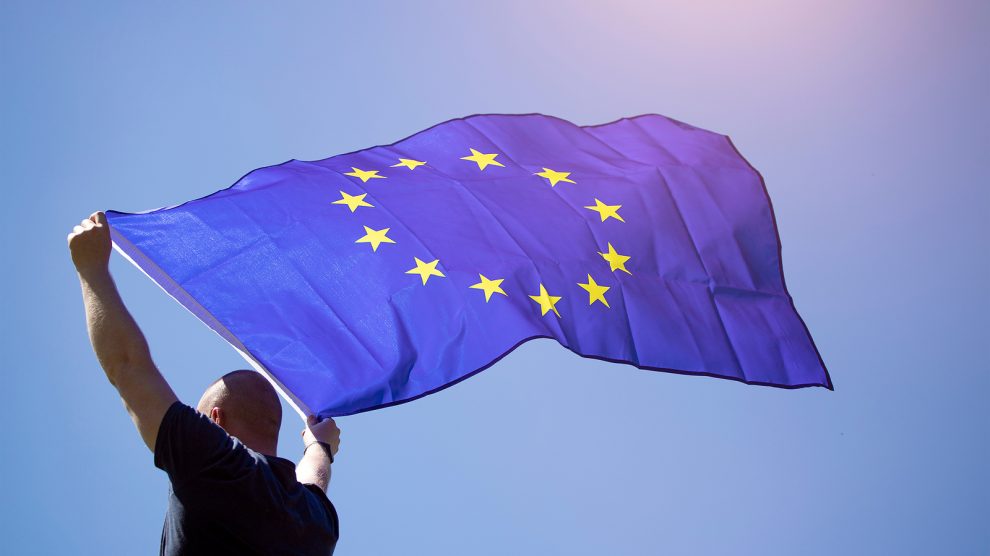 EU hopefuls Ukraine, Georgia and Moldova have been asked to complete application questionnaires, the first step on the long road towards membership. But what’s in an EU questionnaire?

Ihor Zhovkva, deputy head of Ukrainian President Volodymyr Zelensky’s office, confirmed on April 18 that the country had completed a questionnaire which will form a starting point for the European Union to decide on membership for Kyiv.

European Commission President Ursula von der Leyen handed the questionnaire to Zelensky during her visit to Kyiv on April 8, pledging a speedier start to Ukraine’s bid to become a member of the EU following Russia’s invasion of the country.

Ukraine formally submitted a bid to join the EU in early March, shortly after the invasion began, and was followed within days by Georgia and Moldova, which were handed their respective questionnaires on April 11, on the sidelines of the the Foreign Affairs Council in Luxembourg.

“Today, I can say that the document has been completed by the Ukrainian side,” Zhovkva told the Ukrainian public broadcaster on Sunday evening.

The EU uses the questionnaires to assess the readiness of applicant countries for membership according to three accession criteria defined at the European Council in Copenhagen in 1993, and usually referred to as the Copenhagen criteria.

Specifically, it deals with three key areas: political criteria, such as stable institutions guaranteeing democracy, the rule of law, human rights and respect for and protection of minorities; economic criteria, such as a functioning market economy and the capacity to cope with competition and market forces in the EU; and the EU acquis criteria which included the ability to take on and implement effectively the obligations of membership, including adherence to the aims of political, economic and monetary union.

The questionnaire is a formal instrument through which the Commission assesses the state of play and readiness of applicant countries to move forward in the accession process, namely to be granted candidate country status and open accession negotiations.

The questionnaire includes both simple and complex questions aimed at providing precise information about the country, from the respect for political and economic criteria, to the extent of compliance with EU legislation, as well as information on institutional and administrative capacities necessary for the acceptance and implementation of EUs legislation in each of the 33 policy areas of the EU acquis (such as agriculture, competition, public procurement, education and culture).

The number of questions can vary depending on the country. For example, in case of Croatia, the most recent addition to the EU (Croatia became an EU member in 2013) there were 4,560, while in case of the current candidate countries North Macedonia there were 4,666, Montenegro 2,178 and Serbia 2,486 questions.

It is not yet clear how many questions were included in the Ukrainian, Georgian, and Moldovan questionnaires.

Applicants are usually given a three-month indicative deadline to complete the questionnaire but the European Commission has long stipulated that “quality is more important than speed” and that the applicant country may take more time to reply in order to achieve a higher quality of the answers.

The quality of the responses is of extreme importance for an accurate assessment of the situation in the country.

According to the Commission, “based on lessons learned from other countries which have gone through this process, it is not uncommon to have subsequent exchanges and follow up questions until all information received from the applicant country is deemed satisfactory”.

Once in possession of the completed questionnaires, the European Commission prepares a formal “opinion”, a document which thoroughly analyses the country’s legal and constitutional framework as well as implementation of the country’s legislation against the entire body of EU laws, norms and regulations.

The opinion includes an extensive “analytical report” covering all the Copenhagen criteria, including 33 policy chapters of the EU acquis as well as conclusions and potential recommendations to the EU Council related to the granting of candidate country status and the opening of accession negotiations.

Upon completion of the opinion preparation process, the timing of which depends on the administrative capacity of the country to deliver, the Commission submits its opinion to the EU Council for a political decision on the next step on the country’s EU path.

At the same time, if the country does not sufficiently meet the requirements to move ahead in the process, the Commissions outlines in the opinion the specific reforms, also known as “key priorities”, which need to be delivered upon by the applicant country in order to move forward.

Importantly, answers to the questionnaire are a core element of the information gathering process, but not the only one. In parallel, the Commission deploys many expert missions and peer reviews with EU member states’ experts, notably to check the level of implementation of the legislation.

The Commission also receives independent expert reports and hosts consultations with civil society organisations, international organisations and other stakeholders to feed information in the assessment.

In this respect, the Commission encourages a participatory process whereby any interested stakeholder, ranging from international organisations to civil society, is welcome to submit information.

Goodwill may not be enough

The entire process – from inviting the European Commission to draft the opinion and its actual delivery – may last up to one year or longer. Von der Leyen has suggested that for Ukraine at least, this could be sped up to a matter of weeks, but the decision to offer Ukraine applicant status and begin accession talks is ultimately a political one.

At the last EU Council meeting, held at Versailles in March, some EU leaders emphasised once again that a speedy path to block membership was impossible.

“There is no such thing as a fast track,” Dutch Prime Minister Mark Rutte said.

“I want to focus on what can we do for Volodymyr Zelensky tonight, tomorrow, and EU accession of Ukraine is something for the long-term — if at all,” he stressed.

Eastern members of the EU, notably Poland, have been more forthright in demanding that a way be found to speed up Ukraine’s application.

But the joint statement from EU leaders that emerged from Versailles was non-committal.

It said only that the European Council had “acted swiftly” and invited the European Commission to submit its opinion on Ukraine’s application for membership “in accordance with the relevant provisions of the Treaties.”

“Pending this and without delay, we will further strengthen our bonds and deepen our partnership to support Ukraine in pursuing its European path. Ukraine belongs to our European family,” the statement said.

All three countries – Ukraine, Georgia, and Moldova – already have association agreements with the EU, which aim to align their economies in areas such as workers’ rights, and deepen political ties. All three are also part of the bloc’s Eastern Partnership and European Neighbourhood Policy.

But the reality – as unpalatable as it may be in Kyiv, Tbilisi, and Chișinău, and despite the speedy completion of the questionnaires – is that full membership is unlikely anytime soon. As Rutte pointed out, there is currently no such thing as a fast-track to EU membership, and it could take years for Brussels, whose bureaucracy is notoriously unwieldy, to create one, even if it has the political will to do so.