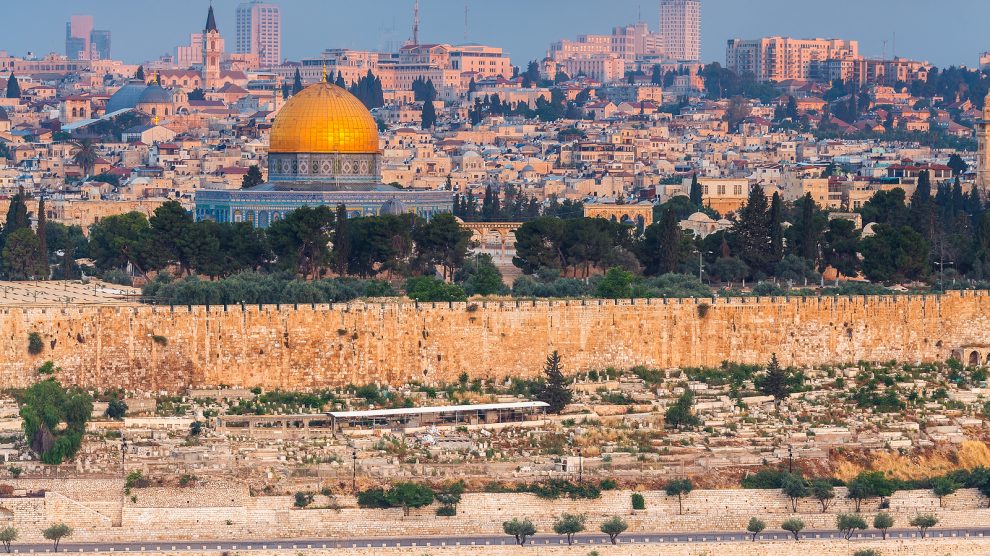 Kosovo and Israel sign mutual recognition deal, but the Balkan state’s pledge to open an embassy in Jerusalem risks irking the European Union.

At first glance, Kosovo and Israel have little in common, not least as Kosovo, Europe’s youngest country, is populated predominantly by Muslims.

However, since declaring independence from Serbia in 2008 the state has sought to follow a strictly secular path. Its acting president, Vjosa Osmani, is female, as is the country’s foreign minister, Meliza Haradinaj-Stublla.

It was Ms Haradinaj-Stublla who on February 1 signed an agreement that formally established diplomatic relations between the two countries, in a ceremony which, due to Covid-19 restrictions, was held over Zoom.

Controversially, Kosovo also recognised Jerusalem as the capital of Israel – a move that puts it at odds with the rest of the Islamic world, and which has also brought condemnation from the European Union.

“Kosovo has identified EU integration as its strategic priority. The EU expects Kosovo to act in line with this commitment so that its European perspective is not undermined,” said an EU spokesperson.

For Israel, which like Kosovo has struggled for recognition since its creation as a Jewish state in 1948, the deal with Kosovo is part of its wider effort to normalise relations with Arab and Muslim countries under agreements sponsored by former US President Donald Trump.

Trump announced the two countries would recognise each other in September, a side deal to an economic agreement between Kosovo and Serbia. As part of the deal, Serbia, which has long had diplomatic ties with Israel, also agreed to open an embassy in Jerusalem.
“Kosovo has waited for a very long time to establish diplomatic relations with Israel,” said Ms Haradinaj-Stublla.

“We mark a new chapter in the historical bond between our two countries who have witnessed a long and challenging path to existing as a people and to becoming states,” she added.

Israel has over the past few months established diplomatic relations with several Arab states, including the United Arab Emirates, Bahrain, Morocco and Sudan.

These agreements, known collectively as the Abraham Accords, triggered criticism in many majority-Muslim countries which have previously shunned Israel in opposition to its illegal occupation of the West Bank, as well as Lebanese and Syrian territories, and its blockade of Gaza.

Until now, however, Arab parties to the Abraham Accords have all maintained that their diplomatic missions in Israel will be in Tel Aviv. Kosovo will be the first to open an embassy in Jerusalem.

Jerusalem is disputed between Israel and the Palestinian territories. Israel considers the entire city to be its capital, whereas the Palestinians claim the eastern part of the city as the capital of their future state.

Only two countries – the United States and Guatemala – currently have embassies in Jerusalem, although others, including Malawi and Honduras, have pledged to make the move in coming months. Kosovo is set to open its embassy in the city by the end of March.

Serbia has so far failed to honour its pledge, with some officials in the country claiming the deal signed last September was non-binding.

Soon after the deal was struck, the EU warned both Kosovo and Serbia that they could undermine their membership hopes by opening embassies to Jerusalem.

“There is no EU member state with an embassy in Jerusalem,” European Commission spokesman Peter Stano said. “Any diplomatic steps that could call into question the EU’s common position on Jerusalem are a matter of serious concern and regret.”

For Kosovo, however, boosting the number of countries that recognise it is currently more important than EU membership.

Serbia has for a number of years been carrying out a campaign to persuade countries to ‘de-recognise’ Kosovo.

Serbia’s campaign, where the country attempted and at times succeeded in persuading third countries to withdraw their recognition of Kosovo’s independence has been extremely controversial, and was partly the reason behind Kosovo’s introduction of 100 per cent import tariffs on Serbian goods in 2018. The tariffs were removed in April 2020.

Conversely, Kosovo’s attempts to join international organisations has always been frustrated by officials in Belgrade. Serbian leaders have long viewed any potential inclusion of Kosovo in organisations such as Interpol as strengthening the position of a country that it still considers to be one of its provinces.

Kosovo declared independence from Serbia in 2008, nine years after NATO conducted a 78-day airstrike campaign to stop a Serb crackdown against ethnic Albanians in Kosovo.

Most Western nations – including the US – have recognised Kosovo’s independence, but Serbia and its allies Russia and China, as well as five EU countries (Cyprus, Greece, Romania, Slovakia, Spain) have not.

According to Ms Haradinaj-Stublla, 117 countries now recognise Kosovo. Serbia suspended its de-recognition campaign in September last year as part of the Trump-sponsored deal.