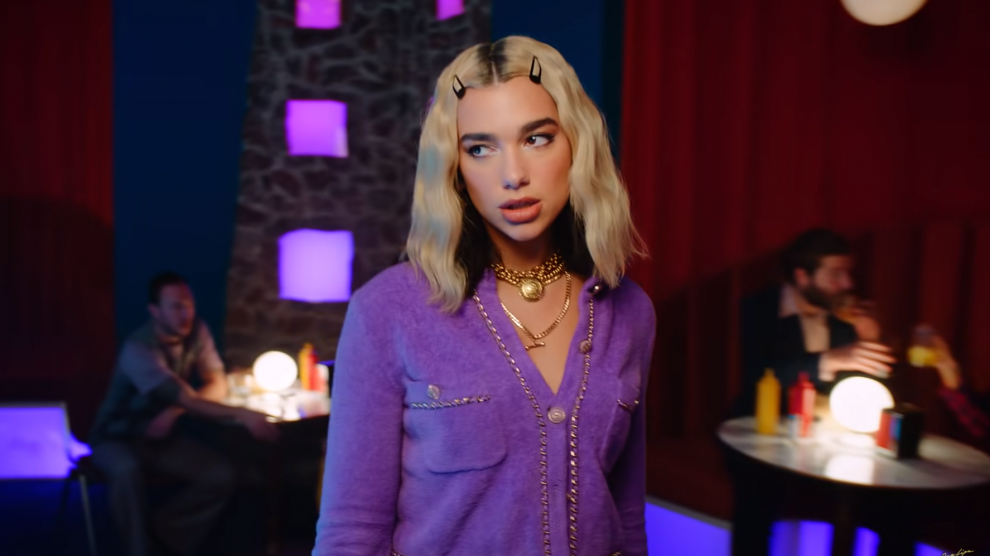 For those of us who claim to have “spotted her early”, 2020 was the year Kosovo’s finest and probably emerging Europe’s biggest ever pop star Dua Lipa gave us the opportunity to say “we told you so”.

When we look back on a year that most of us will probably want to forget, it’s worthwhile to keep in mind that for a select few, 2020 has been a very good year indeed. One somewhat controversial incident involving Albanian irredentism aside, the UK-born but proudly Kosovan pop sensation Dua Lipa is one of those lucky people.

Not that the year had a great start for Lipa: her much-anticipated sophomore album, Future Nostalgia, was leaked weeks before its scheduled release. The tears that accompanied an Instagram post explaining why the album needed to be hurried on to streaming platforms and music stores ahead of plan suggested that the leak was no marketing stunt.

Besides, Dua Lipa is by now so big that marketing stunts are superfluous.

Soundtrack of a summer that never happened

Global superstardom for Lipa has been as sure a bet as Tesla shares ever since Be the one became one of Europe’s biggest songs of 2015. Carefully-chosen collaborations with the likes of Martin Garrix, Sean Paul and Calvin Harris helped, and although a self-titled debut album that felt more like a collection of singles than a cohesive whole flattered to deceive, there was enough to reassure those of us who have long claimed to have “spotted her early” that she was unstoppable.

Future Nostalgia was when we were finally able to say “we told you so”: 11, beautifully-crafted and slickly-produced three minute bangers, all perfectly executed and set to become the soundtrack of the summer.

Except we never got a summer, not in the usual sense of the word. Nevertheless, Lipa still managed to reach the stratosphere.

Boasting more funk than is probably healthy it is as retro as roller discos and contains the highest ratio of dancefloor fillers of any album in recent memory, from the irresistible Hallucinate – the song of the year, an instant, timeless classic – to Levitating, which sounds like it came straight out of 1978.

Indeed, so good is Future Nostalgia (last month nominated for six Grammy awards) that Lipa managed to sell it twice. Kind of.

Using the tour hiatus offered by lockdown as productively as just about anyone except that ultimate workaholic Taylor Swift (who managed an entire new album), Lipa put together an A-list band of DJs – led by The Blessed Madonna – to come up with Club Future Nostalgia, which turns the album into a gloriously fun mixtape tailor-made for late-night parties.

It’s just a shame that late-night parties were outlawed in 2020.

Not that such inconveniences stopped Dua Lipa from inviting us all to a party at Studio 2054 (in fact, the multiroom club space and sound stage Printworks in London’s Docklands). Most music live streams this year have been rather sad affairs, which did little more than bring home the desperation of not being able to go clubbing or gigging. Studio 2054 – staged at the end of November – did the opposite: it crashed into our living rooms like a well-oiled party guest who has suddenly decided it’s time to start spraying everyone with champagne.

An ill-advised appearance from Elton John aside (whoever in the production meeting said What this hi-tempo club night mixtape concept needs is Elton John singing half of Rocket Man very slowly should have been dismissed on the spot) Lipa managed to pack what felt like one million hits into little more than an hour of TV. (Can we call it TV?).

It was chaotic, joyous, life-affirming and featured so many guests that we probably missed a few. Kylie Minogue duetted with Lipa on One Kiss and Electricity, FKA twigs offered us a masterclass in pole dancing, Angèle was on hand to sing Fever and The Blessed Madonna spun it all together from an elevated DJ desk.

It was nuts, and as un-2020 as you can get. It’s what the year needed, and five million people agreed, probably making Lipa more cash in one night than any global tour possibly ever could.

The 1970s and 1980s that Future Nostalgia, Club Future Nostalgia and Studio 2054 reference were awash with appallingly trashy TV spectaculars that tried to make spending Saturday night at home a fun, acceptable alternative to going out. It’s ironic that in the year we had to stay at home, Dua Lipa managed to do just that.

It’s therefore doubly ironic that it also made us want to get back on the dancefloor even more.