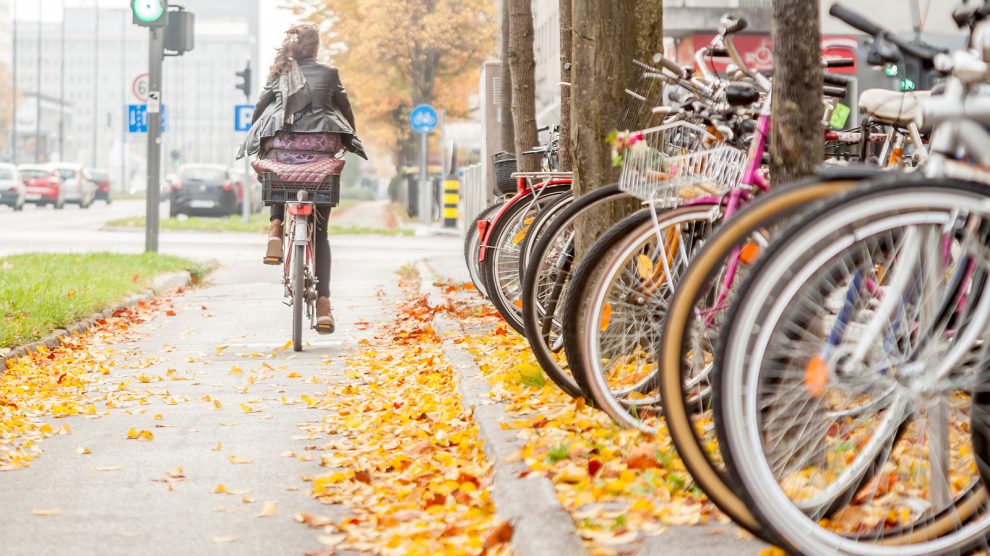 Cycling infrastructure in Central and Eastern Europe has hitherto not been as favourable for pedal power as it should be, but a few cities are now beginning to change that.

A key target of the European Green Deal, an EU plan first unveiled in December 2019 which aims to cut carbon emissions and achieve economic growth not tied to resource use, is the 55 per cent reduction of pollution caused by cars by 2030.

While most efforts will focus increasing the number of electric vehicles on the roads and implementing tougher environmental standards for traditional cars, cycling is also set to take a leading role.

In cities that can already boast decent cycling infrastructure, more and more people are choosing bicycles not merely as a means of recreation but as a form of daily transportation: one that has no carbon footprint.

Every two years, Copenhagenize Design, a consultancy firm that advises cities on how to improve their cycling infrastructure, publishes an index listing the twenty most cycling friendly cities in the world.

In news that will surprise few, Danish capital Copenhagen tops the list, followed by the Dutch cities of Amsterdam and Utrecht.

Worryingly, of all the cities in Central and Eastern Europe, just one – the Slovenian capital Ljubljana – makes the index, in 14th place.

According to Copenhagenize Design, Ljubljana is a small city with a cycling population of all ages and abilities, and bikes are a mainstream form of transport for many.

“The bicycle is taken seriously as an element important for healthy city development,” it says.

Grega Stopar of Slovenian cycling association Rajd says that Ljubljana’s officials underwent a shift in mindest a decade or so ago, when they embraced “modern ideas of how the city should look.”

“They closed the city centre to [motorised] traffic and put pedestrians and cyclists in the spotlight,” he says, adding that Ljubljana also boasts a bike sharing scheme he calls “cheap and friendly”.

He also adds that Slovenians are in general very keen on cycling. Slovenian Tadej Pogačar recently won his second Tour de France in a row, while compatriot Primož Roglič has now won the last three Tours of Spain, clinching his most recent victory just last weekend on September 5.

Even so, when it comes to cycling infrastructure, Stopar says Ljubljana could do better.

“There is a fairly good network inside the city, but we’re still missing wide and user-friendly bicycle paths that lead in and out of the city – to the suburban areas and beyond. And for sure, we’re missing better integration with other forms of public transport, especially buses and trains,” he tells Emerging Europe.

Despite the issues, which also include a lack of bicycle parking, Ljubljana is still well ahead of other cities in the emerging Europe region.

So what could they learn from Ljubljana?

“Remove cars from the streets and cyclists will appear in big numbers,” he says. “That, in my opinion, is the most important thing.”

While Ljubljana is the only city in the region to make the Copenhagenize index, others are beginning to embrace cycling. The Polish capital Warsaw is one, and now has around 530 kilometres of cycle paths.

“Warsaw has many roads for cyclists. You can safely cycle across the city by bike,” says Michał Ajzyk of the South Warsaw Cycling Club.

“This is necessary in order to reduce the amount of traffic jams in the city. Traffic is a serious discomfort in Warsaw, but it is a problem that can be fixed by making life easier for cyclists and encouraging people to change their mode of transport to a bicycle.”

The Czech capital Prague is also making an effort to become more attractive for cyclists. This year it made a record investment in new bike paths, spending 14.5 million euros to create 21 kilometres of trails, responding to a marked increase in cycling set off by the Covid-19 pandemic.

According to official data, across Czechia there were 38 per cent more cyclists on the roads in 2020 than in the previous year: some 1.23 million people.

In Hungary, Budapest also witnessed a major increase in the number of cyclists during the Covid-19 pandemic.

“Budapest is experiencing a cycling renaissance,” Áron Halász, vice president of the Hungarian Cyclists’ Club tells Emerging Europe. “As much as 70 per cent of the adult population would be open to cycling if the infrastructure became more attractive. Last year’s development of the cycle network proved this: we saw a six percentage point increase in those who at least occasionally ride a bike in Budapest.”

Halász adds that Budapest dealt with the increase of cyclists during the pandemic well.

“The city provided space for cycling and created missing network connections on main arteries in line with our proposals. But the improvements should continue year-by-year and cities should also be proactive in their communication, doing more to ‘sell the product’,” he explains.

Elsewhere in the region the life of a cyclist is less convenient, with local authorities often reluctant to spend money on cycling infrastructure.

But this is not, according to Anna Plyushteva, a departmental research lecturer in transport studies at Oxford University, simply a reflection of rich-poor divide.

“The landscape of cycling infrastructure and the prevalence of cycling in Central and Eastern European cities is very uneven,” she explains.

“While it is common to assume that the biggest cities in the region’s wealthiest countries are those where cycling is most prominent, the reality is more complicated. For example, in Bulgaria, the place which receives the most praise for its support of cycling is Burgas, a city seven times smaller than the capital Sofia.”

And, like Áron Halász, she says that “promoting behaviourial change” is as important as developing infrastructure.

There is not, at present, an official EU-level strategy on cycling, although the European Cycling Federation proposed one in 2017, in which it put forward plans to grow bicycle use throughout European Union by 50 per cent by 2030.

Plyushteva warns, however, that the way there may be politically unpopular.

“Experience shows that [the development of infrastructure and behaviour change] are not very effective without another crucial ingredient: the active discouragement of cars,” she tells Emerging Europe.

“Low-traffic areas, traffic-calming infrastructure, reduced car parking, and reduced speed limits – they are profoundly unpopular politically, but ultimately, these are the measures that are most effective for getting people on bikes.”