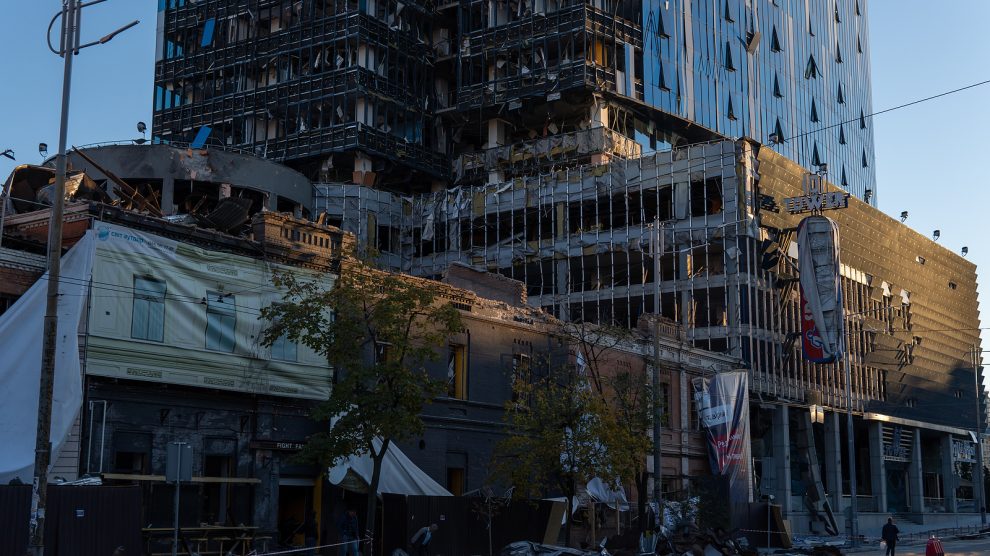 A bridge linking Ukraine’s Crimean peninsula with Russia was badly damaged in an explosion last Saturday. Russia, which illegally occupies the peninsula, blamed Ukraine for the attack, and on Wednesday arrested eight people as part of an investigation. Andriy Yusov, spokesperson for Ukraine’s interior ministry, dismissed the investigation as “nonsense”.

On Monday, at least 20 people were killed and scores more injured after Russia launched a massive wave of strikes targeting cities across Ukraine, including the capital Kyiv, which came under attack for the first time in several months. In response, Ukrainian President Volodymyr Zelensky said his country was “dealing with terrorists” and accused Russia of targeting power facilities and civilians following the missile attacks.

Russia has since continued to attack key civilian infrastructure in Ukraine with missile strikes, despite warnings from the UN and NATO countries that Moscow may be committing a war crime. On Tuesday, Ukrainian Energy Minister Herman Halushchenko said that 30 per cent of the country’s energy facilities had been damaged in the previous 48 hours. Halushchenko said that attacks were “the biggest of the war” and carried out “on the entire chain in order to make switching supply as difficult as possible.”

While underlining that the energy system was “still stable”, he confirmed that Ukraine would halt the export of energy, and joined calls for Kyiv’s Western allies to provide “air protection systems which really could help us to protect our infrastructure”.

US President Joe Biden said this week that Vladimir Putin had completely misjudged Russia’s capacity to invade Ukraine, but added he did not believe Moscow would use a tactical nuclear weapon against its neighbour despite recent thinly veiled threats to employ his atomic arsenal.

On Thursday, Germany’s chancellor Olaf Scholz said that the war in Ukraine was part of a broader movement against the West by Russia. He said, “Vladimir Putin and his enablers have made one thing very clear: this war is not only about Ukraine. They consider their war against Ukraine to be part of a larger crusade, a crusade against liberal democracy.”

Serbian President Aleksandar Vučić claimed last weekend that France and Germany have encouraged Serbia to allow its former province Kosovo to join international institutions and organisations, including the United Nations, in exchange for early membership in the European Union. He quickly added that such a solution was unacceptable to Belgrade and contravened Serbia’s constitution. Neither Paris nor Berlin has confirmed the offer of any such quid pro quo deal.

In a speech to the Council of Europe in Strasbourg on Wednesday, Albanian premier Edi Rama said that Swiss senator Dick Marty’s 2011 report for the Council of Europe, which made war crimes allegations against Kosovo Liberation Army officers, should be reviewed as “an issue of truth and justice”. Rama said the report’s suggestion raised false suspicions that human organs were trafficked by senior KLA figures, and that the subsequent indictments of former KLA officers confirm that the claims were untrue. “There is not a single word that clearly or implicitly mentions the issue of human organ-trafficking,” he said.

The European Commission this week recommended that Bosnia and Herzegovina be granted the official status of candidate country to join the European Union, on the understanding that a series of reforms will be carried out in key areas. These include reinforcing democracy, ensuring the functionality of state institutions, upholding the rule of law, fighting corruption and organised crime, guaranteeing media freedom and managing migration. The Commission also this week repeated its assertion, first made in 2018, that Kosovo has fulfilled all benchmarks required for visa liberalisation.

Hungary may seek to join the euro’s ERM-2 waiting room this year or next, its finance minister said this week, as officials scramble to find ways to arrest the plunging currency as it wreaks havoc across the economy. Finance Minister Mihaly Varga said the government could consider trying to join the exchange-rate mechanism, which locks a country’s currency into a fixed range against the euro before adopting the single currency, if and when it manages to reach a potential year-end deal to unblock European Union funding.

Poland’s minister for ties with the European Union resigned on Wednesday, saying it was in agreement with the prime minister, amid the government’s fractious relationship with the bloc and domestic tensions. Konrad Szymański’s departure was interpreted as a weakening of the team of Prime Minister Mateusz Morawiecki at a time of rising tensions inside the government over the energy crisis and ways of countering inflation and the rising costs of living.

France’s President Emmanuel Macron accused Russia on Wednesday of purposefully provoking the recent clashes between Armenia and Azerbaijan as part of an effort destabilise the Caucasus region and beyond. The worst fighting between the two ex-Soviet countries since 2020 broke out in late September, killing more than 200 people. Moscow, which has a defence pact with Armenia and a military base there, deployed thousands of peacekeepers to the region after a ceasefire in 2020.

Slovakia’s prime minister, Eduard Heger, condemned a shooting that killed two people outside a gay bar in the capital Bratislava, saying on Thursday that extremism had no place in the country. A gunman killed two people and wounded another near the bar in the city centre late on Wednesday. Police said they found the suspected attacker dead on Thursday morning. Officers have not released any details on the suspected motive. Slovak media reported the main suspect had posted messages with the phrases “hate crime” and “gay bar” hashtagged on Twitter.

The planned initial public offering of Romanian state-owned hydropower producer Hidroelectrica may be smaller than initially projected and won’t happen until March or April next year, shareholder Fondul Proprietatea said on Tuesday. Fondul, the company’s sole minority shareholder, had previously set November 15 as the target date for launching the listing. Fondul was set up as a fund to compensate Romanians for assets seized under communism and holds minority stakes in a string of state firms, including 20 per cent of Hidroelectrica.