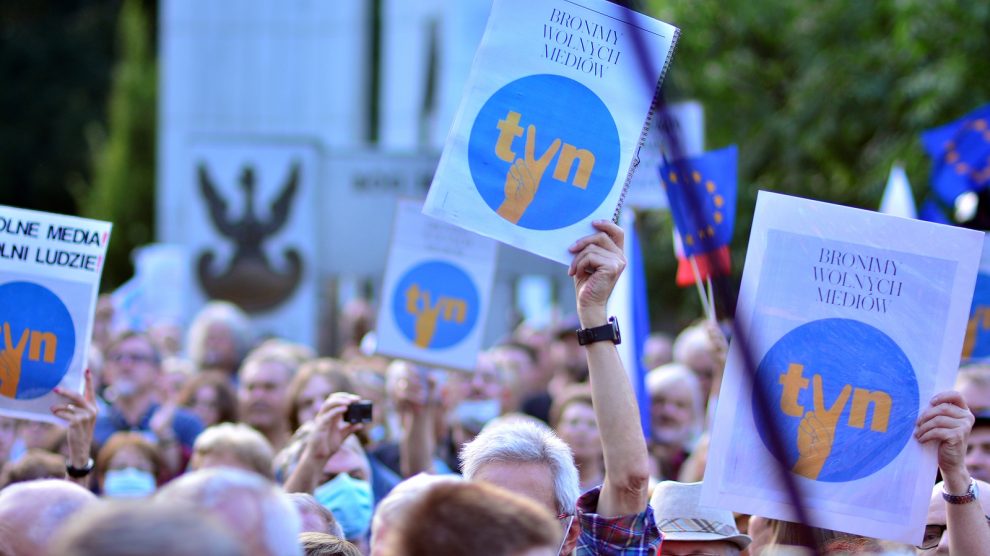 A bill, dubbed Lex TVN, which threatens the largest ever US investment in Poland, has passed through the the lower house of Poland’s parliament, but still has some way to go before it becomes law.

The lower chamber of Poland’s parliament narrowly voted 228 to 216 late on August 11 to approve a controversial media bill that risks undermining the country’s relationship with the United States and further antagonising the European Union.

While Poland’s ruling Law and Justice party (PiS) has said that the law – which prevents companies from outside the European Economic Area holding more than a 49 per cent stake in Polish radio and television stations – will protect all broadcasters from takeovers by companies based in hostile foreign powers such as China and Russia, opponents say it is an attempt to push US company Discovery to sell the country’s biggest TV network, TVN, whose news channel TVN 24 is often critical of the PiS-led government.

The law has even been dubbed “Lex TVN” by opposition lawmakers, who say that the new rules would see TVN lose its broadcast licenses.

“We do not have any intentions regarding a specific TV channel, it is just about tightening the regulations, so that there is no situation in which companies from outside the European Union would buy media in Poland,” Prime Minister Mateusz Morawiecki told a news conference on August 12.

Last week, a bipartisan group of US senators warned the Polish government against the adoption of the law, saying that it threatens “a major US investor in the country”, without mentioning Discovery by name.

They were joined late on August 11 by US Secretary of State Antony Blinken who declared that Washington was “deeply troubled” by passage of the bill.

“Large US commercial investments in Poland tie our prosperity together and enhance our collective security,” said Blinken in a statement. “This draft legislation threatens media freedom and could undermine Poland’s strong investment climate.”

Discovery – the largest US investor in Poland – called the bill “an attack on core democratic principles of freedom of speech, the independence of the media and is directly discriminatory against TVN and Discovery”.

TVN’s own management board warned that “the outcome of the vote should be of great concern to any enterprise investing in Poland”.

The law is also deeply unpopular with many Poles, and thousands of people demonstrated against in cities across the country on August 10.

Passage of the bill on August 11 was itself highly controversial.

Parliament was initially adjourned until September following a motion submitted, and won, by the opposition.

After consultation between PiS leaders and unnamed constitutional experts however, the result was then annulled by parliament’s speaker Elżbieta Witek who ordered another vote on the motion, subsequently won after three Kukiz’15 party MPs – who claimed they had mistakenly voted in favour of the adjournment first time round – switched sides.

The speaker then chose to ignore the earlier vote the government had lost.

The bill will now go to the Senate, the upper house of parliament, which is controlled by Poland’s opposition.

It is therefore likely to be rejected and returned to the lower house, where it will need an absolute majority – half of all MPs must vote for it – before it can be sent to President Andrzej Duda for promulgation.

PiS will again need the support of Kukiz’15, having earlier this week decided to fire Deputy Prime Minister Jarosław Gowin, the leader of Agreement, one of its two junior coalition partners.

Gowin has for some time been increasingly at odds with PiS, and is opposed to Lex TVN as well as the government’s flagship economic package, the Polish Deal.

Without Gowin’s 13 MPs, PiS has lost its wafer-thin parliamentary majority, which stood at 235 out of 460 seats. Kukiz’15 has just four seats, meaning that final passage of the bill is by no means certain.

Although it received far less media attention, Poland’s parliament also on August 11 passed legislation that would put an end to most legal claims for properties confiscated at the end of World War II.

The new law states that administrative decisions can no longer be challenged in court after the expiration of a 30-year period — essentially preventing Holocaust survivors from recovering property seized by Poland’s communist-era authorities.

Israel and the US are now in the process of formulating a joint response to the legislation.

Immediately after the leglisation was passed, however, Blinken jumped the gun and called for a comprehensive law for resolving confiscated property claims, to provide some measure of justice for victims.

“Such a law would benefit many Polish citizens, as well as people who were forced to leave Poland during and after World War II and who subsequently became naturalised citizens of other countries,” he said.

“Until such a law is enacted, the pathway to compensation should not be closed for new claims or those pending decisions in administrative courts.”

Mickey Levy meanwhile, the speaker of Israel’s parliament, the Knesset, described the law as “daylight robbery that desecrates the memory of the Holocaust.”

“Poland’s decision to pass this immoral law harms the friendship and bilateral relations between Israel and Poland,” he said in a statement.

Belarus is weaponising migration, but Lithuania is failing to meet its humanitarian obligations
A law to ban genocide denial plunges Bosnia and Herzegovina into yet another crisis
Comment