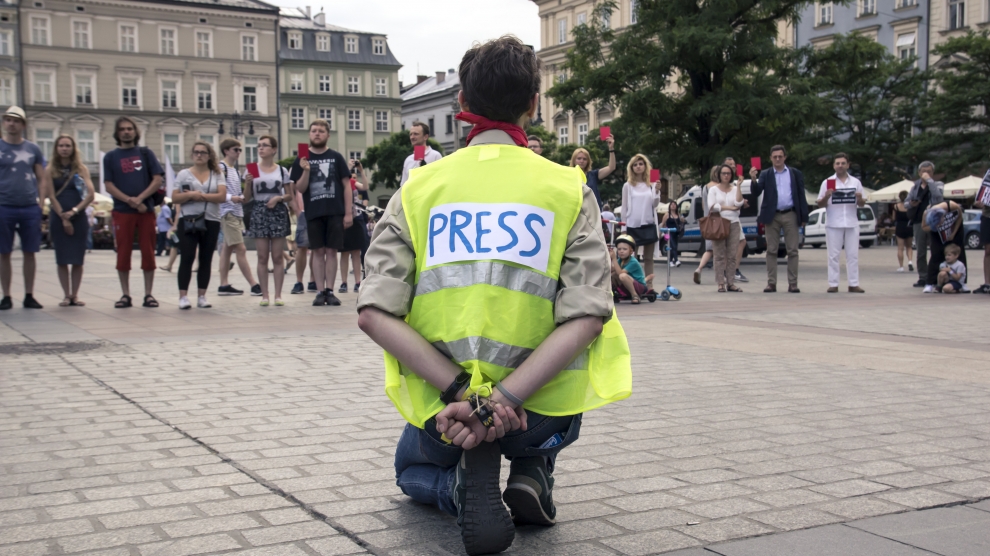 Media freedom in Europe is on the decline, according to the European Parliament.

The European Parliament this week expressed its “deeply concern” about the state of media freedom within the EU and denounced the violence, harassment and pressure faced by journalists.

In a resolution adopted on November 25, Parliament points to “attempts by governments of some member states to silence critical and independent media and undermine media freedom and pluralism”. MEPs are particularly concerned about the state of public service media in some EU countries, where they have become an “example of pro-government propaganda”.

They stress that media freedom, pluralism, independence, and the safety of journalists are crucial components of the right to freedom of expression and information, and are essential to the democratic functioning of the EU. “Freedom of the media has been deteriorating in recent years”, MEPs warned, adding that the Covid-19 outbreak has exacerbated this deterioration.

MEPs see a “growing pattern of intimidation aimed at silencing journalists”, citing the murders of Daphne Caruana Galizia in Malta and Ján Kuciak and his fiancée in Slovakia as examples of the risks faced by investigative journalists. They call on public figures to refrain from denigrating journalists, and insist on the legal obligation to investigate all attacks, highlighting that female journalists are especially vulnerable and should be given additional protection.

Parliament’s resolution notes that when media ownership is concentrated in the hands of too few people, pluralism is put at risk, making it more difficult to challenge the spread of disinformation. MEPs are now demanding that EU countries take action to avoid excessive concentration and guarantee transparency. They criticise governments for invasive interference in public advertising, and make clear that EU funds must not be spent on government-controlled media or political propaganda.

In this respect, Parliament also called on the European Commission to assess in each member state how transparent the ownership of media outlets is, as well as private and government interference in the sector, in its annual rule of law assessment. MEPs insist that attempts to damage media freedom and pluralism should be considered a serious and systematic abuse of power that goes against fundamental EU values.

“Today we witness democracy being withdrawn, power taken with lies. There is no freedom without media independence, no democracy without media pluralism. Media should serve the truth, not lies. It should serve voters, not those in power, and should be a check on power. Media should protect democracy, but media can also kill it. That is why it must be independent,” said Polish MEP Magdalena Adamowicz.

Adamowicz is a lawyer and the widow of Paweł Adamowicz, a former mayor of Gdańsk murdered by a mentally unstable ex-convict in 2019.

MEPs want a more robust legal framework to prevent and combat increasing online hate speech and call for more collaboration between online platforms and law enforcement authorities. They stressed that platforms’ voluntary actions are “necessary yet still insufficient” in tackling disinformation, illegal content and foreign interference. Nonetheless, they “must not become private censors” and the removal of illegal content must be subject to safeguards.

The resolution also highlights concerns about foreign democratic interference seeking to polarise and nullify pluralism and warns of the potentially harmful consequences of manipulating information relating to the Covid-19 pandemic.

In Hungary meanwhile, access to information is more and more difficult for independent journalists, says RSF. They are banned from freely asking politicians questions in parliament. Government politicians do not give interviews to government-critical media outlets, while press departments of public institutions typically do not reply to the questions of independent media.

Poland and Hungary last week vetoed the European Union’s historic 1.8 trillion euros budget and coronavirus recovery plan over attempts to link funding to respect for the rule of law.

Darkness you can dance to: Elsewhere in emerging Europe
Emerging Europe is failing to protect citizens from air pollution
Comment