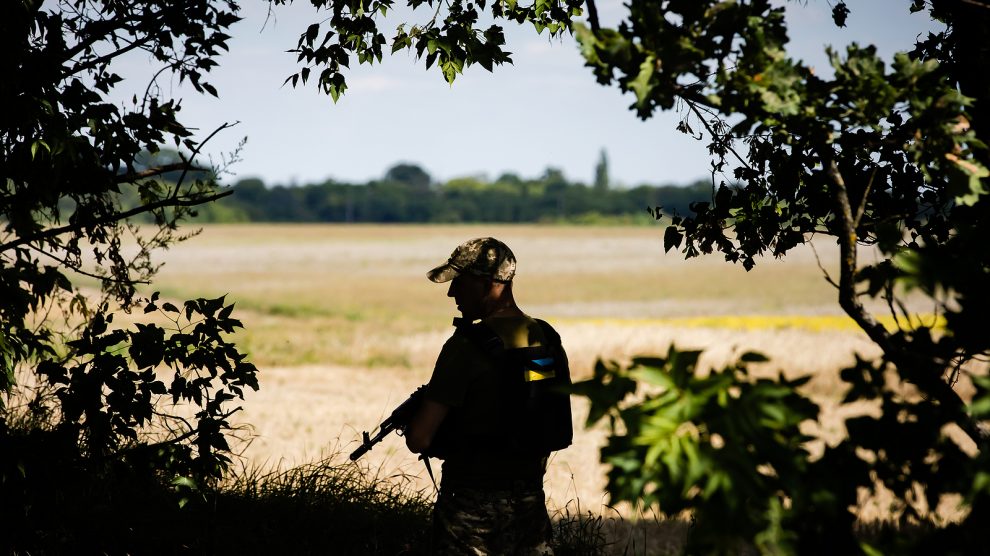 Ukraine this week recaptured up to 1,000 square kilometres of territory in the eastern region of Kharkiv in a surprise counter-offensive, liberating more than 20 settlements.

The operation is thought to have been made possible after Russia was forced to refocus its forces to the south to counter Ukrainian offensives in Kherson.

Some reports suggest Ukrainian forces may be just a few kilometres from the city of Izyum, an important link in Russia’s military supply chain.

Hailing the counter-offensive in a TV address on Thursday, President Volodymyr Zelensky said that “each success of our military in one direction or another changes the general situation along the entire frontline in favour of Ukraine”.

The United States on Thursday approved additional military aid to Ukraine worth up to 675 million US dollars. The announcement came at a meeting of defence ministers and military chiefs from more than 40 countries at the Ramstein airbase in Germany.

In remarks opening the talks, Defence Secretary Lloyd Austin said the US and its allies were “seeing the demonstrable success of our common efforts on the battlefield”.

He added that the latest package of aid would include howitzers, artillery munitions, Humvees, armored ambulances, anti-tank systems, and more.

The Biden administration also on Thursday announced two billion US dollars in long-term assistance in the form of investments to bolster the security Ukraine’s neighbours, including both NATO members and non-members at risk of future Russian aggression.

The announcement coincided with a visit to Kyiv by US Secretary of State Anthony Blinken.

“President Biden has been clear we will support the people of Ukraine for as long as it takes. I reiterated this message to President Zelensky and his team today in Kyiv, which remains – and will remain – the capital of a sovereign, independent Ukraine,” Blinken said in a statement.

The secretary general of the United Nations, António Guterres, this week called for the creation of a demilitarised zone around Ukraine’s Zaporizhzhia nuclear power plant, which would involve the withdrawal of Russian occupying troops and the agreement of Ukrainian forces not to move in.

Zaporizhzhia is Europe’s largest nuclear plant – it is home to six of Ukraine’s 15 nuclear reactors – and has come under repeated shelling in recent weeks, sparking fears of a potential nuclear disaster. Russia and Ukraine have accused each other for being responsible for the shelling.

Just two of Zaporizhzhia’s six reactors have been operating since the war began and just one reactor has been working in recent days.

“Together with Latvia, Lithuania and Poland, we want to significantly limit the entry of Russian citizens whose goal is tourism,” said Kallas.

Minister of Foreign Affairs Urmas Reinsalu told Russians that they should not come travel to Estonia. “You are not welcome here,” he said.

Slovakia’s political crisis deepened this week after a junior partner completed its withdrawal from the governing four-party coalition, leaving Prime Minister Eduard Heger without a parliamentary majority. Foreign Minister Ivan Korcok, Justice Minister Maria Kolikova and Education Minister Branislav Gröhling, all from the liberal Freedom and Solidarity party, submitted their resignations on Monday. They followed the example of the party leader and former Economy Minister Richard Sulik, who resigned from his government post last week.

Hungary aims to cut gas consumption by 25 per cent this heating season at public institutions and companies except for hospitals and social institutions due to surging energy costs, Prime Minister Viktor Orbán’s chief of staff, Gergely Gulyás, said on Thursday. Gulyás also urged consumers to use gas and electricity sparingly, adding that the government would regulate firewood prices to ensure households have access to the fuel at affordable prices ahead of the heating season.

In Czech meanwhile gas storage has continued to be filled since Russia shut its Nord Stream 1 pipeline, Industry Minister Jozef Sikela said on Thursday, adding that storage had reached 85 per cent of capacity. Europe’s energy crisis grew more acute this week after Russia halted gas supplied via the Nord Stream 1 pipeline, while President Vladimir Putin threatened to cut all supplies if Europe imposed a price cap on Russian oil and gas.

Albania has ordered Iranian officials out of the country and severed diplomatic relations with Tehran following an investigation into a cyberattack that it concluded was Iranian “state aggression” when it hit the Adriatic coast nation in July. On Wednesday, Prime Minister Edi Rama announced the expulsion of all Iranian diplomats and embassy staff and gave them 24 hours to leave. Rama’s official website said there was “irrefutable” evidence that Tehran had backed “the act of a serious cyberattack against the digital infrastructure of the government of the Republic of Albania.”

Serbian Prime Minister Ana Brnabić travelled to northern Kosovo on Monday, the first trip by a senior official from Belgrade to the former breakaway province in years. The visit came just over a week after Serbia and Kosovo signed a landmark arrangement that will allow for the free movement of their citizens between the long-time rivals’ territories. The deal followed weeks of negotiations in Brussels after northern Kosovo was rocked by unrest with Serb protesters blocking border crossings and firing at police over a plan by Kosovo authorities to introduce a new set of travel documents for people entering the territory with Serbian IDs.

Romanian discount carrier Blue Air on Tuesday canceled all flights until at least September 12 after its bank accounts were frozen by the state amid concerns over unpaid debt. The sudden intervention left Blue Air unable to pay daily operating costs, the carrier said, with the grounding leaving thousands of passengers stranded at airports across Europe and beyond. The government said the halt to services was unjustified and urged the company to discuss a rescheduling of the debt.

Moldova on Tuesday extended until the end of September the environmental standards certificate for the Soviet-era Ribnita Metallurgical Plant in the breakaway region of Transnistria. The certificate allows the plant, which is the main source of revenue for the Transnistrian separatist government, to continue operating and to sell its products to European markets. It certifies that the plant meets waste management and pollution emission standards. The extension came after pressure from the separatist government and from Moscow, which props up Transnistria economically.

Members of Azerbaijan’s parliament have submitted a new law that would make it virtually impossible to form new parties, and further restrict the parties that do exist. The draft law would require new parties to have at least 200 founding members who each have lived in Azerbaijan uninterruptedly for the past 20 years. Other new restrictions would affect already existing parties: Parties that don’t participate in two elections in a row – whether they be presidential, parliamentary, or local – would be closed down. Some of the most prominent opposition parties have boycotted recent elections.