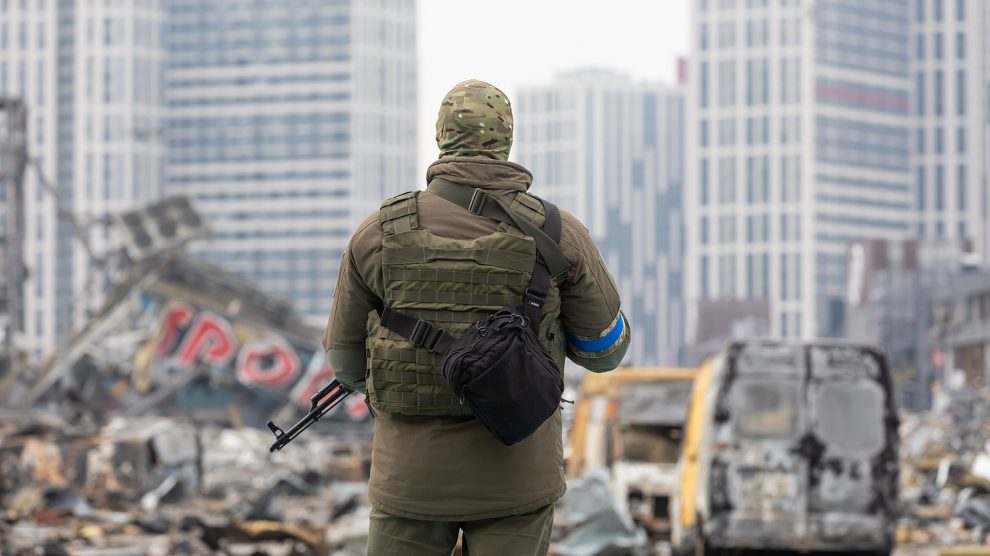 Ukrainian forces this week liberated the Kyiv region from Russian troops as officials warned that the departing soldiers were creating a “catastrophic” situation for civilians by leaving behind mines. The Russian retreat has also revealed evidence of war crimes, particularly in the Kyiv suburb of Bucha.

Ukrainian activists on Wednesday claimed to have identified the so-called “Butcher of Bucha”, a decorated Russian commander leading the unit that massacred hundreds of civilians in what is being widely condemned as genocide. Lt. Col. Azatbek Omurbekov, thought to be around 40, was first identified by InformNapalm, a Ukrainian volunteer group that monitors Russia’s military and special services.

The harrowing scenes of bodies littering Bucha that have emerged over the past few days have sparked the greatest condemnation in more than a month of war, with several Western leaders joining Ukrainian President Volodymyr Zelensky in calling it genocide.

Zelensky fought back tears as he toured the Kyiv suburb on Monday, and highlighted it during a powerful speech to the United Nations Security Council on Tuesday, accusing Russia of committing “the most terrible war crimes” since World War II.

Pope Francis was among those who this week condemned what he called “the massacre of Bucha” and held up a Ukrainian flag sent from the town at his weekly audience in the Vatican’s auditorium. He described the war on Ukraine as “cruelty that is increasingly horrendous”.

New sanctions against Russia were announced this week, but Zelensky said the latest package is “not enough” and that without more painful measures and supply of weapons, Russia will view the actions as permission to launch a new bloody attack.

“New investments in Russia are blocked, restrictions are applied against several systemic banks in Russia, personal sanctions are added, as well as other restrictions. This package has a spectacular look. But this is not enough,” said Zelensky on Thursday.

Speaking at NATO headquarters ahead of a meeting of NATO foreign ministers, Kuleba said there are three items on his agenda: “Weapons, weapons and weapons”.

The Ukrainian foreign minister said there is no distinction between offensive and defensive weapons – any weapons, including tanks and fast jets, would be used to defend Ukraine.

On Thursday afternoon, the mayor of Dnipro, a city in central-eastern Ukraine, urged women, children and the elderly to leave because fighting with Russia is expected to intensify in eastern regions.

The mayor, Borys Filatov, said in an online video address: “All those who have the ability should leave.”

The European Commission on Tuesday launched the bloc’s new rule-of-law disciplinary procedure for the first time against Hungary, two days after Viktor Orbán won a fourth landslide victory in parliamentary elections. Ursula von der Leyen, the commission president, said that Budapest had been informed of the decision and “we will now send the letter of formal notification to start the conditionality mechanism”. The untested mechanism, designed to prevent EU funds from being misused by countries backsliding on the rule of law, could ultimately deprive Budapest of more than 40 billion euros of EU payments.

Serbian President Aleksandar Vučić was elected for a second term in an election on April 3, taking 58 per cent of the vote. His nearest challenger Zdravko Ponoš mustered only 18 per cent. However, the Serbian Progressive party (SNS), led by Vučić, lost its majority in both the National Assembly of Serbia and the capital of Belgrade and will be forced to enter into coalitions with smaller parties. It will remain the largest party in parliament, with about 120 seats, but without an overall majority (126) for the first time since 2014.

Armenia and Azerbaijan on Wednesday agreed to peace talks to address tensions over the long-disputed territory of Nagorno-Karabakh, which borders both nations, the office of Armenian Prime Minister Nikol Pashinyan said. The European Union, which hosted the meeting between the two former Soviet states, said it hoped the discussions would serve as the first step in a durable peace. It was the third meeting in six months between Pashinyan and Azerbaijani President Ilham Aliyev after a conflict in 2020 in which Azerbaijan recaptured territory in and around the enclave that the Armenians had held for decades.

Poland has arrested two citizens of Belarus on charges of spying for Minsk, which could carry a 10-year prison sentence if they are found guilty, a regional prosecutor’s office said on Wednesday. Tensions have been running high between the neighbours over a migrant crisis that the European Union and Poland say was engineered by Belarus, a charge Minsk denies. The EU also accuses Minsk of supporting Russia’s invasion of Ukraine. “…the suspects heard charges of espionage on behalf of the Belarus intelligence services,” a regional prosecutor’s office in Poznan, west Poland, said in a statement.

Romania’s highest court on Thursday sentenced former tourism minister Elena Udrea to six years in prison for corruption. The High Court for Cassation and Justice upheld a 2018 lower court ruling for Udrea, a former presidential candidate and one of Romania’s most powerful politicians of her time with close ties to former president, Traian Basescu. She was convicted on charges of bribery and abuse of office. She was ordered to pay more than eight million lei (1.623 million euros) in damages. The tourism ministry was ordered to pay 900,000 euros to two witnesses.

Nord Security, the company behind NordVPN, said on Thursday it has raised 100 million US dollars in its first external investment round from Novator Ventures, Burda Principal Investments and General Catalyst at a valuation of 1.6 billion US dollars. Chief Executives of video game maker Supercell, food delivery firm Wolt and web developer Automattic also joined the funding round, which made NordVPN the second tech unicorn in Lithuania. Founded in 2012 by Tom Okman and Eimantas Sabaliauskas, Nord Security plans to use the new funds to hire more staff, invest in research and expand its product suite.

Kyrgyzstan’s government has struck a deal with a Canadian investor to end a years-long dispute over the huge Kumtor gold mine, thereby completing nationalisation of an asset that accounts for around one-tenth of the country’s economy. Under the agreement announced by President Sadyr Japarov on April 4, state-owned gold miner Kyrgyzaltyn will assume full ownership of the mine, which the government seized in May. In exchange for its 100 per cent stakes in the Kumtor Gold Company and the Kumtor Operating Company, Kyrgyzaltyn will cede its 26 per cent stake in Centerra Gold, the Canadian parent company. The latter’s shareholders have yet to approve the deal.