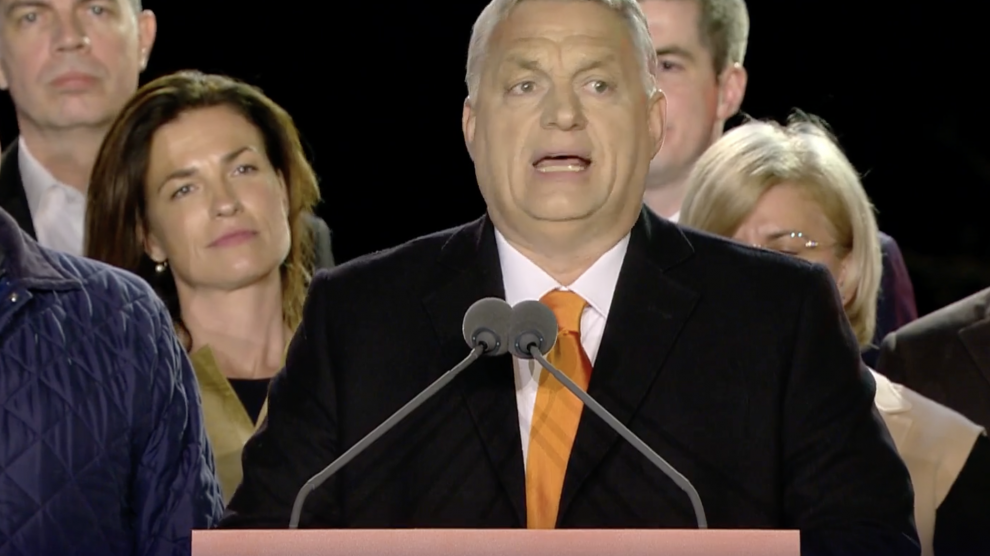 Hungarian Prime Minister Viktor Orbán comfortably won a new term in office in a parliamentary election on April 3, and used his victory address to take a swipe at his latest “enemy”: Ukrainian President Volodymyr Zelensky.

In the end it wasn’t even close. Hungarian Prime Minister Viktor Orbán on April 3 easily secured a fourth consecutive election victory, his Fidesz party taking well over 50 per cent of the popular vote and more than two-thirds of the seats in parliament.

As with the previous two parliamentary elections, the size of Orbán’s majority will allow him to make further constitutional changes, entrenching his and his party’s grip on power. As one leading figure in Hungary’s united opposition movement put it as the scale of the victory became apparent, “when Orbán does leave office, it will not be because he has lost an election”.

It was all meant to be very different. When six opposition parties came together in 2019 to form a single bloc they did so in order to counter Hungary’s first-past-the-post electoral system, which favours the largest party.

Already the knives are out for the opposition’s prime ministerial candidate, Péter Márki-Zay, who admitted to being “devasted” by the result.

“I don’t want to hide my disappointment and my sadness. We never expected this,” he said. Márki-Zay even lost in the constituency of Hódmezővásárhely, the small town of which is mayor. Indeed, Fidesz took 88 of 106 first-past-the-post districts, and a total of 135 seats overall in Hungary’s 199-seat parliament. Only in the liberal capital Budapest did the opposition win.

“Our day was not today, but it will come,” said Katalin Cseh, an MEP for one of the six opposition parties, Momentum. But it remains to be seen if the unlikely coalition, which includes the formerly far-right Jobbik party alongside the Socialists and the progressive Momentum, can stay together for another four years.

This is a problem for the future. In the present, Hungary’s ability to use it veto to block tougher EU sanctions against Russia is likely to be the biggest issue.

Not a complete triumph

On the same day that much of the world was taking on board the scale and brutality of Russia’s war crimes in Ukraine, now being uncovered in areas around Kyiv as Russia’s defeated army retreats, Orbán instead chose to taunt Ukraine’s president, Volodymyr Zelensky, listing him alongside traditional foes such as the EU and George Soros.

“This is a victory over the left at home, the international left, the bureaucrats in Brussels, the money of the Soros empire, the international media and even the Ukrainian president,” said Orbán, signalling that his stance on Ukraine is unlikely to soften.

Orbán has so far refused to allow the supply of weapons to Ukraine or even permit military aid to pass through Hungarian territory, angering NATO allies and Zelensky, who has called the Hungarian prime minister “[Vladimir] Putin’s only European supporter”.

It was not a day of total victory for Orbán, however. Concurrently with the parliamentary election, Hungarians were also asked to vote in a referendum on legislation that limits the teaching in schools of issues such as LGBT+ rights and gender equality.

To be legally binding, the referendum needed the backing of more than 50 per cent of the electorate. It fell well short.