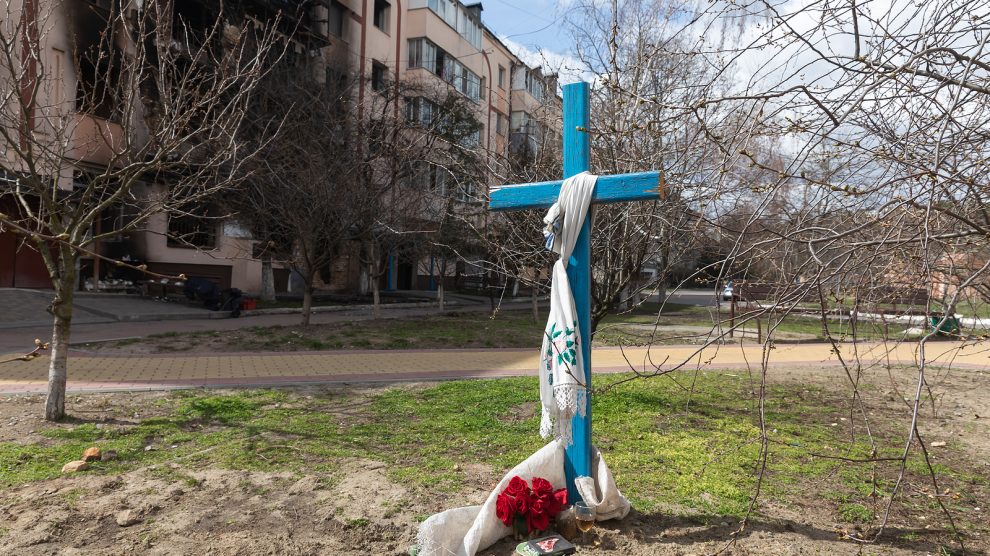 Vladimir Putin understands only the language of power. This means that sanctions against Russia should be strengthened, and military aid to Ukraine should be increased.

Dishonest and inhuman villains are heroes. This phrase, in the style of George Orwell, accurately describes what is happening in Russia. Vladimir Putin awarded the honorary title of “Guards” to the 64th Separate Motorised Rifle Brigade and the 155th Marine Brigade, which committed atrocities in Bucha, Ukraine.

The Kremlin dictator demonstratively, by his decree, rewarded these Russian soldiers “for mass heroism and courage, resilience and bravery.”

They killed more than 400 civilians. They raped 25 local women and children between the ages of 14 and 24, nine of whom became pregnant. They raped an 11-year-old boy in front of his mother.

And after that they are heroes? According to Putin, yes.

These armed forces failed in their Kyiv offensive and shamefully retreated to Belarus. Moreover, fleeing the Kyiv region, they stole washing machines, juicers, underwear, and shoes from homes. Are these the elite and most capable troops of the so-called “second army of the world”?

Spitting in the face of the civilised world

Putin could reward any other military unit. For example, those who managed to capture Kherson or Izium. But he deliberately, officially, awarded those who committed war crimes in Bucha. In this way, the bloody dictator demonstrates that the Kremlin does not care about moral norms and humanity. He laughs defiantly at international law and the rules of war. After all, he spits in the face of the civilised world.

It is not the first time Putin has rewarded those who carry out his criminal orders. For example, on February 27, 2020, on the fifth anniversary of the murder of opposition leader Boris Nemtsov, the dictator awarded a medal of the order “for merit to the fatherland” to Chechen Senator Suleiman Geremeyev. This senator is Ruslan Geremeev’s uncle, who was wanted on suspicion of organising Nemtsov’s murder.

But this time it is not just about rewarding, but also promoting and encouraging cruelty. Russia sees the killing of peaceful Ukrainians as a feat the Kremlin is ready to thank. Russia’s top leadership is sending a clear signal to the army that the more brutal the atrocities, the higher the reward.

Putin wants to continue to enjoy the barbaric actions of his army against Ukrainians. He enjoys the physical extermination of Ukrainians and rewards the most diligent participants in the genocide.

Putin is an antonym for the word mercy. The Putin archetype is like Prince Andrey Bogolyubsky, who gathered an army about 1,000 years ago, marched on Kyiv, and organised looting, burning of residential neighbourhoods, and brutal murders of residents.

Therefore, Putin’s recent order not to storm the Azovstal plant in Mariupol is far from evidence of humanism. On the contrary, he wants to make hostages of Ukrainian defenders and civilians and use them as a trump card in negotiations with the West.

Democratic leaders, who are seeking to negotiate something with an inadequate butcher, need to rethink their actions. There is no point in continuing to play the role of “peacekeepers”. It is not worth spending time convincing Putin to end the war.

Putin understands only the language of power. This means that sanctions against Russia should be strengthened, and military aid to Ukraine should be increased.

And the demonstrative awarding of the “guard” title to the Bucha killers is Putin’s message to the West: “We have killed and will kill, and we don’t give a damn about any conversations. Now call me and persuade me to stop the war, and I will laugh at you.”

Olexiy Minakov is a political communications expert from Ukraine. He is a columnist for leading Ukrainian online media, including Radio Liberty, Ukrayinska Pravda, NV, and LIGA.net. Since 2019 he has worked as a communications manager at the Ministry of Digital Transformation of Ukraine. In addition, he worked as a chief consultant at the political system development department of the National Institute for Strategic Studies.