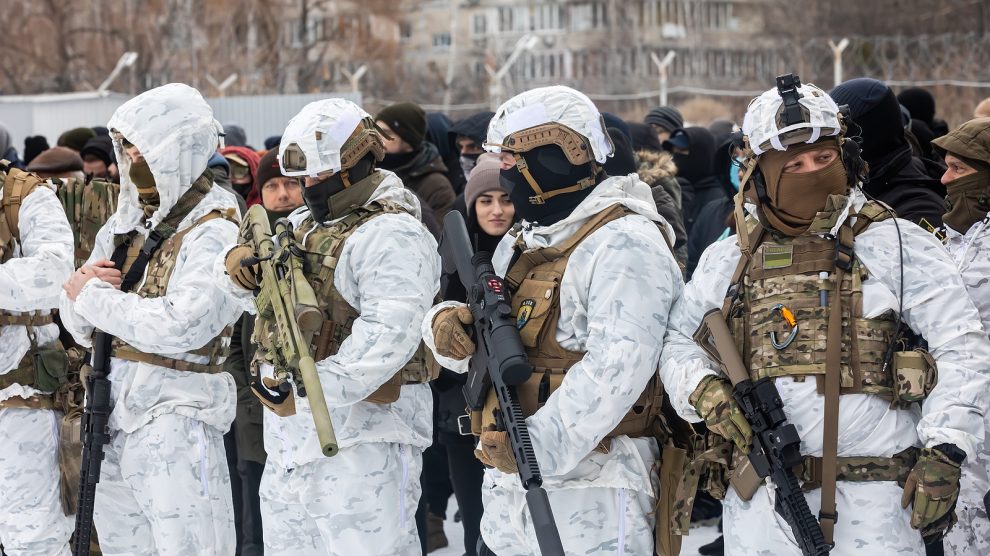 In 1994, Ukraine, Belarus, and Kazakhstan signed away their nuclear arsenals in exchange for security and sovereignty guarantees that increasingly appear to mean very little.

The situation near the Russo-Ukrainian border remains tense. Almost 150,000 Russian forces have amassed around eastern and southern Ukraine. Another 30,000 Russian troops are believed to be stationed in Belarus. Western politicians and leaders attempted to deescalate the situation by meeting with their Russian counterparts, but these diplomatic efforts were unsuccessful.

As the international community anxiously awaits Russia’s next move, many have wondered how this situation could have been avoided. Some have argued that Ukraine should have kept its nuclear arsenal as this would have given the Ukrainians leverage over Russia.

These same people have also pointed out that Russia and the West have failed to uphold Ukraine’s sovereignty. These critics are referring to the provisions outlined in the Budapest Memorandum: but what is this document, and how does it pertain to the current crisis?

Following the collapse of the Soviet Union in 1991, Ukraine inherited the world’s third-largest nuclear arsenal. Belarus and Kazakhstan were also left with nuclear weapons. The prospect of having three nuclear Eastern European states unsettled many international leaders, and as a result, the West pursued a nuclear non-proliferation agreement with them.

Representatives from Belarus, Kazakhstan, Ukraine, Russia, the United States, and the United Kingdom met in Budapest in December 1994 to discuss the Soviet Union’s nuclear arsenal. During the summit, the US, UK, and Russia welcomed Belarus, Kazakhstan, and Ukraine as parties of the Treaty on the Non-Proliferation of Nuclear Weapons.

They also stated that they would guarantee the sovereignty and territorial integrity of Belarus, Kazakhstan, and Ukraine. Finally, the US, UK, and Russia stated they would refrain from using force against these newly independent states.

In exchange, Belarus, Kazakhstan, and Ukraine would have to undergo a nuclear disarmament process and give up their nuclear weapons. These countries agreed, and the Budapest Memorandum was signed. China and France then provided their own security assurances to these Eastern European states.

But there were flaws with the document.

First, it did not list any enforcement mechanisms to ensure the sovereignty and territorial integrity of the three Eastern European states. Second, the security assurances were vague as they were not clearly identified in the memorandum. Third, the document was not legally binding. Finally, relinquishing nuclear weapons made Belarus, Kazakhstan, and Ukraine vulnerable to outside actors.

The Budapest Memorandum now appears to be a distant memory. Twenty years after the signing of the document, Russia launched a military incursion into eastern Ukraine. This operation resulted in the deaths of over 14,000 and the displacement of nearly two million Ukrainians. Russia also illegally annexed the Crimean peninsula.

Russia’s invasion was a direct violation of Ukraine’s sovereignty and territorial integrity. When the events unfolded in 2014, the US, UK, and France quickly stated that Russia had violated the Budapest Memorandum. The West then implemented sanctions on Russia. These penalties, however, have done little to alter Russia’s behaviour.

Belarus has also been a victim of Russian aggression. During the 2020 Belarusian elections, Alexander Lukashenko falsely claimed that he had been reelected. A highly developed opposition campaign emerged, and Lukashenko turned to Russian President Vladimir Putin for assistance. Russia set up a police force to help bolster Lukashenko, and many Russian journalists replaced Belarusian reporters in an attempt to spread misinformation.

Russia’s influence in Belarus has now surpassed security forces and the media. Lukashenko has frequently met with Putin to discuss matters in Belarus, and the Eastern European state is slowly being usurped by its neighbour. The Belarusian economy is heavily reliant on trade with Russia, and Lukashenko has constantly turned to Putin for assistance against the Belarusian protest movement.

Finally, Russia recently sent 30,000 troops to Belarus, and some experts fear this will be a permanent deployment.

While it is easy to criticise Russia for violating the provisions outlined in the Budapest Memorandum, the West has also struggled to uphold Ukraine’s sovereignty.

For example, while the US and UK have provided billions in financial assistance to Ukraine, neither country provided it with defence aid at the start of the conflict. It was not until the recent build-up around the Russo-Ukrainian border that they began to supply the Ukrainians with lethal assistance.

Meanwhile, the French have insisted that the West maintain its dialogue with the Russians, even though the recent summits ended in uncertainty.

Western sanctions have also failed to deter Russia’s aggressive behaviour. The Russian Federation has lost billions, but it has continued to violate the sovereignty and territorial integrity of Ukraine and Belarus.

The West is also struggling to develop innovative ways to deter the Russians. The international community has failed to reach a consensus on how it will punish Russia for its ongoing behaviour.

A Western failure to deter Russia will send a dangerous message to the international community.

First, China will be observing the situation in Eastern Europe with intent. If Russia launches a second invasion into Ukraine, and if the West cannot muster a robust response, then China may decide to act in Taiwan.

This could result in two major conflicts on opposite sides of the globe. With the continued impact of the coronavirus pandemic, and the difference in opinion on how the international community should respond to aggressive states, the West would surely be ill-prepared for such an event.

A second Russian invasion into Ukraine would also send a powerful message on nuclear non-proliferation. If Russia successfully launches a new incursion into Ukraine, then countries such as Iran and North Korea may pursue aggressive nuclear strategies.

These two states would argue that they are using nuclear options as an insurance policy to defend themselves. Their decisions, however, would only lead to greater instability in the Middle East and East Asia. In other words, tensions would only rise near Iran and North Korea, and this would make the world a more dangerous place.

Overall, the situations in eastern Ukraine and Belarus remain uncertain. Russia has violated the territorial integrity of its neighbours, and the West has struggled to defend the signatories of the Budapest Memorandum. But there is still time to act. If the West can implement greater sanctions against Russia, this would likely deter Putin and his inner circle. It will also demonstrate that the West is keen on defending its allies, and that it will do what is necessary to ensure the sovereignty of foreign states.

But if the West is unable to prevent a second conflict in Ukraine, and if Russia pursues this option without much consequence, then this will send a dangerous message to the international community. Therefore, the West must do everything it can to ensure that a greater conflict does not occur. The fate of the globe depends on it.

Informal economy and regional security: Africa and the EU must act
Forget the stereotypes: Ukraine is a country of digital innovation
Comment