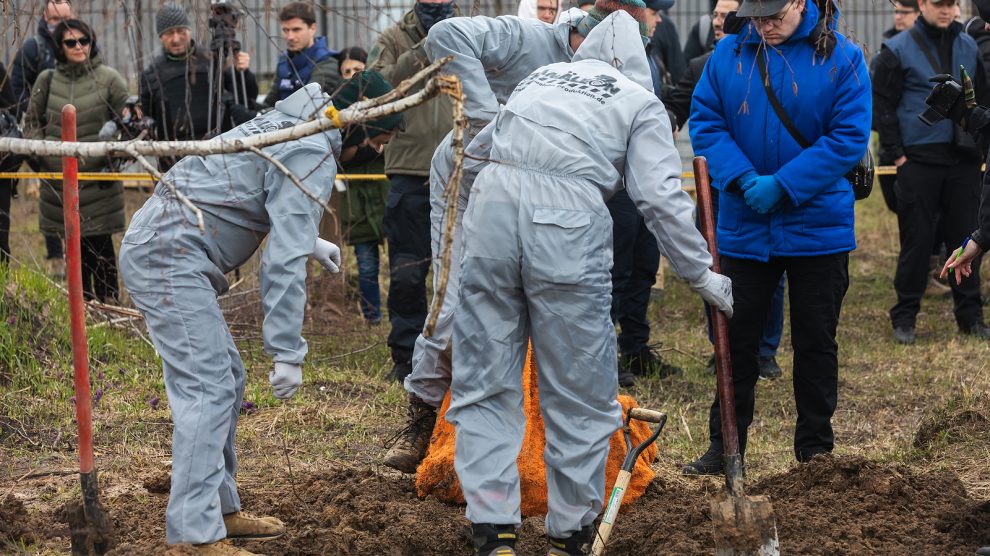 Posts casting doubt on evidence of alleged war crimes in Bucha continue to be shared on social media despite independent investigations that demonstrate Russian war crimes in the town.

Some of the clearest independently-verified evidence of Russian war crimes in Ukraine was published on April 21 by Human Rights Watch, which says that Russian forces committed “a litany” of apparent war crimes during their occupation of Bucha, a town about 30 kilometers northwest of Ukraine’s capital, Kyiv, from March 4 to 31.

Human Rights Watch researchers who worked in Bucha from April 4 to 10, days after Russian forces withdrew from the area, found extensive evidence of summary executions, other unlawful killings, enforced disappearances, and torture, all of which would constitute war crimes and potential crimes against humanity.

“Nearly every corner in Bucha is now a crime scene, and it felt like death was everywhere,” says Richard Weir, crisis and conflict researcher at Human Rights Watch. “The evidence indicates that Russian forces occupying Bucha showed contempt and disregard for civilian life and the most fundamental principles of the laws of war.”

The Human Rights Watch research comes just a day after analysis by the Institute for Strategic Dialogue found that posts casting doubt on evidence of alleged war crimes in Bucha have been shared hundreds of thousands of times on Facebook.

The Institute for Strategic Dialogue’s researchers analysed the 10 most shared posts on Facebook mentioning Bucha in 20 countries and found 55 posts disputing evidence of violence against civilians.

These posts were shared 208,000 times in the week to April 6, compared with 172,000 shares that did not question the veracity of images emerging from the town.

The Russian Defence Ministry has repeatedly denied allegations that its forces killed civilians in Bucha, stating in a Telegram post on April 3 that “not a single local resident has suffered from any violent action” while Bucha was “under the control of the Russian armed forces,” and claiming instead that the evidence of crimes was a “hoax, a staged production and provocation” by authorities in Kyiv.

The cases documented represent a fraction of Russian forces’ apparent war crimes in Bucha during their occupation of the town.

The chief regional prosecutor in Bucha, Ruslan Kravchenko, told Human Rights Watch on April 15 that 278 bodies had been found in the town since Russian forces withdrew, the vast majority of them civilians, and that the number was expected to rise as more bodies are discovered. Prior to the conflict, Bucha had a population of about 36,000.

Serhii Kaplychnyi, head of the municipal funeral home in Bucha, said that, during the Russian occupation, his team placed dozens of bodies in communal graves outside the Church of St Andrew and All Saints, after they ran out of space in the morgue. Only two of those buried were members of the Ukrainian military; the rest were civilians, he said. As of April 14, local authorities had exhumed more than 70 bodies from the church site.

Another funeral home worker, Serhii Matiuk, who helped collect bodies, said that he had personally collected about 200 bodies from the streets since the Russian invasion began on February 24. Most of the victims were men, he said, but some were women and children. Almost all of them had bullet wounds, he said, including around 50 whose hands were tied and whose bodies had signs of torture. Bodies found with hands tied strongly suggests that the victims had been detained and summarily executed.

Human Rights Watch also documented the details of 16 apparently unlawful killings in Bucha, including nine summary executions and seven indiscriminate killings of civilians – 15 men and a woman. In two other documented cases, civilians were shot and wounded, including a man shot in the neck, as he was standing in his apartment on an enclosed balcony with his family, and a nine-year-old girl who was shot in the shoulder while trying to run away from Russian forces.

Various national and international jurisdictions have already opened investigations into apparent war crimes and other serious crimes committed in Ukraine, including the Ukrainian authorities, the International Criminal Court (ICC), and third countries, such as Germany, using the principle of universal jurisdiction.

The United Nations Human Rights Council has also established a Commission of Inquiry into serious human rights and international humanitarian law violations in Ukraine, and its work could provide important assistance to the ICC and other judicial authorities.

To support these and other accountability efforts, Human Rights Watch says that Ukraine should urgently ratify the ICC treaty and formally become a member of the court.

National and international civil society have for years been pressing the authorities to join the court. Ukraine is not a member of the ICC, but it accepted the court’s jurisdiction over alleged crimes committed on its territory since November 2013. On March 2, a group of ICC member countries referred the situation in Ukraine to the court’s prosecutor, Karim Khan, for investigation. After receipt of the referral, Khan announced that his office would immediately proceed with an inquiry and has since traveled to Ukraine.

A domestic law aligning Ukraine’s national legislation with international law is also needed to bolster national authorities’ ability to build the legal framework necessary to support the effective domestic investigation and prosecution of international crimes. The absence of domestic legislation has been one of the key barriers in domestic accountability efforts. A bill adopted by Ukraine’s parliament on May 20, 2021 could help authorities prosecute war crimes and crimes against humanity domestically. However, it has not been signed into law by Ukraine’s president, Volodymyr Zelensky.

In his nightly address to Ukrainians, Zelensky said on April 20 that he will do “everything he can” to bring to justice “every Russian troop and commander guilty of war crimes.”

“Every surname, every home address, every bank account – we will find everything,” said the Ukrainian president.