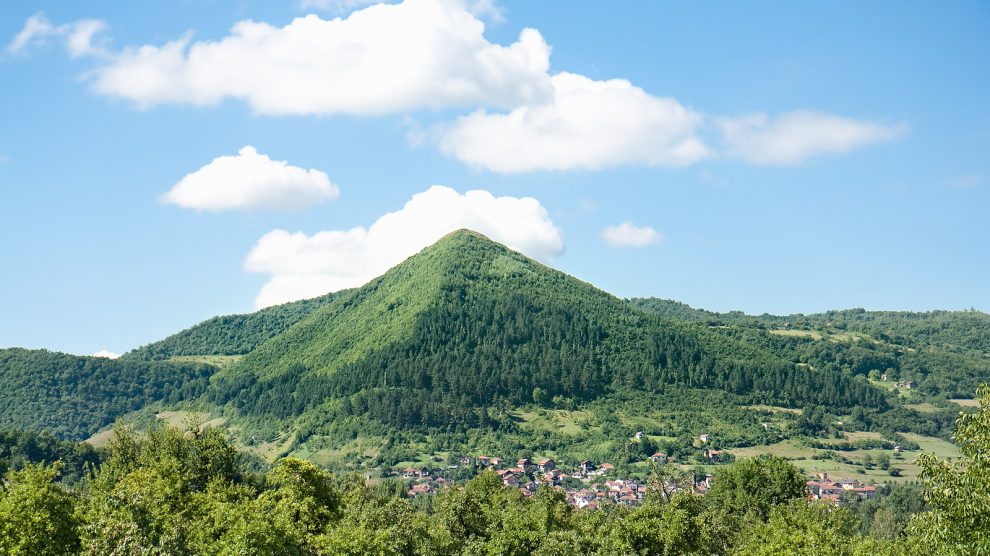 Let’s be honest: pyramids are not the first thing that come to mind when thinking of Bosnia and Herzegovina. But one Bosnian town is increasingly proud of its “pyramids”, attracting new age tourist euros and scorn from the scientific community in equal measure.

Visoko, around 35 kilometres north of Bosnia’s capital Sarajevo, is the site of a cluster of hills that it is often said look like pyramids.

Many locals claim, however, that it’s more than just a passing resemblance.

For people like Semir Osmanagić, the hills are actually the largest man-made pyramids on Earth.

For the past 15 years, Mr Osmanagić has advanced the pyramids theory, based on several excavations which have taken place since 2006. According to him, the pyramids were most likely built by the Illyrians, one of the ancient communities of the Balkans. In an interview in 2017 Mr Osmanagić claimed the structures date back 34,000 years.

He further claims that tunnels below the hills, known as the Ravne tunnels, are also man-made and equally ancient, He says that he has discovered “standing waves” at the top of the largest hill which travel faster than the speed of light and allow for intergalactic communication.

“Ancient peoples built a machine with which they could communicate with the furthest reaches of the cosmos,” Mr Osmanagić told the Russia-based web portal Sputnik. In the same interview, he extolled the health benefits of visiting the pyramids, noting that they could help those with high blood pressure and alleviate hyperglycaemia.

Unsurprisingly, Mr Osmanagić is light on official archaeological credentials. He holds a master’s degree in international economics, and has lived in the United States where he founded a manufacturing company of which he is still the CEO.

He has claimed – in a book, The World of the Maya – that the Mayans are “watchmakers of the cosmos” who are descended from aliens from the star cluster Pleiades.

Mr Osmanagić’s Archaeological Park: Bosnian Pyramid of the Sun Foundation now funds the promotion and investigation of the Bosnian site.

And promote it he has. Over the years, local authorities have funded excavations of the site and allowed schoolchildren to visit the pyramids where they were taught they are part of “Bosnian heritage”.

Volunteers are now constructing a botanical garden at one the pyramids, where meditation sessions are held. Another of the hills has been substantially altered and now resembles a steeped pyramid.

The complex attracts many visitors which for Visoko, a small town of around 40,000 inhabitants, has been a boon in economic terms.

Serbian tennis star Novak Đoković, who is no stranger to New Ageism and quackery, is a big fan of the Bosnian pyramids. Earlier this month he completed his third pilgrimage to the site, and met with Mr Osmanagić himself.

What does the science say?

Scientists believe that the hills are not pyramids at all, but rather natural structures known as flatirons. These do resemble pyramids, but they are the result of the differential erosion of a layer of resistant rock overlaid on softer strata.

Flatirons are found across the globe, from Ethiopia to Russia, and in geological terms are not especially rare or interesting.

Nevertheless, with the marketing in place, tens of thousands of people are visiting the Bosnian pyramids each year.

The issue is not just that Mr Osmanagić is, in the view of scientific groups such as the European Association of Archaeologists who called the entire thing a “cruel hoax on an unsuspecting public”, promoting falsehoods. Activities such excavations and the construction of theme parks can potentially negatively affect the actual archaeological heritage of the area.

Visoko was an important medieval centre in Bosnia, and the site of the coronation of the Bosnian king, Tvrtko the First. In the Old Town, there is a medieval fortress whose inner bailey is a fine example of how towns looked in the era.

There is scarcely a scientific body in Europe that hasn’t condemned the pyramids theory yet its supporters are not backing down. Several intentional seminars have been held by its proponents, attracting many “alternative” scientists who advance various pseudoscientific theories.

And while many scientists have called on the local and federal authorities in Bosnia to end their support, in 2016 a second park was opened at the site, with the support of the local government who declared it it a “place of significance”.

Local politicians might be driven but tourist money, but why has the theory captured the imaginations of so many people and many volunteers?

Writing for the Smithsonian Magazine in 2009, American journalist Colin Woodard says the pyramids are a social phenomenon born out of the horrors and destruction of the Bosnian War.

With widespread infrastructural damage (which in the Visoko region was estimated at around 200 million US dollars) people are drawn to the idea that their region was once the seat of an advanced and mighty ancient civilisation. The potential tourism revenue is handy too.

Similar claims exist elsewhere in the region. In Serbia, parapsychologists and other assorted New Age “scientists” have claimed the Rtanj mountain as the site of such things a star gate, a cosmic lighthouse, and that the mountain contains proof that Serbs actually originate from the long lost city of Atlantis.

Others, however, have claimed that ancient Serbs were actually once at war with the Atlanteans.

Whatever the explanation for such claims, there seem to be enough believers in the Western Balkans for them to endure. The Bosnian pyramid complex is not shutting down anytime soon.