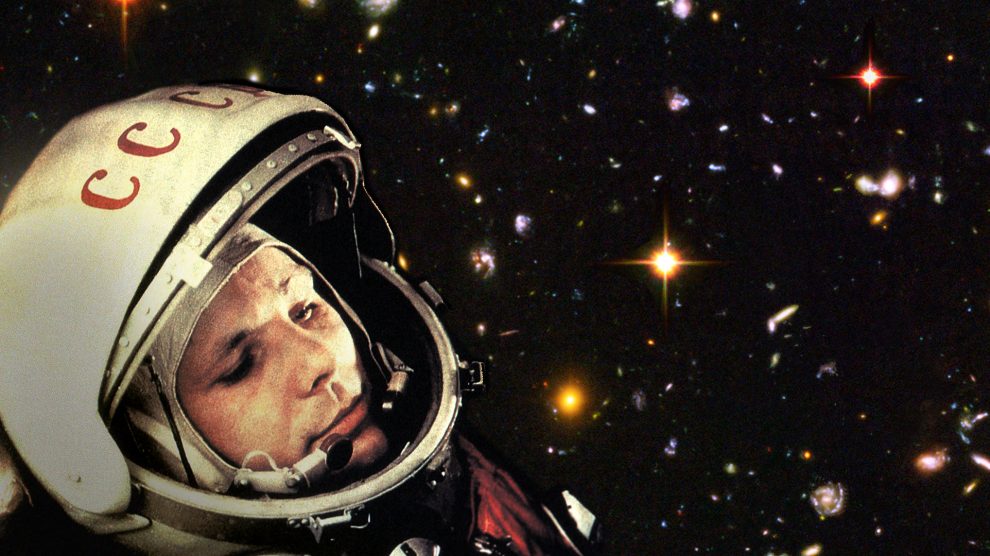 Sixty years on from the first manned space flight the journey of Yuri Gagarin around the Earth retains an importance that transcends history and propaganda.

April 12 marked the 60th anniversary of one of the most important milestones in the history of humanity: for the first time, a human being emerged from our planet into the inhospitable cosmos. Humanity had peaked: it had managed to transcend the limitations of nature through ingenuity, courage and the very human power of collectivism.

Yuri Gagarin is the bearer of this extraordinary achievement. Born on a collective farm to a humble family – his father was a carpenter and bricklayer, his mother a dairy farmer – he was the perfect poster boy of the Soviet Union’s finest moment.

Gagarin’s 108-minute journey around the Earth was the most significant in a series of “firsts” accomplished by the Soviet Union’s space programme: Sputnik, the first man-made object in space; Laika, the first living being in space; Luna 2, the first lunar probe; Valentina Tereshkova, the first woman in space; and Alexei Leonov, who made the first “space walk”.

All accomplished less than two decades after the country bore the brunt of the fight against Nazi Germany.

It was these early successes that prompted US President John F. Kennedy to mobilise the resources of the wealthiest and most powerful nation in the world in an effort to catch up with the accomplishments of a country which had begun the century as a poor, backwards, overwhelmingly agrarian society. This would eventually lead to the Apollo 11 mission which took humans to the Moon, another fine achievement in the history of the human race.

For some time, it looked as though the Soviets would win the Cold War. The string of space programme accomplishments coincided with a proliferation of Marxist national liberation movements from Angola to Bangladesh. Newly-established nations emerging from colonial yokes more often than not aligned themselves with their ideological bedfellows in Moscow. Two of the largest nations in the world were under socialism. United States military power was being checked by an army of Vietnamese farmers.

By the 1980s, these fears had petered out as the Soviet economy slowed from its formerly remarkable rate of growth, China tied its development to western consumption and once idealistic third world movements succumbed to the realities of geopolitics. But certain accomplishments of the period will endure. And the largest of these is undoubtedly the triumph of human will represented by Yuri Gagarin’s orbit around the earth. In 2017, the United Nations marked April 12 as the International Day of Human Space Flight. Streets along the world bear Gagarin’s name – even in places such as Kampala, Uganda.

Gagarin was born in 1934 in the village of Klushino in western Russia. His childhood was marred by the traumatic experience of Nazi German occupation – his family was kicked out of their home to make way for a German officer and lived in a tiny hastily-built mud hut. Klushino was not liberated until March 1944 in the aftermath of the Bryansk Offensive.

Having spent time as a teenager working in a foundry, his natural intelligence and easy grasp of technical skills were noticed by his higher-ups and he was recommended for the Soviet Air Force. Unwittingly, over the course of his pilot training, he had also been earmarked for the Soviet Union’s space programme.

Gagarin was eventually selected for the pioneering mission for multiple reasons. Some sources claim that in a secret ballot among 19 trainee astronauts, 17 voted for Gagarin to carry out the mission. Beyond his natural aptitude, he was also described as extraordinarily calm and positive. His diminutive stature (he was only 1.57 metres tall) allowed him to comfortably fit in the tiny capsule, which was just two metres wide. Finally, his background – born on a collective farm to a peasant family – validated the Soviet socialist message.

Although the Soviet Union’s propaganda was full of mythmaking and Manichean conflicts, they did not always exaggerate. This is one of those cases. The Soviet era saw a remarkable era of social mobility, virtually unseen in the rest of the world – children of peasants, whose grandparents or even parents likely couldn’t even read (in 1916, literacy in European Russia was just 56 per cent) would end up as generals, artists, party officials and even astronauts.

The space race was one of the healthiest ways in which the rivalry between the United States and the Soviet Union played out.

Both for propaganda purposes and for the potential military applications of the technologies, the two superpowers vied for supremacy in this domain. It is unfortunate then, that since the end of this rivalry, few space projects have come close to capturing the imagination of the world the way the extraordinary advances of the 1960s, from Yuri Gagarin to Neil Armstrong, did.

And now, with the privatisation of space research, priorities are shifting. While the major accomplishments of the space race, whether in the United States or the Soviet Union, were the result of huge collective state-driven efforts, now, public funds are funneled into private pockets to open the door to the possible resource extraction of the heavens.

Despite this, the fact remains that humanity once accomplished what it was never supposed to by physically leaving our home environment.

And this was not done by a billionaire, or a banker, or a monarch – but by the son of a carpenter and milkmaid.