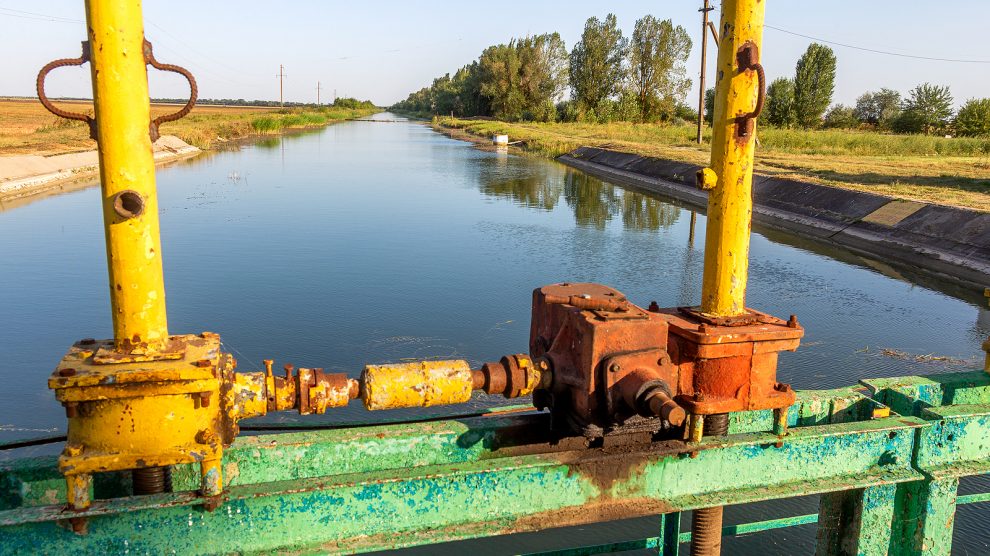 A deepening water crisis in Crimea is putting severe strain on the Russian government’s finances. Moscow is also under increasing pressure to deliver on the promises it made when illegally occupying the peninsula, internationally recognised as Ukrainian territory, in 2014.

This crisis dates back to 2014 when Crimea, already under Russian occupation, voted in a referendum widely regarded as not free or fair to become a province of the Russian Federation. Ukrainian authorities subsequently blocked the North Crimean Canal which had been supplying over 85 per cent of the peninsula’s water supply.

Crimea has always been an arid region with comparatively little rain and snowfall. What rivers there are are significantly smaller in volume than the Dnipro, for example. In the 1950s, only 155 out of 926 settlements had consistent access to clean drinking water. This prompted Soviet authorities to begin constructing the Crimean Canal in 1957 – three years after administration of Crimea was transferred to the then Ukrainian Soviet Socialist Republic.

Completed in 1971, the canal diverted water from the Kahkovka Reservoir in southern Ukraine, fed by the Dnipro. With independence, maintenance of the canal was neglected and by 2013, water flows were just one-third of 1980s levels. Despite this, the situation did not reach critical levels until the canal was fully dammed in 2014.

For Ukraine, blocking the canal was one of the few methods it could employ to put pressure on Russia.

Although a statement by the Ukrainian Foreign Ministry asserted that “Russian occupation authorities in Crimea demand water for the accelerated development of military enterprises and facilities”, this explanation doesn’t quite hold up to scrutiny. According to Ukraine’s Deputy Foreign Minister Emine Dzheppar (herself a Crimean native), there are currently 32,500 Russian troops stationed in Crimea. Even if Russia were to scale this up to 100,000, this would still be a fraction of the population of the peninsular, which has risen to over three million since its secession.

Instead, the Ukrainian blockade can be seen as a tactic to hike the costs of Russia’s administration of Crimea – an asymmetric sanction of sorts.

And it certainly has been effective: according to former deputy head of Russia’s Central Bank, Sergei Aleksashenko, the first five years of the occupation cost Russia 1.5 trillion roubles (roughly 23 billion US dollars in 2019). This represents three years of Russian state expenditure on healthcare.

Satellite images from as early as 2018 show increasing desertification in the already arid region, particularly in the central and northern steppes. Agricultural output has plummeted, with cultivation of water-intensive crops like rice coming to a halt. In 2014, only 17,000 hectares of land were being tilled, compared to 140,000 the previous year and 400,000 in the Soviet era.

People are reported to be selling their property in the most severely affected areas for knockdown prices. Weather conditions last year exacerbated the crisis: 2020 saw a mild winter with little snowfall followed by a scorching summer, the driest year in 150 years in Crimea. This further depleted alternate sources of freshwater, like smaller reservoirs and underground streams.

Any question of resuming the flow of water to Crimea is shot down by political considerations with representatives of both Ukraine and Russia using inflammatory language.

On March 1, Arsen Avakov, Ukraine’s minister of internal affairs, said in an interview that “Ukraine will not supply water to Crimea until it returns to Ukraine”.

Russia’s permanent secretary to the Organisation for Security and Co-operation in Europe (OSCE), branded Ukraine’s blockade of the canal as an “attempt at genocide” – although according to the Geneva Conventions, the responsibility of providing water to an occupied territory is borne by the occupier.

Elizabeth Thorsell, a spokesperson for the UN High Commissioner for Human Rights called on both Kyiv and Moscow to do their part in providing water to Crimea.

In October last year, the Russian Duma approved 50 billion roubles – over 650 million US dollars – to ensure a reliable supply of clean water for Crimea. Already, Russian authorities have been undertaking extensive drilling efforts to find new underground reservoirs. The Duma claims that the crisis could be resolved within five years. A desalination plant projected to produce 40,000 cubic metres of freshwater a day is also under construction.

On March 10, Vladimir Konstantinov, chairman of the State Council of Crimea announced that Crimea is planning to file a lawsuit against Ukraine “due to the losses caused to the peninsula by the water blockade”. Although this is unlikely to go anywhere, it can succeed in bringing international attention to the issue.

This leaves Ukraine in a difficult situation. Although its actions are an effective, nonviolent way of increase the burden of the occupation on Russia’s fragile economy, blocking the canal will not resolve the long-term question of Crimea – in fact the hardships caused may only exacerbate resentment within the peninsula, thus greatly hampering any prospect of reunification.

While Ukraine has acknowledged the needs of its citizens in Crimea, it has argued that reopening the canal would help Russian military efforts on the peninsula. With this in mind, there would be no way to simultaneously provide water to the Crimean civilian population, and deny it to Russian military forces stationed in the region.

If the upcoming lawsuit does bring international attention to the situation, it could be spun to make Ukraine appear responsible. And if Russia is allowed (or rather forced) to solve Crimea’s water shortages by itself, this will only increase the legitimacy of the occupation in the eyes of the local residents.

If that happens, reunification will be nigh-on impossible.