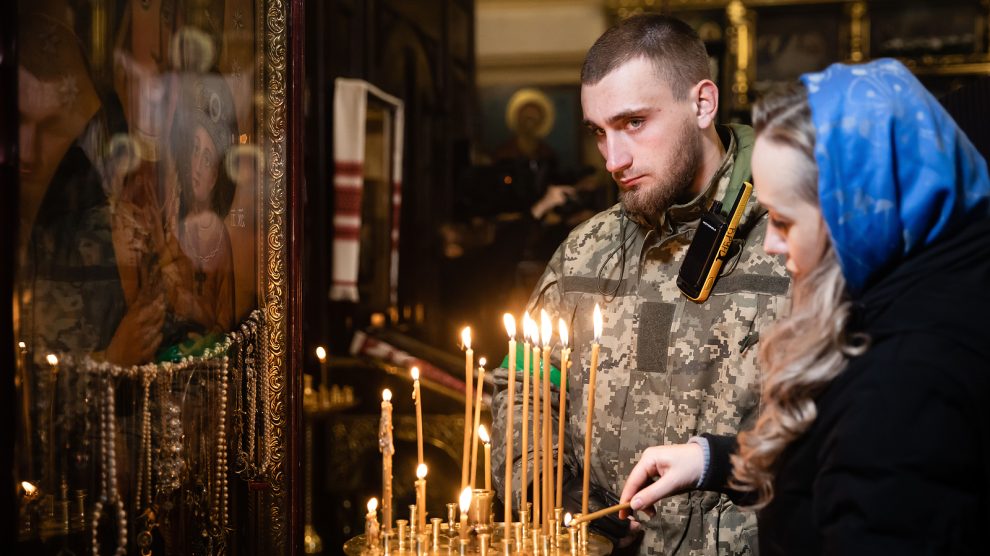 A much-shared tweet from a highly questionable source accusing Volodymyr Zelensky of banning Ukraine’s Orthodox Church and arresting priests is way off the mark.

When it comes to identifying false news, refusing to take anything that Donald Trump Jr. tweets at face value is a decent rule of thumb. The eldest son of the eponymous former US president has a track record of spreading misinformation and fake news on topics as diverse as the Covid-19 pandemic or the now mothballed Nord Stream 2 gas pipeline that links Russia with Germany.

Last week Trump Jr. turned his attention to Ukraine, falsely claiming that the country’s president, Volodymyr Zelensky, had banned the Ukrainian Orthodox Church and had begun arresting its priests.

The claims are not true, but the tweet in which they were made has so far been shared almost 18,000 times.

What Zelensky in fact last week did was call for Ukraine’s MPs to look at how a branch of the Orthodox Church under the direct control of Moscow could be prevented from operating in Ukraine.

In his nightly address last Thursday, Zelensky said that he wanted a law that would “make it impossible for religious organisations affiliated with centres of influence in the Russian Federation to operate in Ukraine”, referring to the Ukrainian Orthodox Church affiliated to Moscow.

Russia’s response was immediate and predictable. Dmitriy Medveedev, a former president and prime minister, labelled Zelensky and the Ukrainian authorities as “enemies of Christ and the Orthodox faith”.

Ukraine has long held valid concerns that the Moscow-affiliated Ukrainian Orthodox Church poses a security threat, and has instead promoted the Orthodox Church of Ukraine, which in 2019 was granted “autocephaly” or independence by the Patriarch of Constantinople, the symbolic “first among equals” of the world’s Orthodox churches.

The process was ratified in a ceremony in Istanbul (still referred to as Constantinople in Orthodox circles) on Orthodox Christmas Eve, 2019, when the Metropolitan of Kyiv, Epiphanus I, received Tomos from Bartholemew, the Ecumenical Patriarch of Constantinople.

It meant that for Constantinople, which adheres to a strict “one country, one church” principle, the Orthodox Church of Ukraine – loyal to Kyiv – was now the only canonical Ukrainian Orthodox church.

For Ukraine, it was a key moment, as it represented another step away from political, economic and religious subservience to Russia.

Indeed, as a result of the split, Russia lost property, priests, believers and, crucially, its spiritual and symbolic authority over Ukraine. Both Russian President Vladimir Putin and the head of the Russian Orthodoc Church, Patriarch Kirill, condemned the move and broke off relations with the Constantinople Patriarch.

‘A centre of the Russian world’

In May, following Kirill’s strong statements of support for Russia’s brutal invasion, many of the parishes in Ukraine which had remained loyal to Moscow cut ties with the Russian Orthodox Church. There is no formal data on how many Ukrainian parishes remain in Moscow’s orbit, but given that 2020 estimates put the figure at 14 per cent, the number is likely to now be considerably lower.

In the centre of Kyiv, however, the Pechersk Lavra Monastery, colloquially known as the Cave Monastery, remains under the control of the Moscow-affiliated church.

It was last month raided by Ukraine’s security service, the SBU, which uncovered “dubious” Russian citizens, large sums of cash in various currencies and pro-Russian literature.

The SBU said the operation was aimed at preventing the use of the monastery as “a centre of the Russian world” and carried out to look into suspicions “about the use of the premises … for sheltering sabotage and reconnaissance groups, foreign citizens, [and] weapons storage”. Other religious sites in Ukraine were also searched.

Last month, the SBU confirmed that since Russia began its invasion in February, 33 priests have been arrested for assisting Moscow, either for gathering intelligence for – or offering a hiding place to – Russian forces. They are not above the law.

Mayor of Kyiv Vitaly Klitschko last week said that “Putin cannot be allowed to steal our Christmas” as Russian airstrikes knock out power and wreak havoc on critical infrastructure. But even the date of Christmas this year has political connotations.

For centuries Ukrainians have celebrated Christmas on January 7, the date on which Jesus was born according to the Julian calendar.

This year, however, the Orthodox Church of Ukraine is allowing its congregations for the first time to celebrate Christmas on December 25, according to the western, Gregorian calendar.

It is yet another move away from Russia.

For Georgia, there is no time for complacency
Extension of fuel price cap would put Hungary on course for yet more EU trouble
Comment