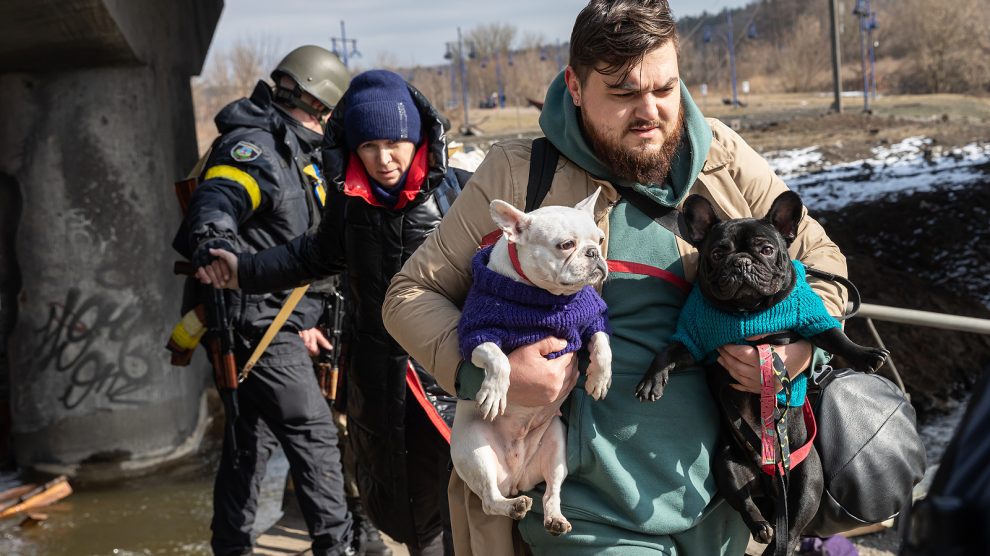 The latest film from director Evgeny Afineevsky blends personal accounts of Russia’s invasion of Ukraine with remarkable first-hand footage to tell a story of resilience, survival, and hope.

Russia’s war on Ukraine did not begin on February 24, 2022. While on that day Moscow launched a full-scale invasion of its neighbour, it’s important to note that parts of Ukraine had by then been occupied by Russia for almost eight years.

Many thousands had already been killed fighting in Luhansk and Donetsk in the east of the country, while in Crimea many more had been arrested, deported, tortured, executed.

Freedom on Fire, the latest film from Evgeny Afineevsky, the director of the outstanding, Oscar-nominated Winter on Fire, which skillfully told the story of the Maidan Revolution of 2013-14, picks up the story shortly after that revolution had deposed the pro-Russian president, Viktor Yanukovych, forcing him to flee to Russia.

Seeing Ukraine decisively turn west, and away from Russia, Vladimir Putin decides to “go for broke”, says Nataliia Nagorna, a reporter for the news service of Ukraine’s 1+1 TV channel, who features prominently in the film.

Crimea is annexed, separatist movements in Donetsk and Luhansk are armed. War begins.

Then comes the full-scale 2022 Russian invasion, and Putin’s attempt to take Kyiv “in three days”. Through the personal stories of soldiers, doctors, religious leaders, children, and international volunteers, Freedom on Fire makes up a humanising diary of millions of people whose lives have been turned upside down by eight years of conflict.

It depicts the horrible realities of Putin’s brutal, unprovoked war. It is an exploration of the courage of the Ukrainian people, fiercely determined to stand their ground. Demonstrating an astounding ability to unite as a people and defend the sovereignty of their country, Ukrainians show compassion and resilience even when surrounded by death, destruction, and war crimes.

“Freedom on Fire presents ordinary people at their most vulnerable, attempting to evade bombs and bullets while — in some cases — choosing which family members to save,” says Afineevsky. “By releasing the film now, I hope I can bring immediate clarity to viewers confused by the deliberate misinformation campaign surrounding current events in Ukraine.

“Despite the ongoing brutality, the nation is not on its knees. The movie’s essence is singing, hugging, volunteers bearing gifts, and children drawing pictures for the soldiers who are keeping them safe. That’s beauty: People who know how to laugh and love.”

‘Everything can be rebuilt except lives’

Afineevsky says that one of his goals was to detail the struggles associated with reporting from the front lines of a warzone, subsequently dedicated the film to all journalists, filmmakers and members of the press who have been killed and who are risking their lives today to shine a light on the stories and images of different conflicts for the world to see.

“My main character [Nagorna] is a female journalist, largely because Marie Colvin remains a constant presence in my mind,” adds Afineevsky.

Colvin, a British reporter, was killed in Syria in 2012.

“I didn’t know her personally, but I immersed myself in her work while making Cries from Syria. Colvin died doing her job and telling the truth about that country’s civil war. Freedom on Fire is dedicated to storytellers who risk danger to give voices to the voiceless. Everything can be rebuilt except lives.”

Afineevsky’s film includes much that is difficult to watch: the Russian bombing of a maternity hospital in Mariupol, tales of Russian brutality in towns it had occupied. But there also moments of pure joy: children playing, an orchestra performing in the Kyiv metro, a stand-up comedy show in a bunker.

A highly personal chronicle of the first weeks of the invasion, it’s easy to fall into the trap of believing that what we see in Freedom on Fire happened in the distant past. It didn’t: it happened this year, and Ukraine’s struggle to defeat Russia continues.

When the final victory comes, Afineevsky will no doubt be on hand to document it.

Postcards from the Silk Road: In search of Uzbekistan’s best plov
Winter on Fire: When Ukraine changed forever
Comment