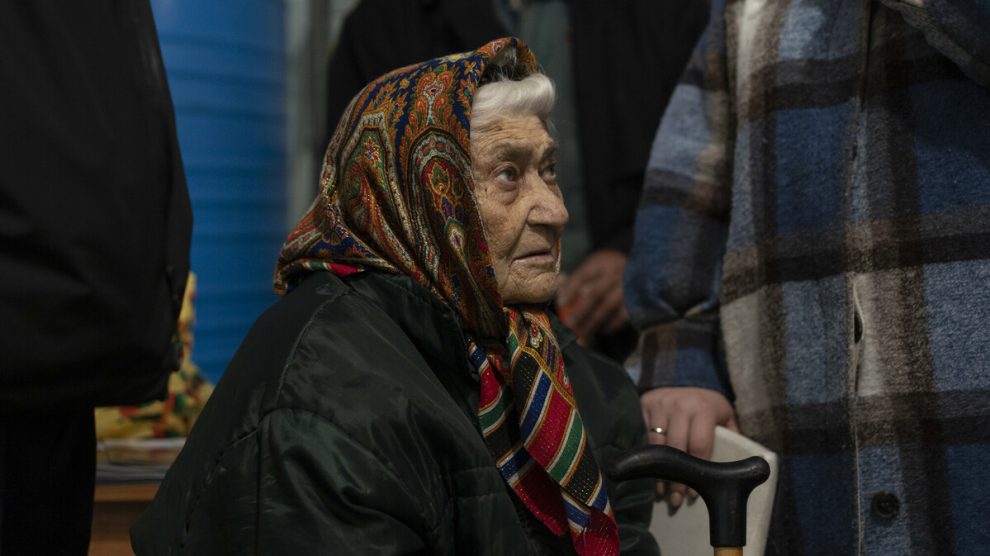 As much of the Ukrainian capital struggles to cope with power outages, concerns grow for Ukrainians living in areas outside of government control and along the front lines.

Russian cruise missiles once again struck key infrastructure in Kyiv on November 23, causing the most serious power outages of the war so far.

The Russian military fired about 67 cruise missiles and 10 drones during the attack, according to Kyiv, mostly targeting energy infrastructure and causing more damage to Ukraine’s already struggling power network.

Zelensky called for Russia to be denied a vote on any decision concerning its actions.

“We cannot be hostage to one international terrorist,” he said. “Russia is doing everything to make an energy generator a more powerful tool than the UN Charter.”

“Having struggled on the battlefield, Moscow is now adopting a cowardly and inhumane strategy that punishes Ukrainian men, women and children,” she said.

The Russian president “will try to freeze the country into submission,” she added.

Beyond the capital there are growing concerns for the fate of vulnerable people living in areas outside of Ukrainian government control and along frontlines. According to the Norwegian Refugee Council (NRC), they face extreme suffering and risk losing their lives this winter.

“Right now, across the country, people are facing a grim choice: flee or freeze. This week, I met families in Zaporizhzhia who fled for their lives from bombed out basements through the only crossing point on the frontline. They were shelled as they crossed. From a one-month-old to 91-year-old, they arrived cold and traumatised, but deeply relieved that they are now safe,” said Jan Egeland, NRC’s secretary general on a visit this week to Ukraine.

He emphasised that humanitarians can provide the essentials people need to survive, but they must be able to access communities currently out of reach.

“We urge the Russian Federation to do their duty under international humanitarian law to provide safe passage for aid agencies into areas of active hostilities and under its control, so that the most vulnerable are not left behind. Aid workers must not be targeted or criminalised for supporting those that need it the most,” added Egeland.

A new wave of mass displacement

Millions of people living close to the frontlines in Kharkiv, Donetsk, Kherson, Luhansk, Mykolaiv, and Zaporizhzhia oblasts have limited or no access to food, fuel, water or adequate shelter. Many communities in areas of active hostilities or under Russian control, have received virtually no assistance since the war began last February. Some areas, including large parts of the Donetsk and Luhansk region, will have no heat for the entire winter, according to the Ukrainian government.

This, along with the recent damage and destruction of critical energy infrastructure, could trigger new waves of mass displacement. Possibilities for safe civilian movement across the frontlines remain extremely limited. Those who choose to leave the areas outside of government control are forced to undertake lengthy, physically exhausting and costly trips across Ukraine or through Russia to get to Europe, often travelling via Belarus, Georgia, Armenia or Latvia to reach safety.

“This is a brutal conflict targeting the most vulnerable. Many civilians, including those who are sick, disabled or elderly, cannot or will not leave their homes under bleak weather conditions. They must not be forgotten and must receive aid and assistance before it’s too late,” said Egeland.

Egeland emphasised that aid organisations are bound by the humanitarian principles of neutrality, independence and impartiality. He reaffirmed that all parties to the conflict must ensure that aid workers and civilians are not sanctioned or penalised for providing or receiving aid or for humanitarian engagement.

“We call on all parties to the conflict to prioritise protection of civilians and ensure they can access the assistance they so badly need to survive this winter. The international community should issue general carve outs in sanctions regimes so that aid can get to those in need as quickly as possible, wherever they are,” said Egeland.