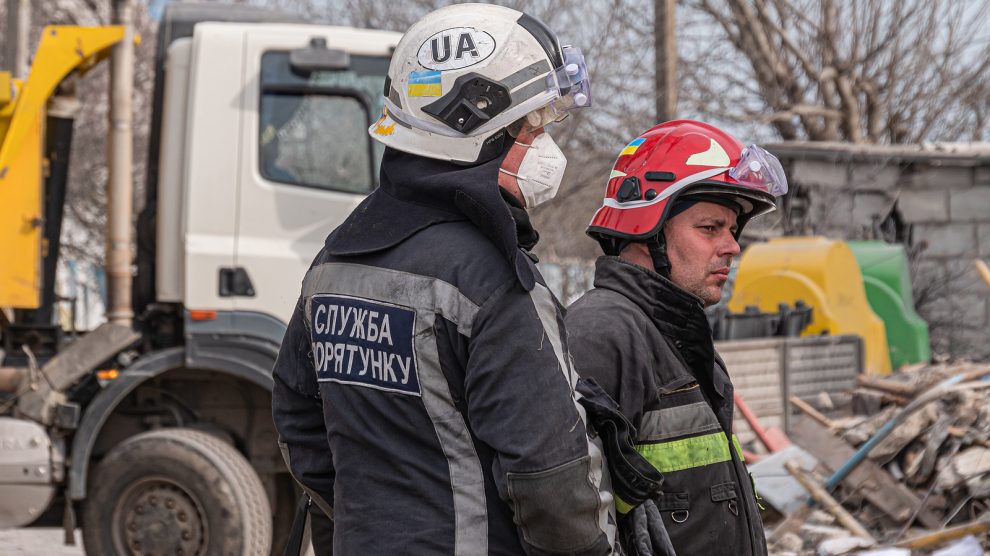 One of the goals of any war is to demoralise the enemy, primarily by inflicting damage on civilians. Since World War I, that has included strategic bombing of energy systems to demoralise populations. It has never worked.

The war unleashed by Vladimir Putin’s government in Ukraine uses a strategy repeatedly tested on the fields of continental warfare.

For six weeks, Russia has been trying to destroy Ukraine’s energy infrastructure with missile strikes. Moscow openly admits that it is doing this in order to morally break the Ukrainians and force Kyiv to sit down at the negotiating table.

However, while bombing energy infrastructure causes serious damage to attacked states, history demonstrates that they do not affect the outcome of war.

The pros and cons of attacks on energy facilities have been analysed by military experts for decades.

I will draw parallels between these studies and current events in Ukraine.

The founder of the idea of strategic bombing was the Italian general and military theorist Giulio Due (1869-1930). Promoting his doctrine, Due believed that direct air strikes against enemy state and economic centres could lead to quick victory. Over time, followers of this doctrine expanded the scope of attacks on energy targets.

During World War I, military strategists recommended that German commanders assign an important role to Zeppelin LZ 104 airship raids on British settlements, infrastructure, and power plants. The air attacks caused a lot of problems, especially for the civilian population. But, as we know, these attacks were the end of the combat airship era.

Air attacks on power plants during the Spanish Civil War and the Second Sino-Japanese War in the 1930s – according to military experts who observed the fighting – led to the conclusion that these attacks were not effective at all. As a result, some air forces, such as the Luftwaffe, concentrated their efforts on directly supporting the troops. After that unsuccessful experience was repeated again and again.

In World War II, both Allied and German planners developed air war plans to take advantage of the supposed advantages of the Due Doctrine.

The Allies prioritised the destruction of Germany’s electrical system because German industry was almost entirely dependent on electric motors, while similarly, after defeat at Stalingrad, Nazi Germany tried to regain momentum by attacking the interconnected Soviet electrical grid.

These attacks did not yield the desired result for either belligerent side.

In Korea in the early 1950s, strategic bombing served a necessary function for the US and its allies throughout the war.

Initially, the military campaign was based on attacks on heavy industrial targets. But as the conflict continued, the Truman administration began to look for ways to make North Korea more accommodating to the world.

Rich in river water resources, North Korea had strong energy potential – an extensive network of hydroelectric power plants – and in 1952, the US turned to a strategy of aerial attacks on energy facilities.

Military strategists believed that targeted strikes would increase the enemy’s costs, reduce its combat effectiveness, wear down the civilian population, and force the country’s leadership to accept the proposed terms. Tactically the operation was successful, but it did not achieve what it desired. North Korea was able to meet its power needs with portable generators and continued to fight.

During the Vietnam War, the US again resorted to aerial attacks on energy infrastructure. It was assumed that the systematic destruction of the power system would lead to the surrender of the Hanoi government.

However, despite the loss of almost all power, the Vietnamese authorities were able to take sufficient measures to restore it – preserving damaged facilities using hand tools and portable generators.

In preparing to attack Iraq in 1990, the US command once again attached great importance to strikes on energy infrastructure: the country was larger than Vietnam and Korea and more dependent on electricity.

The purpose of the bombing was to cause strategic paralysis of the leadership in Baghdad. It again failed. According to Thomas Griffith, who was in an Iraqi prison during part of the operation, despite the strength of the airstrikes even in his jail the lights were on and the elevators were working.

In addition to the lack of evidence of the effectiveness of bombing energy infrastructure, there is a more negative factor for the attacker.

Military experts argue that the negative humanitarian impact far outweighs the military benefit. The military’s focus on direct damage to civilian populations is an outdated calculation of collateral damage in the 21st century with the increased lethality of weapons and the catastrophic reverberating effects of this technology on civilian life-support systems.

So, do strikes on energy infrastructure have no effect at all?

No. Today’s countries use a lot of electricity, but different areas of the economy and human activity depend on it in different ways. For example, history has never confirmed the impact of blackouts due to bombing on public morale – capitulation due to a blackout.

The same is true, according to analysts, of attempts to pressure political leaders through bombings. The anger of a people forced to suffer hardship because of blackouts is directed primarily against the source of the problem – that is, the country whose bombs or missiles are falling on power plants. Attempts by leaders to succumb to this pressure and negotiate can lead to a loss of prestige and perhaps more power than a determined policy of resistance.

The desire to win trumps winter

The area that is hardest hit by the blackout is military production. It is possible to shut it down or slow it down by cutting off electricity from factories. The industries that produce ammunition and weapons are highly dependent on electricity.

If, however, the war is not of long duration, or if a country is not overly dependent on domestic industrial capacity (in that it receives a lot of military equipment from abroad), attacks on energy infrastructure will not make much difference. This was demonstrated by North Korea and North Vietnam, whose main sources of weapons were the USSR and China.

As for Ukraine, it is common knowledge that its most modern weapons come from abroad, and that ‘Soviet’ weapons and ammunition come from depots rather than factories (for example, the only major Ukrainian ammunition factory is in Lugansk and was lost back in 2014, and no new similar enterprises have been built).

Therefore, Russia’s only motive for destroying Ukraine’s energy capacity remains the winter and the calculation that the cold will prove stronger than the Ukrainian desire to win.

So far, there is no indication that this will happen any time soon – and the history of previous wars gives not a single example that these inhumane measures actually work.