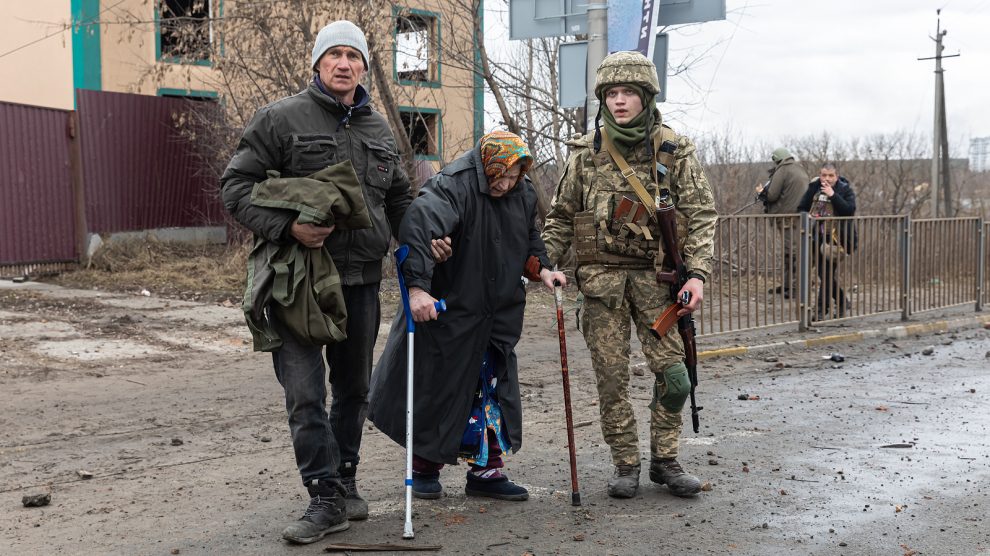 The Dayton Agreement, which ended the war in Bosnia and Herzegovina in 1995, is no model for Ukraine.

It’s hard to imagine what could be worse than the barrages that are raining down on Ukrainian cities right now, but the rocket and artillery fire will eventually stop. A more long term risk for Ukraine, one that will permanently hobble its chances of recovery, is a bad peace treaty.

A good peace treaty would recognise Ukraine’s territorial sovereignty and the independence of its government, thus enabling it to rebuild. International aid would pour in and the country could quickly recover. A bad treaty, on the other hand, would disable Ukraine’s government, enshrine outside power brokers, and ensure that the country was so dysfunctional that it could never prosper or defend itself with a powerful army.

But surely a peace treaty is just what’s needed for Ukraine? Surely, anything that ends the war is good?

A state within a state

That was the thinking in November 1995 when the leadership of Bosnia and Herzegovina was bullied into signing the Dayton Agreement, which brought a formal end to almost four years of war.

One of the problems with the Dayton Agreement was that it created a state within a state – the Serb controlled Republika Srpska – which includes the territory on which (according to international courts and tribunals) Bosnian Serbs committed genocide over the mostly Muslim population.

The Serb-controlled entity has been blocking Bosnia’s progress ever since the deal and is now demanding independence. After a decade-long slumber, the western powers are finally waking up to the risk of Russian/Serb mischief in Bosnia and are reinforcing the EUFOR armed force based here.

The peace treaty itself is “discriminatory”, according to Almira Delibegović-Broome QC, a Bosnian/British lawyer based in Edinburgh.

Bosnia’s constitution was drafted as part of the Dayton Agreement and the problem is that it assigns “privileged status” to three main ethnicities – Croat, Serb and Bosniak/Muslim. This means that if you are from a minority, Roma or Jewish for example, or even just want to call yourself a “Bosnian” citizen, “you cannot stand for the highest political office in the country, be a member of the presidency or the upper house of parliament”.

It also ensures that Bosnia’s neighbours, Croatia and Serbia, have powerful levers of control over Bosnia’s triple-headed presidency. The most recent example of this was when Republika Srpska vetoed Bosnia’s attempts to sanction Russia after it invaded Ukraine.

According to Vehid Šehić, founder of the Tuzla Citizens’ Forum in northeast Bosnia, another problem with the Dayton Agreement was that it made all three warring parties – the Croats, Bosniaks and Serbs – responsible for ongoing peace and development: “It’s not natural that the nationalist political parties that were active during the war were then made responsible for implementing the peace. It’s completely irrational. This is why we are still living in the wartime period of 1992 to 1995.”

Russia was going through one of its rare moments of liberalism at the time of the Dayton Agreement in 1995. Boris Yeltsin was in the president’s office and Russia’s prime minister, Viktor Chernomyrdin (later to be ambassador to Ukraine) witnessed the treaty’s signature alongside the leaders of France, Germany, Spain, the UK and of course the US. This so-called “Contact Group” of nations followed the US, which was driving the whole process forward.

In 1995 Russia and the US were closer than they had been in a century and when the massive NATO “Implementation Force” (IFOR) was imposed on Bosnia and Herzegovina the Russians participated with a paratroop brigade, were given an Area of Responsibility in northeast Bosnia and, extraordinarily, were under the military command of the overall NATO commander, US General Nash. This proves that Russia and NATO forces can work together perfectly well if there is a sensible leader in the Kremlin.

Things seemed to go well in Bosnia and Herzegovina for the following years. All sides were glad the fighting was over and, initially, the current Bosnian Serb leader (Milorad Dodik) was a gushing advocate of peace and reconciliation with the Bosnian Muslims and Croats. But when he realised that the West was losing interest, and he was losing popularity, he played the nationalist card and started portraying the Croats, Muslims and western powers as the enemy.

Needless to say, he’s very close to the Russians and who knows what advice they give him. (For more details on Republika Srpska’s disturbing relations with Russia, see here).

The irony is that a liberal (Yeltsin) handed over the keys of the Kremlin to a man who believes in a governing style that has more in common with Ivan the Terrible. But it has to be said that Vladimir Putin flirted with liberalism in his early years and had no objection to NATO expansion.

We can imagine that Russia’s former KGB operatives observed the Dayton Agreement with fascination; they would have seen how the West, with the best of intentions, enforced a treaty on a nation that has resulted in a totally dysfunctional state. The Russians can’t be blamed for the Dayton shambles, but they almost certainly learnt from it and may see it as a useful model for stirring up trouble elsewhere.

Maybe their plan in Ukraine is to rain down death and destruction, exhaust all parties, and then present a peace treaty that is based on “special rights” for the Russian minority as well as a large chunk of “autonomous” Kremlin-controlled territory. It would be a cheap way of controlling a large country: no need for an occupying army when you can veto anything you don’t like.

It would compound the tragedy of Ukraine if the western powers were to bully it into signing a treaty with the aggressor that would debilitate the country for generations to come. There is a tendency to assume that all parties come to peace treaties with good intentions. Such a mistake could be fatal for Ukraine.

Based in Sarajevo, Rupert Wolfe-Murray is promoting the forthcoming graphic history book Bosnian War Posters, by Daoud Sarhandi, to be published by Interlink on May 3, 2022. This article was first published at wolfemurray.com.

Ukraine’s spacetech community unites in defence of the country
Russia steps up shelling of Ukraine’s towns and cities: Emerging Europe this week
Comment