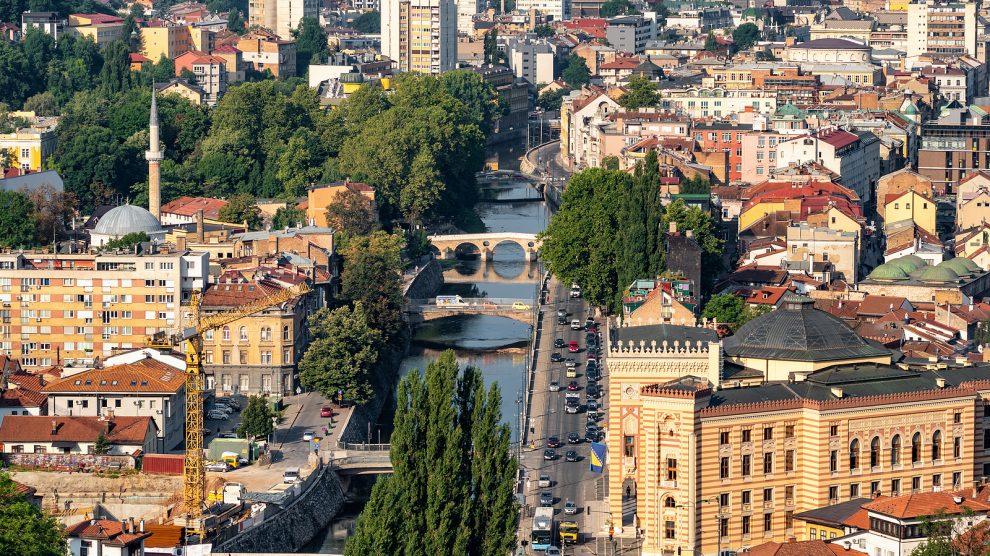 Bosnia and Herzegovina is, in many respects, a unique country. Its political system has often been called one of the most complicated in the world. So how does it all work? And does its complexity play a role in the country’s infamously unstable political landscape?

In order to understand today’s Bosnia and Herzegovina, it’s necessary to start with the Dayton Agreement.

Signed in 1995, it ended a bloody civil war but – according to some critics – merely froze ethnic tensions and created a political system that makes the country almost impossible to govern effectively.

A few months ago, a genocide denial law imposed by the Office of the High Representative caused a legal crisis in the country.

This law, which bans genocide denial in general, but especially the denial of the Srebrenica genocide, was met with fierce opposition from the Republika Srpska entity and its president Milorad Dodik.

True to form, Dodik threatened secession, Serbian representatives blocked parliament, and most recently Dodik has also threatened that the entity of Republika Srpska could withdraw from the Bosnia and Herzegovina’s joint military and judiciary structures.

But who is the High Representative? What is an Entity? These are not common terms in discourse surrounding a modern democratic republic. What exactly is going on in Bosnia and Herzegovina?

At the very top of Bosnia and Herzegovina’s political tree sits the Office of the High Representative (OHR). The High Representative’s role was outlined in the Dayton Agreement itself, and has the status of a diplomatic mission. The primary mandate of the OHR is to oversee the civilian implementation of the agreement.

But the High Representative – currently Christian Schmidt, a German – also possesses something called “Bonn Powers” — the power to adopt binding decisions (such as the genocide denial law) when local parties are unwilling or unable to act, and the power to remove from office public officials who violate legal commitments or the Dayton Agreement itself.

And who appoints the high representative? The 55 countries and organisations which make up the Peace Implementation Council (PIC), the international body charged with implementing Dayton.

Parliaments, many of them

To understand Bosnia and Herzegovina’s elected levels of governance, it’s necessary to look at how the country is structured.

It consists of two entities — the Federation of Bosnia and Herzegovina and the Serb Republic (known as the Republika Srpska).

One additional entity was formed in 2000 — the Brčko District — out of territory from both the other entities. It technically belongs to both but it is governed by neither.

These entities were created along ethnic lines. The Federation is mostly Bosniak (Bosnian Muslims) and Croat, while Serbs are the majority in Republika Srpska. Overall, the country is about 50 per cent Bosniak, 30 per cent Serb, and 15 per cent Croat, although these numbers are contested by Republika Srpska.

It’s these three peoples that are known as “constituent” — all three are referenced directly in the constitution and are exempt from ever having the status of minority or immigrant.

The directly-elected tripartite presidency, in charge of foreign, diplomatic and military affairs, reflects the constituent peoples. One Bosniak, one Croat, one Serb. The Federation entity selects the Croat and Bosniak members, while Republika Srpska selects the Serb.

Bosnia and Herzegovina’s parliament has two houses. The House of Representatives, elected via proportional representation, includes 28 members from the Federation and 14 from Republika Srpska. Those House of Peoples is elected indirectly by the parliaments of each entities — five Croats, five Serbs, and five Bosniaks.

This division of political power almost entirely along ethnic lines often said to be the country’s greatest problem.

“More than the complicated system, what affects [Bosnia and Herzegovina’s] stability is the divisiveness of the system that was created [by Dayton’,” says Maja Kazazic, a Bosnian genocide survivor. “It’s clear that division along ethnic lines is not effective nor does it nurture love, growth, forgiveness and a hopeful future. Splitting any country based on ethnic — or any other — lines is a recipe for disaster.”

Bosnia and Herzegovina has a de facto prime minister, called the Chairman of the Council of Ministers, nominated by the tripartite presidency and approved by the House of Representatives. He or she nominates the ministers in the state government.

And yet the state government is responsible for very little, given that both entities have significant autonomy. Both have prime ministers and their own parliaments. These parliaments have authority over education, healthcare, culture, and internal affairs, amongst much else.

Furthermore, the Federation is itself divided into 10 cantons, each with its own administrative government and a certain degree of autonomy on local issues.

This complexity contributes to tensions and instability at times, mostly relating to the Republika Srpska, particularly when that entity has such a combative leader as Dodik.

And yet for all his threats, secession is highly unlikely. Relations between Republika Srpska and the Federation will remain fraught, but Dayton ended a war and has (so far) done much to prevent a new one.

That’s probably the best that anyone could have hoped for.