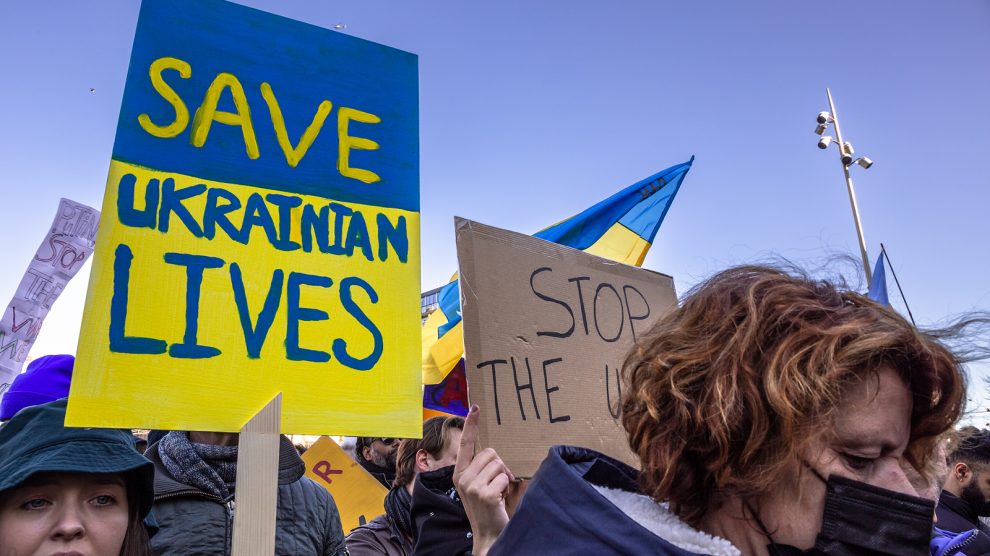 A no-fly zone over Ukraine to protect civilian life and critical infrastructure, including Ukraine’s nuclear infrastructure, should be the first mission of a Coalition of the Willing for Free Ukraine.

In the days since Russia launched the large scale military escalation of its undeclared, eight year long, war of aggression against Ukraine, our world has changed profoundly – a change so profound, it will define our future.

As people across continents have been watching the devastation caused to peaceful Ukrainian towns and cities by the barbaric attacks of Russian aviation, missiles, artillery, and tanks, national governments around the world finally decided to take real action to help Ukraine defend itself.

Ukraine’s suffering has resonated around the globe because the brutality of Russia’s criminal actions has awakened all to the reality of the imploding rules-based international security order. And Ukraine’s fighting spirit has reminded the world that freedom is a cause worth sacrificing for.

Russia’s presidency over the United Nations Security Council, a body entrusted by the world’s nations with maintaining global peace, became an abhorrent symbol of the dysfunctional farce debilitating this institution.

Russia’s veto on the Security Council’s resolution condemning Moscow’s naked military aggression against Ukraine was the proverbial last straw that broke the camel’s back of the world’s patience with Vladimir Putin’s regime.

Moscow’s claims of acting in the “interest of the Ukrainian people” and acting in “self defence” while conducting indiscriminate air strikes on civilian areas in Ukraine, and committing various war crimes and crimes against humanity expose Putin’s Russia as a deranged, authoritarian, and criminal regime.

For eight years, Moscow has been spreading crude falsities about Ukraine. For eight years, the Kremlin’s industrial-scale propaganda machine devoted massive resources to dehumanise Ukrainians, and to undermine international support for the country.

They lie that there is “no separate Ukrainian nation” and that Ukraine is a “failed state”. But today, the whole world can see Ukraine’s power, its unity, and unbreakable will.

Moscow’s propaganda machine has been slandering Ukrainian by calling them “neo nazis” and “nationalist radicals”. It has been lying to the world about a “coup d’etat”, “civil war”, “separatists”, “persecution” or even “genocide” of “Russian speakers” in Ukraine. Moscow made fake claims that Ukrainians posed a “security threat to Russia”.

We have had enough of the Kremlin’s lies, delusions, threats, and aggression. We will not let the world be pulled down into the rabbit hole of Putin’s madness.

We welcome that the international community has finally garnered the courage to admit that the Kremlin’s deceptive propaganda fabrications are nothing but a poor cover up for Moscow’s villainous geopolitical strategy that will bring destruction to the entire world.

The recent resolution of the United Nations General Assembly, which was passed with overwhelming global support for Ukraine, recognised Russia as responsible for unjustified and unprovoked war of aggression against our nation.

The world has united to protect humanity’s most precious values of life, freedom, and dignity. Ukrainians feel the support of people across the globe, and they are are thankful from the bottom of their hearts.

The global show of solidarity with Ukraine inspires us to believe that the international community has made a massive leap forward in its readiness to stop the evil regime threatening world peace.

Putin’s Russia is an outlaw rogue mafia regime. It has aligned itself with the other most repressive regimes where human life is desecrated.

A giant on tow clay feet

We need to be clear eyed – Putin’s Russia is a giant on two clay feet made of hate and fear.

But Ukraine stands strong on the feet of love for freedom, and courage to defend it.

Ukraine cannot be broken. Ukrainians are not afraid of any Russian efforts to destroy its nation.

But Ukraine is fighting alone against an army which is many times bigger in number and military capability.

After giving up nuclear weapons in 1994 in exchange for the security guarantees of the world nuclear powers, Ukraine no longer possesses a deterrent to be able to properly respond to Russia’s armed attack.

Ukraine’s response is severely restrained because Russia is abusing its nuclear status for military advantage over Kyiv.

Ukraine is constrained to fighting on its own territory which makes it easy for Russia to launch missile attacks and aviation raids across 2,000 miles of Ukrainian border with Russia and Belarus without any risk of retaliation. Ukraine’s response against targets on Russian soil and Russia-occupied Crimea carries a risk of triggering Moscow’s use of tactical nuclear weapons.

Ukraine’s military disadvantage needs to be repaired by adequate military assistance from the international community to set adequate deterrents for Russia. Without setting such deterrents, the whole world stands defenceless to further Russian nuclear blackmail.

But it does not end there. Ukraine’s fight is more than a David and Goliath story. It is the story of David versus an evil Goliath that has no moral limits on its evil actions.

Besides Russia’s military advantage, its army resorts to war crimes, crimes against humanity, and terrorist tactics to gain additional advantage. The Russian army is deliberately and indiscriminately attacking Ukrainian civilian areas and critical infrastructure. It is endangering and capturing Ukrainian civilian nuclear power infrastructure for the purpose of nuclear blackmail.

The world cannot stop such criminal tactics by diplomacy or sanctions alone.

The world must understand that Russia’s ultimate goal is the complete and total destruction of Ukraine and the Ukrainian people.

That is why we, as Ukrainians of different nationalities, call on the nations of the world of good will to stand arm-in-arm with Ukraine in defending against the evil giant.

We call for the creation of the Coalition of the Willing for Free Ukraine to stop the Russian regime from plunging the world into the chaos of destruction. First and foremost, we call on the governments of the United States, the United Kingdom, and France to honour their pledges to Ukraine to protect it from the nuclear threat.

Beyond that, we call on the governments of the world to impose a complete economic embargo on Russia, including any “oil and gas for food” programme.

We call to provide Kyiv with all military means necessary to repress and repel Russian aggression so Ukraine can not just defend itself, but defeat Russia and win the war. Kyiv needs anti-missile defence systems, aircraft, and other lethal weapons.

We also call on the governments to join efforts of establishing a special United Nations International Criminal tribunal for Russia’s war on Ukraine to bring Putin and his criminal cabal to justice for their atrocities in Ukraine. Russian society should know that participating in Putin’s destruction of Ukraine will not go without punishment.

With the help of every nation prepared to defend the values of freedom and democracy, we can topple the evil giant. We must topple it to honour the memory of those who perished at the hands of the Russian criminal regime, for the sake of those suffering from Russia’s war today, and to protect the future of new generations around the world.

This article was co-authored by Ariana Gic, a political and legal analyst, and director of the Direct Initiative International Centre for Ukraine, and Alexandra Chalupa, an American political hybrid warfare expert and human rights and democracy advocate.

Roman Sohn is a legal expert and chairman of the Direct Initiative International Centre for Ukraine.

Ukraine should prepare to be disappointed
In Kazakhstan, the president failed in his supreme duty of upholding the constitution
Comment