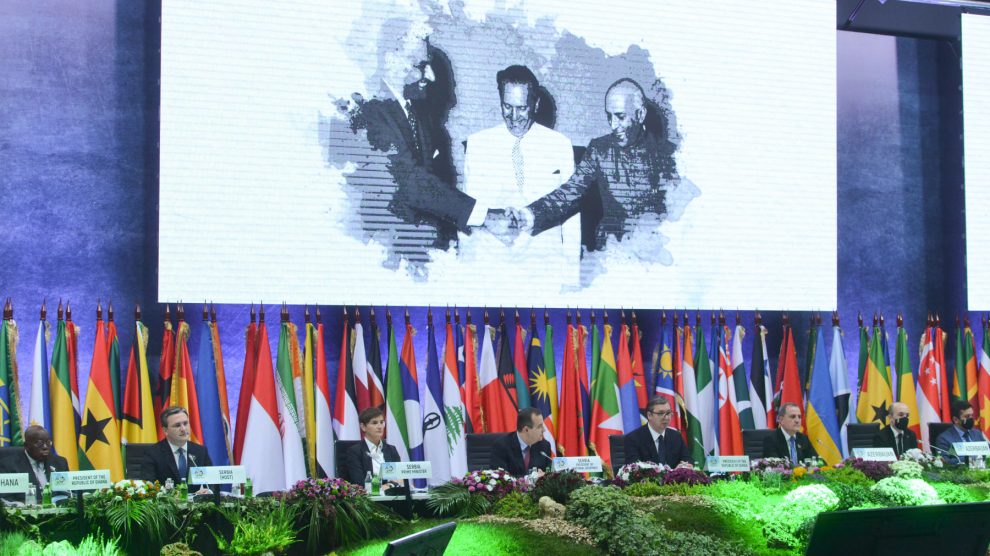 The Non-Aligned Movement is alive and kicking and has just celebrated its 60th anniversary. But what role does it now play? And why is Russia taking an interest?

Sixty years ago, Belgrade – then the capital of Yugoslavia – played host to some of the men and women who had spent much of their lives fighting for independence against imperial powers (primarily Britain).

Not all went on to be great leaders of their respective countries. Some would turn out to be utter rogues, while others were ousted by bloody rivals shortly after securing independence.

The reason for their trip to Belgrade in 1961 was to attend the first meeting of heads of state of the Non-Aligned Movement (NAM), a project dear to Yugoslavia’s leader Josip Tito, who – legend has it – was in 1950 the first to use the term “non-aligned” when he refused to take sides at the outbreak of the Korean War.

Sixty years on, and more than 30 years after the end of the Cold War, it often comes as a surprise to many that the movement still exists. But exist it does, and its birthday – held, fittingly, in Belgrade – drew 505 participants from 105 countries.

“We are proud that as a neutral country, on the way to the EU, we are working with our traditional friends from Asia, Africa, the Pacific, Latin America,” said Serbian President Aleksandar Vučić at the event’s opening ceremony. “For these friends Belgrade, Serbia, the former Yugoslavia, have importance and essence. Our friendships in the North, South, East and West are our strength.”

But few, aside from those taking part, appear to have been impressed.

“It turned out to be a pretty sad event,” says Eric Gordy, a professor at the School of Slavonic and Eastern European Studies at University College London.

“It recalls a period when, for a number of reasons, Yugoslavia enjoyed a position of prestige and influence in the world well out of proportion to its size and importance.”

“But Serbia is not Yugoslavia, and a regime that embodies fear cannot attain the prestige and influence that Yugoslavia had.”

Indeed, unlike Yugoslavia, which was a key player in the movement’s heyday, Serbia is not even a full member, retaining only “observer” status.

Other “observers” include Bosnia and Herzegovina, Croatia, Montenegro and Ukraine. Azerbaijan and Belarus are Central and Eastern Europe’s only full members.

And yet Serbia has not been shy about promoting its Yugoslav heritage and links to the movement’s early days.

“It makes sense for Serbia to freeride on Yugoslavia’s legacy,” says Vladimir Gligorov, a senior research associate at the Vienna Institute for International Economic Studies (wiiw).

“And it makes sense for Croatia to contest that. It makes sense for Bosnia to keep some of the connections alive given that its foreign policy capacity is limited. And so on. But there are declining returns as there is no longer and movement to speak of.”

This year, in a somewhat ironic twist, Russia also took the opportunity to jump on the non-aligned bandwagon, by signing up as an observer. Russian Foreign Minister Sergei Lavrov was a conspicuous presence in Belgrade.

While more than a few analysts in Serbia wondered if this was yet another Russian ploy to gain new friends and influence people, according to Marko Savković of the Belgrade Fund for Political Excellence, Russia already has more than enough channels and ways of achieving that.

“But it is helpful to be present, NAM being an outlet to a significant part of the non-Western world. Remember, due to Covid-19 mass gatherings like these are still rare,” he tells Emerging Europe.

“The prominent role played by Russia indicates the degree to which the meeting, in fact, represented alignment, as well as a general lack of vision and powerlessness,” he says.

Leaders with an agenda

With contemporary geopolitics much different today than during the Cold War, the movement’s primary role appears to be allowing its leaders to advance their agendas.

Azerbaijan’s President Ilham Aliyev – the movement’s current chair – used the summit to accuse Armenia of “ethnic cleansing” in Nagorno-Karabakh, while the Republika Srpska’s Milorad Dodik took the opportunity to once again inveigh against the Office of the High Representative for Bosnia and Herzegovina.

But what was in it for Serbia, the host, apart from a chance to bask in the long-past glories of Yugoslavia?

According to Savković, it was mostly a chance to reaffirm bilateral relations with countries that refuse to recognise Kosovo.

“And business,” he adds, “evident from the fact that a defence industry fair was taking place simultaneously. Serbia already exports arms to several countries that participate and observe in NAM.”

Showboating and arms sales aside, does the NAM still have anything to offer members who might still believe in its original ideals of “expansion of freedom, and the terminating of the domination of one country over another”?

According to Zijad Bećirović of the Ljubljana-based think tank IFIMES, there are indeed opportunities that members can take advantage of.

“There is large potential for cooperation,” he says. “In addition to political cooperation there are opportunities to renew economic, cultural, and scientific exchanges.”

But as he concludes, nobody should get carried away.

“Let’s not forget that once upon a time students from NAM countries studied in Yugoslavia en masse. Today the number is symbolic.”

The curious case of Kaliningrad: Elsewhere in emerging Europe
Is the Bayraktar TB2 a game changer for Ukraine’s defence?
Comment