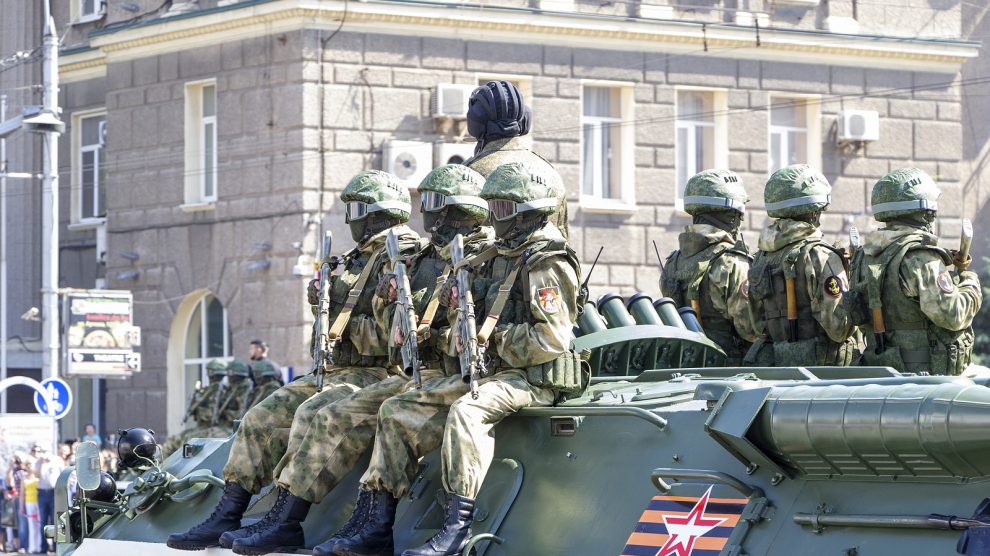 The Minsk agreements have for seven years failed to prevent fighting in eastern Ukraine. The idea, floated by Emmanuel Macron, that they could now form the basis of a solution looks like little more than a flight of French fancy.

French President Emmanuel Macron said on February 8 that the leaders of both Russia and Ukraine had committed to honouring the so-called Minsk agreements, and that he was working with German Chancellor Olaf Scholz to fully implement the agreements in order to defuse ongoing tensions between Kyiv and Moscow.

Russia has in recent weeks deployed an estimated 140,000 soldiers along Ukraine’s borders, although the Kremlin has continually denied that it is planning an invasion.

Macron was speaking in Kyiv after meeting with his Ukrainian counterpart Volodymyr Zelensky. The previous day, Macron had met with Vladimir Putin in Moscow.

“The solution of the Ukraine question can be only political, and the basis of the solution can only be the Minsk agreements,” Macron said.

What are the Minsk agreements?

In February 2014, taking advantage of the chaos in Ukraine that followed a turbulent period of protests prompted by then-president Viktor Yanukovych’s refusal to sign a free trade agreement with the EU in favour of closer ties with Moscow, Russia annexed Ukraine’s Crimean peninsula.

Gunmen with no insignia on their uniforms seized government buildings, set up security checkpoints along the strip connecting the peninsula with mainland Ukraine, and took control of two Crimean airports: effectively cutting off Crimea from the rest of the country. In March 2014, Crimeans then voted to incorporate the region into Russia, in a sham referendum that was neither free nor fair.

Later in March 2014, Russia sent special forces and mercenaries into the Donbas region in the east of Ukraine to organise an anti-Kyiv armed uprising. They seized large parts of the region (much of which was later recaptured by Ukrainian forces) but held on to the two cities of Luhansk and Donetsk, around which two rump statelets, the Luhansk People’s Republic and the Donetsk People’s Republic, were created. As in Crimea, both would soon after vote in flawed referenda in favour of independence from Ukraine.

Fighting in the east of Ukraine continued, however, until ceasefire was signed between Ukraine and the Russian-backed separatists in Minsk, the capital of Belarus, in September 2014.

But this agreement, known as Minsk I, soon broke down. By January 2015, full-scale fighting had broken out again. In February 2015, German Chancellor Angela Merkel and French President François Hollande brokered a new ceasefire, known as Minsk II.

The Minsk II deal sets out a series of 13 military and political steps that remain largely unimplemented.

Most importantly, it calls for the withdrawal of all foreign armed formations and military equipment from the two disputed regions of Donetsk and Luhansk, something which Ukraine insists refers to forces from Russia.

Moscow, however, denies it has any forces in either region.

In exchange for the withdrawal, Minsk II lays out a formula to reintegrate the two separatist regions into Ukraine, but on terms that would give them a great deal of autonomy. An election would decide exactly how Donetsk and Luhansk would be governed, an election Russia wants organised before Ukrainian control is restored.

The agreements make no mention of the status of Crimea.

Given that Ukraine and Russia interpret almost every point of the agreements differently, it is no surprise that they have done little to end the conflict in Donbas: while the line of contact remains relatively stable, infringements of the ceasefire are common and at least 10,000 people have been killed in fighting since Minsk II was signed.

The idea that the Minsk agreements could now form the basis of a solution to the current crisis looks like little more than a flight of French fancy.

Photo: Forces of the separatist Donetsk People’s Republic parade through the streets of Donetsk in August 2021.