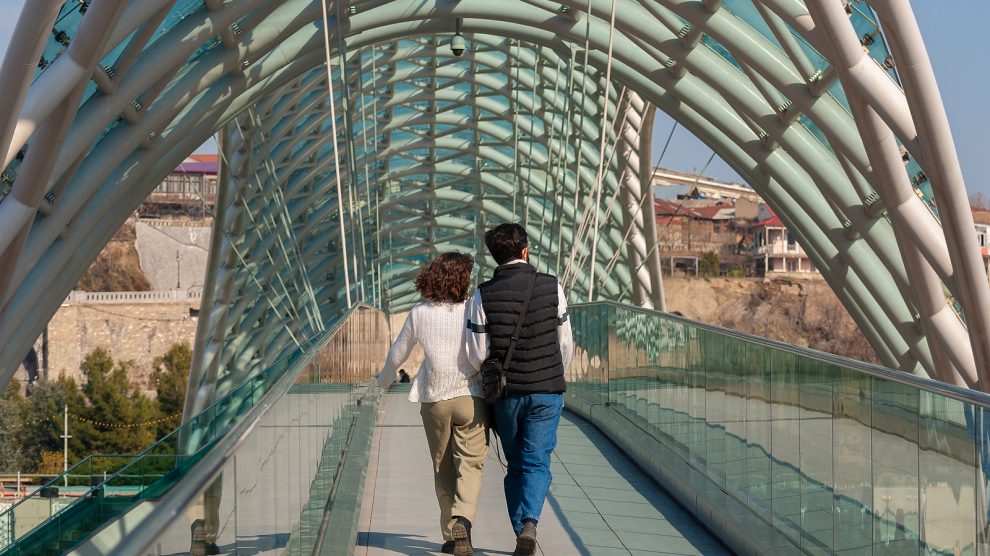 Tbilisi is hell-bent on winning the hearts and minds of those at the helm in Brussels, albeit at the expense of parting ways with deep-rooted conservative ideals.

Georgia is a poster child for the limitless heights sovereign states can set out to scale upon decoupling from a totalitarian bloc.

It is one of the few ex-Soviet republics to have embraced occidentalism lock, stock and barrel – so much so that even the old guard is all but devoid of any nostalgic sentiments towards the “glory days” behind the Iron Curtain.

Its bustling capital has all the makings of a contemporary European city – from ornately- decorated bistros straddling cobblestoned alleyways to eclectic architecture and lush green spaces which abound every nook and cranny of Tbilisi. Superficialities aside, Georgia’s free-spirited youth exude an unmistakable aura of buoyancy and make no bones of their affinity for the West.

Lithuania, Latvia and Estonia routinely come to mind as exemplars of post-communist success stories owing to full-fledged EU membership. Admittedly, the remarkable civic transformation the Baltic trio have undergone since independence places them on par with neighbouring Scandinavia insofar as quality of life, human development and the ease of doing business are concerned.

That said, the aforementioned countries’ nationhood is somewhat compromised by their beleaguered yet sizable Russian-speaking minority, which lives as a fifth column and sympathises fervently with Moscow. This phenomenon has not only given rise to acute social discord, but also fomented a pool of potential spoilers whose split allegiances render eclipsing the Kremlin’s orbit all the more elusive.

Although there is relatively greater unanimity among its three-million strong population with respect to geostrategic interests, Georgia’s economy has fared unsatisfactorily even by the modest standards of a middle-income nation. High levels of public debt, double-digit unemployment and a measly national GDP per capita less than half that of Bulgaria – the EU’s poorest member state – paint a bleak picture for any aspirant keen on making the cut.

Indeed, one could argue that the recent decision to deny Georgia EU candidate status was attributable to economic considerations above all else. With a median monthly salary of just 400 US dollars, there is an apprehension that uncontrolled emigration would ensue after joining the bloc. From the standpoint of a well-educated and multilingual workforce, profiting from freedom of movement to triple or even quadruple their earning potential is a no-brainer.

A victim of geography

One the one hand, Georgia boasts an ostensibly enviable location – situated within equidistant proximity of the Mediterranean, Asia Minor and the Middle East. The likes of Dubai, Athens, Tehran and Istanbul are a less than three hours away by air. Both Tbilisi as well as the up-and-coming coastline gem Batumi are fast expanding their network of flights to establish direct routes with most aviation hubs in the vicinity.

Nevertheless, the political scene in the Caucasus remains highly volatile due to a long-standing territorial dispute with the Russian Federation that could escalate at any given moment. Georgia has historically fallen prey to a plethora of invaders – among whom were the Mongols, the Persians, the Greeks and the Romans. The aesthetic diversity of its inhabitants is a consequence of their nation’s chequered past, which also moulded them into a fiercely independent ethnic group.

Despite the intrinsic sense of patriotism Georgian citizens embody, they have closed ranks in pursuit of European integration. Being detached from the mainland, however, does not help their cause and has proven a major handicap. The extension of visa-free travel back in 2017 is not to be mistaken for a precursor to eventual EU accession. A number of well-intentioned visitors from Georgia have been arbitrarily refused entry to the Schengen zone, which defeats the purpose of this privilege to a certain degree.

Moreover, the inertia demonstrated by Europe during the 2008 Russo-Georgian war was down to the implausibility of any bloodshed permeating to their borders. Georgia is simply not of as much strategic significance to the Europeans as gas-laden Azerbaijan next door, or the Gulf States for that matter, amid a looming energy crisis.

Meanwhile, the precarity of sea-borne supply chain lines from Georgia to the continent proper as the Ukraine conflict rages on could severely impede bilateral trade carried out at present.

On that note, the EU’s similarly lacklustre response to the tragic events unfolding at its doorstep is a wake-up call for Georgian leadership, whose foreign and domestic policy alike is wholly centered upon pandering to the whims and fancies of Brussels. Having been privy to how ordinary Ukrainians were essentially left high and dry in their hour of need by the so-called “European family” should offer Tbilisi some serious food for thought going forward.

Any prospective newcomer to the union also needs to take heed of an unwritten pecking order they will ultimately feature in. It is worth recalling that Brexit was, by and large, the outcome of excessive fear-mongering over mass migration from the East. Bulgarian and Romanian nationals, in particular, were pervasively depicted as welfare moochers by the leave campaign – prior to whom UK-based Poles were scapegoated and singled out along the same lines.

Playing to its strengths

The farfetched prospect of joining the EU anytime soon ought to be looked upon as a blessing in disguise, not least because forgoing national sovereignty is part and parcel of being absorbed into a superstate.

As things stand, the Georgian government has leeway to chart out its own roadmap rather than one which forcibly aligns with an external body in dire straits. Fuel rationing is already underway in certain parts of Western Europe. If anything, this winter will be a litmus test for pan-continental solidarity and whether their monolithic template can continue to hold water.

To that end, it makes perfect sense for Georgia to hedge its bets instead of succumbing to excessive eurocentrism. Wealthy investors from non-EU jurisdictions take comfort in the extent to which rule of law is enforced across the country and red tape has been done away with altogether. A pro-business environment reigns supreme, with attractive fiscal incentives and outreach to key markets drawing in entrepreneurs as well as digital nomads from all corners of the globe.

Georgia is not just deemed a safe bet in the eyes of foreign patrons, but increasingly by its own people who add significant impetus to an already flourishing start-up ecosystem. The combination of generous state-backed funding coupled with smoothly transitioning to a free-market economy wherein company founders can let their imagination run wild have helped galvanise this innovation drive. At the same time, extensive travel has instilled a sense of wordiness in the younger generation that can only be acquired through cross-cultural exposure and been equally conducive to harnessing new ideas.

Tourism is yet another one of the Caucasian nation’s strong suits, renowned for its mouth-watering cuisine and exquisite natural landscapes. The sector has witnessed exponential growth in inbound arrivals from the GCC, Levant and CIS region ever since entry requirements were unilaterally liberalised back in 2015. While there is no shortage of pull factors to lure vacationers all year round, Georgia’s biggest selling point happens to be the bona fide hospitality of its locals.

Guests frequenting Georgia are not just made to feel at home during their trip, but also deeply immersed in its millennia-old heritage. Natives take pride in imparting their rich customs with outsiders, who cannot help but be overwhelmed by such a fascinating and eye-opening experience.

While Georgia’s staunch support for a fellow victim of Russian aggression should come as no real surprise, it is admirable that most Georgians do not conflate virtue signalling over Ukraine with outright Russophobia at a time like this.

The fact that citizens of Russia are still flocking to Tbilisi bears testament to how aptly their hosts are able to put aside political differences and keep their demeanour intact, irrespective of the bitter memories this war invokes.

Georgia has, thus far, proven itself adept at standing on its own two feet and put itself on the map for all the right reasons. Incidentally, an heir of nonchalance vis-a-vis becoming a part of the European Union may serve to strengthen their negotiating hand as opposed to undermining it.

Amid an ongoing war, sport returns to Ukraine 
Why Georgians are fighting in Ukraine
Comment