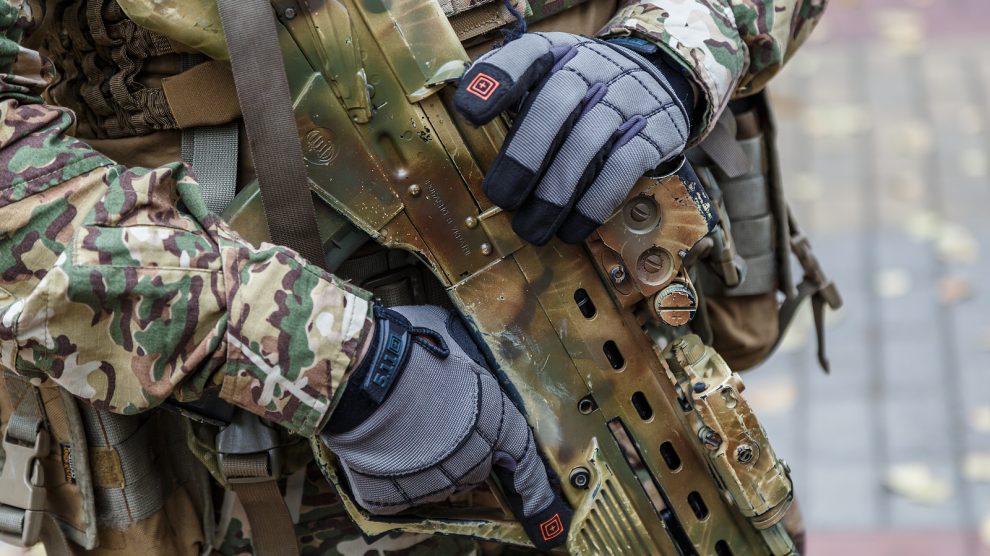 Despite the difficulties placed in their way by the Georgian government, many Georgian volunteers have joined the fight against Russia in Ukraine. They include former Georgian soldiers, poets, bloggers, and even two former ministers of defence.

When the Soviet Union collapsed, the newly created independent republics sought to win stable and reliable allies in the new, post-bipolar world.

During that time a strategic partnership between Georgia and Ukraine started to emerge: both linked their future through a common vision of European and trans-Atlantic cooperation, especially during the mandates of presidents Viktor Yushchenko in Ukraine (2005–10) and Mikheil Saakashvili in Georgia (2004–13).

At the same time, Russia never wanted to cut ties with the former Soviet republics definitively, especially Ukraine and Georgia. From the very beginning it sustained several conflicts in Georgia in the regions of Abkhazia (in the early 1990s) and Tskhinvali (in 2008). As a result, Russo-Georgian relations suffered greatly.

When in spring 2014 the Russian army occupied Ukraine’s Crimean peninsula and war broke out in Donbas, the response of Georgia’s leaders followed their declared “non-frustration policy towards Russia”, i.e. silence.

The reaction of Georgian citizens and, more specifically, war veterans, was radically different. One of the consequences was the formation of the Georgian National Legion in April 2014, which to this day remains the most visible Georgian presence among foreign fighters in Ukraine.

The Georgian National Legion is a paramilitary unit of around 1,000 war-hardened soldiers. It has regularly participated in the war in Donbas since 2014, and increased its commitment to Ukraine’s struggle when Russia launched its full-scale invasion earlier this year. It was present at the battles for the Antonov airport, Kyiv, Hostomel, Volnovakha, Irpin, Izium, Rubizhne, Kharkiv and the siege of Mariupol.

The founder and commander of the Georgian National Legion, Mamuka Mamulashvili, has been a sworn enemy of the Russian army since the early 1990s.

Mamulashvili’s first war experience against Russia was in Abkhazia, a Kremlin-backed Georgian breakaway republic, in 1992-93, when he was just 14 years old and fought alongside his father.

He then fought Russia during the first Chechen war (1994–96) and throughout the five-day Tskhinvali war in August 2008. The conflict in Donbas became his fourth direct confrontation with the Kremlin on the battlefield, a sound commitment to the defense of the oppressed, and, as he argues, rather than out of hate for Russians, he is fighting out of gratitude for Ukrainian assistance during the war in Abkhazia and out of his love for Ukraine.

Nevertheless, he admits that most of his men were motivated to serve in the Legion by their active rejection of Russian power politics and their fear that should the Kremlin succeeded in Ukraine, its attention would once again turn toward the Caucasus. This, Mamulashvili claims, would immediately threaten the existence of Georgia as an independent state.

“Georgia’s fate is today being decided in Ukraine. We are fighting both for Ukraine and Georgia’s future. If Ukraine falls, the very existence of Georgia will be under serious threat,” says Mamulashvili.

The fight against Russian imperialism

For Mamulashvili, Ukraine’s Euromaidan Revolution in late 2013 to early 2014 was the continuation of the same fight against Russian imperialism.

In August 2008, Russia launched a war against Georgia in Tskhinvali. The Russian-planned military campaign lasted five days until the parties reached a preliminary ceasefire agreement.

Georgians fought and stopped Russia. Unfortunately, many in the West blamed Georgia (and President Saakashvili in particular) for provoking Russia. The international reaction to Russia’s military campaign in Georgia was silent. Moreover, EU leaders called for a ceasefire that appeared to favour Russian interests, while the Barack Obama administration rushed to push the “reset” button with the Kremlin.

The Western reluctance in 2008 to grant Georgia a NATO Membership Action Plan paved the way for Moscow to establish its own red lines by responding to Georgia’s Euro-Atlantic aspirations with military might. The lack of a Western response and later attempts to “reset” relations with Moscow were interpreted by Vladimir Putin  as a sign of weakness, giving Moscow the confidence to annex Crimea in 2014.

Right after the beginning of the Georgian Legion’s participation in Donbas, the Georgian government considered a bill at parliament that would introduce tough penalties for Georgian citizens who “fight as part of illegal armed groups abroad” – a move that was directly addressed at the Georgian heroes fighting in Ukraine.

The government’s pro-Russian stance was more transparent than ever. This is why it was later rephrased by the then Georgian Interior Minister Levan Izoria, who stated that the bill would not apply to those who are “legally” fighting on the Ukrainian side.

The declaration was therefore ambiguous, as the Georgian Legion at that stage had no official status. It was only in February 2016 when the Georgian Legion was formally integrated into the 25th mechanised infantry battalion of the Ukrainian armed forces. In January 2018 the Legion was transferred to another brigade and fought in eastern Ukraine under the command of the 54th mechanised brigade.

On February 24, 2022 Russia unleashed a full-scale war in Ukraine. Putin and his cronies forecast that a “powerful and undefeatable” Russian army would takeover Ukraine without much effort, Ukraine’s government would immediately collapse or flee, a state of affairs that would leave a vacuum that could quickly be filled by Moscow-appointed officials.

On March 11, in a televised interview, Russia’s defence minister, Sergei Shoigu, (one of Putin’s closest allies) said: “Vladimir Vladimirovich, everything is going according to the plan. We report this to you every day this week.” However, Putin’s blitzkrieg strategy did not work. The Georgian Legion fought fiercely, shoulder to shoulder with the Ukrainian armed forces, defending both Ukraine and Georgia against a common enemy.

In contrast, the government of Georgia’s reaction to the war in Ukraine was ambivalent. As early as February 25 the prime minister, Irakli Garibashvili, refused to impose curbs on the country’s northern neighbour, angering the population, while condemning the aggression in a pusillanimous manner.

When many European and pro-Western countries introduced sanctions against Russia, Georgia did not. “I want to state clearly and unambiguously, considering our national interests and interests of the people, Georgia does not plan to participate in financial and economic sanctions, as this would only damage our country and populace more,” Garibashvili said.

Ukraine, in response, recalled its ambassador to Georgia, over what President Volodymyr Zelensky called the Georgian government’s “immoral position” regarding the Russian invasion, in addition to Georgia’s decision to block a charter flight scheduled to bring Georgian volunteer fighters to Ukraine.

While the official response to Russia’s war in Ukraine has been laidback, the public has unequivocally supported Ukraine, doing almost anything to help in its fight against Russia.

Despite the difficulties placed in their way by the Georgian government, many Georgian volunteers have since left the country to join the fight in Ukraine by taking regular flights from neighbouring countries, and then crossing the border by land.

Let us first be responsible

Georgians feel a particular involvement in the war in Ukraine, and some are putting their lives on the line for freedom and democracy. So far, at least nine Georgians have died fighting in Ukraine since the beginning of the war, which is likely the largest death toll among any foreign contingent fighting. The Georgian volunteers include former Georgian soldiers, poets, bloggers, and even two former ministers of defence.

As the war in Ukraine continues, its implications for the global security architecture has not yet been determined. However, one thing is certain: the stakes for Georgia are high. If Ukraine falls, Tbilisi could be the next target. The Georgian Legion, which has been the face of Georgian dignity, fighting arm to arm with Ukrainian people, must succeed in beating the Kremlin. A defeated Putin would not be expected to attack Georgia. But should he decide to do so with his last breath, Georgia has a more realistic chance of pushing back a Russia that has been previously defeated in Ukraine.

To sum up, every one of us has a responsibility. Those who ask Ukraine to surrender, in order to achieve a final peace, forget how history tends to repeat itself. The government of Georgia is de facto led by Putin’s proxies, imposing an alleged ethic of pacifist submission.

But it is just political opportunism, because in fact they aspire to take advantage of a possible cessation of violence to stay in power, thanks to the help provided by the Russian Federation once again.

However, what is at stake goes beyond their political careers and their need to survive on a living wage: civilians are being killed. A few Georgian soldiers are our contribution “to save civilisation”.

Winston Churchill defined wars as “between responsibility and votes”. To the government of Georgia I say: Let us first be responsible.

Nona Mamulashvili is a Georgian MP for the opposition United National Movement.