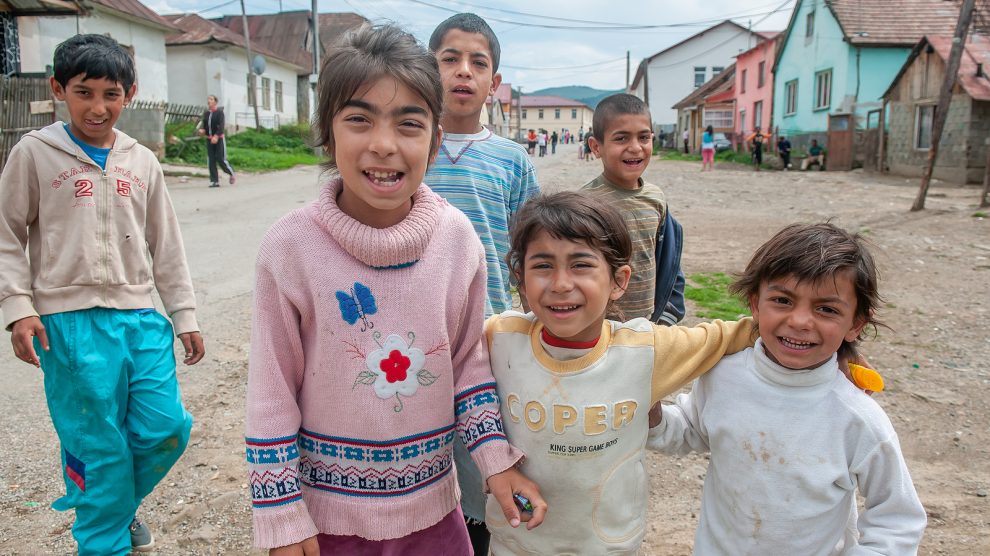 Community-level support for Roma across emerging Europe needs to be matched with the political will to ensure that the region’s most discriminated people are no longer marginalised by society.

And yet despite many campaigns across the emerging Europe region by NGOs, and despite the European Union’s inclusion initiatives, Romani people remain disproportionately poor, live in tough conditions, and are exposed to racist violence.

According to European Commission’s Fundamental Rights Agency around 80 per cent of Roma are at risk of poverty.

“Most countries do not collect data on ethnicity – but I can say that the majority of Roma, particularly in Central and Eastern Europe, live in poverty and segregation,” says Jonathan Lee from the European Roma Rights Centre (ERRC).

“Many of them live in conditions which I think the average European would not imagine exists in the developed world – completely cut off in segregated communities, denied access to basic services, in a cycle of discrimination and neglect which makes it almost impossible to get out of.”

Such conditions often breed generational poverty, according to Frédérique Halászová of the People in Need Slovakia organisation.

“We have to consider generational poverty, which constitutes an enormous obstacle in moving forward. If a child is born into generational poverty, its starting line will be incomparably worse than the one of a child from the majority. From this starting line many other obstacles unfold – access to education, living conditions, chances of employment, discrimination and so on,” she explains.

Instances of anti-Roma sentiment and violence are so common in the region that it’s impossible to comprehensively list them.

Additionally, the discrimination Roma face is multilayered and happens across institutional, political, and public domains.

These issues range from the extreme, like the attacks on Romani settlements that have happened in Ukraine over the last few years (that have left many injured and several dead) to the less visible types of discrimination in areas such as hiring and access to welfare.

Most of these issues remain largely invisible to the general population. Recently, there was much furore over whether or not the Polish national football team would “bend the knee” for BLM (Black Lives Matter, an US-based movement fighting racism against people of colour). They didn’t. But absent from the discussion were the people who live in large numbers across emerging Europe and who are its most discriminated minority — the Roma.

And it does beg the question — will we ever see a BLM for Roma in Europe?

The duality of invisibility and hypervisibility, first introduced by anti-racist scholars in the United States, applies very well to the position of Roma in emerging Europe. Invisible in settlements they live in, often without basic amenities such as electricity and running water, they are hypervisible when they attempt to engage with wider society. Anyone who’s ever ridden public transport around the region knows of the immediate shift in atmosphere when a Roma person enters the vehicle.

Because of this, the prevailing wisdom in many quarters in the region is that the Roma simply want to live as they do. But, as Mr Lee points out, this is far from the truth.

“Poverty and segregation are not part of Romani culture. It is a visible manifestation of the centuries of anti-gypsyism in Europe which have led to the Romani people being the most marginalised minority on the continent,” he tells Emerging Europe.

Centuries of antiziganism is about right. The roots of anti-Roma racism run deep. Until the mid-19th century, when slavery still existed in the territory of today’s Romania, most slaves were Roma.

Today, Romania’s Roma are no longer slaves, but that hasn’t done much to improve public opinion.

Last year, a video of an incident in which police went into a Romani settlement and physically abused several men made the rounds on social media. While there were some condemning what had happened, many online commentators doubled down on the racism, offering support to the police officers and saying that since these men were Roma they must have done something to deserve their ill-treatment.

This type of victim-blaming rhetoric is common across the region when it comes to the Roma community, and it doesn’t just come from social media. High profile politicians have regularly engaged in hate speech against Roma. Some on the right wing even use anti-Roma sentiments to drum up support for their organisations.

“The anti-Roma topic became the main point of identification of many political parties, three of which have ministers in the current [Bulgarian] government. Constantly, we observe public suggestions that the Roma are guilty for all the failures of the transition period,” says Donka Panayotova, chairperson of the Organisation Drom from Bulgaria.

Within this complicated landscape, Mr Lee points out that it’s naive to expect that a couple of decades of NGO, EU, and national government work on inclusion to erase and make better centuries of discrimination and hate.

“All of the money in the world will not cure racism if racism is not treated as the root cause of exclusion,” he says. “While we still have politicians in nearly every EU member state, neighbourhood country and enlargement country using anti-Roma rhetoric as a part of their political platforms to gain votes, how can we expect society to move away from the last acceptable form of racism when it’s so normalised at the highest level?”

“We never had the illusion that small NGOs with restricted financial resources could substitute the role of the government. In this sense, we believe the role of the Roma NGOs, including NGO Organisation Drom, is to test on a small scale different models for Roma participation in all spheres of social life; offer expertise; work with the community for the better involvement and convince the National Government to mobilise all of it’s institutional mechanisms for the implementation of the policies at national level,” she says.

But, as Osman Balić from the Serbia-based Romani League points out, there is often a lack of readiness on the part of governments to do the necessary work, at least in Serbia.

“There is a latent racism in the government institutions. It’s a political stance that doesn’t depend on elections or political leanings. Roma are considered a factor of disturbance in Serbia. Studies and research show that. Ethnic distance is the best evidence of this claim. It’s growing,” he says.

Covid-19 has exacerbated the problem.

The response to the pandemic in some emerging Europe countries has been extremely problematic. Reports of cutting off entire Romani settlements came from Bulgaria and Slovakia and were condemned by Amnesty International. These events were coupled with anti-Romani rhetoric calling their settlements sources of contagion.

“The effects of the pandemic on marginalised Roma communities are numerous. The problems are especially tough in the poorest segregated settlements which suffer from high levels of poverty, lack of access to running water and poor hygiene conditions. This increases the risk and exposure of its inhabitants to Covid-19. Many of the families have also lost even their small incomes and are not able to provide food and hygienic supplies,” says Ms Halászová.

As many school systems around the region moved to online teaching, Romani children were left behind once again, as many do not own the necessary equipment. And even if they did, those who live in cut off settlements which are essentially ghettos, don’t always have the best access to electricity.

According to a recent Reuters report from Hungary, the disease is now rampant among the estimated 700,000 people who live in the country. The situation is complicated by mistrust Romanies have for the government and for the health authorities. According to a study Reuters cites, only nine per cent of Roma in Hungary want the coronavirus jab.

“There is a healthy mistrust of state authorities, and medical authorities, by Roma in Hungary and the region. They have good reason not to trust them – usually the only interaction Romani people have with the state is negative,” explains Mr Lee.

As he further notes, the ERRC has received reports of ambulances not wanting to go into majority-Romani areas, and cases where Romani mothers were abused by staff when going to the hospitals to give birth.

Then there is the long and shameful history of forced sterilisation performed on Romani women. Again, according to the ERRC, such cases were reported as late as 2001 in Hungary and 2012 in Czechia.

“If your only experience of the state and medical personnel is terror, discrimination and demonisation – why would you trust them all of a sudden to treat you well now? Especially as during the Covid-19 pandemic they have done the exact opposite of this so far,” Mr Lee asks.

According to him, the only way to right these wrongs is to attempt to build trust through targeted public health information campaigns that involved Roma from the concept stage.

“Many Roma will not be able to access a vaccine even if they want one because of digital literacy problems and lack of state health insurance. This should have been foreseen by government policy makers long ago, and initiatives put in place to ensure all of the population are able to access the vaccine equally. Judging by the government’s track record so far in Hungary – and most other places in Europe – this seems unlikely,” he explains.

Despite all these challenges many Romani NGOs and other civil society organisations are working on strategies of inclusion and actions taken with the goal of mitigating some of the harms, even if just in the short term.

“People can get frustrated from the situation, because there seem to be no tangible major changes. But we see changes in all of the communities that we work with. We have children that go to high school – the first in their communities, parents that find and hold onto their first ever jobs, women who created their own groups in the community and even started to collectively help poorer families from neighbouring settlements. All of these small changes combined represent a significant positive development. Each change for the better counts,” says Ms Halászová.

Similarly, Ms Panayotova explains that Drom is one of the oldest NGOs in Bulgaria. Over time, they have deployed a model for school desegregation, which has been followed in other CEE countries.

“Thus, we estimate we supported over 4,000 Roma children, providing them access to quality education, and we have over 200 young Roma who have successfully graduated from colleges and universities in the country and abroad,” she says.

But, the government ended up not having the political will to carry these reforms through to the end. Had they done so, Ms Panayotova says the issue of school segregation could have been solved once and for all.

A history of successful organisation doesn’t seem to matter much in the Covid-19 landscape, however, as Drom is now on the verge of closing down.

Ultimately, there are no easy answers when it comes to how to solve a problem that is quite literally centuries old.

“The situation in the excluded Roma communities cannot be solved overnight. Social integration is a complex issue that requires patience and long-term attention,” concludes Ms Halászová.