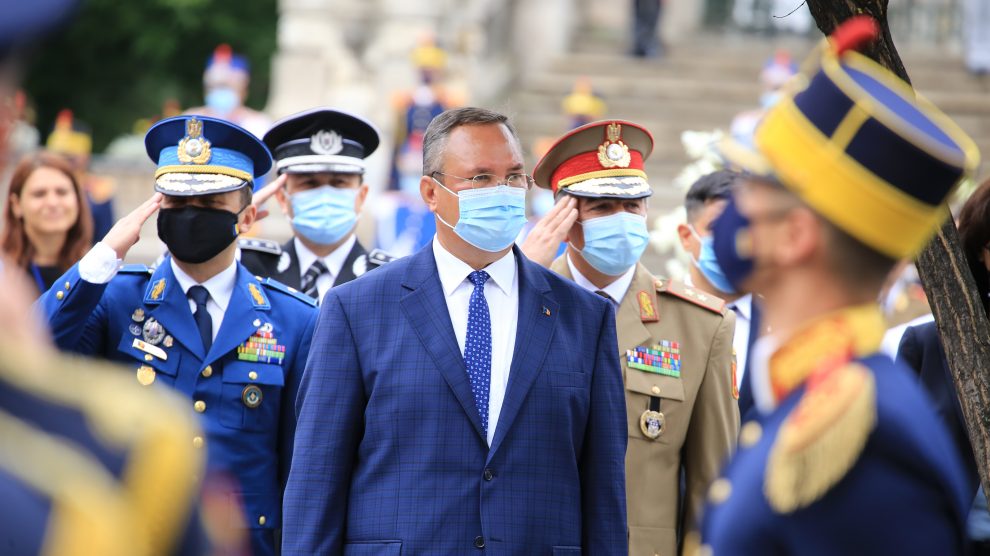 Romania’s President Klaus Iohannis nominated retired four-star army general Nicolae Ciucă as prime minister designate on Thursday, tasking him with forming a centrist government to end a month-long political stalemate. Ciucă, a member of the Liberal party, was briefly head of an interim government last year, and has served as defence minister since January. On Wednesday, Dacian Cioloș of the Save Romania Union (USR) failed to win parliamentary support from lawmakers for his proposed cabinet.

Germany’s top security official on Wednesday proposed introducing joint German-Polish patrols on the two countries’ border to help clamp down on illegal crossings into Germany by migrants arriving from Belarus, but said no one has any intention of closing the frontier. Authorities in Germany say about 4,500 such crossings have been registered since August. Many of them are people from Syria and Iraq who flew to Belarus in the hope of reaching the European Union via Poland.

Poland’s Prime Minister Mateusz Morawiecki meanwhile on Tuesday lashed out at EU leaders during a session of the European Parliament, telling Ursula von der Leyen “we will not be blackmailed” after the European Commission president vowed to take action against Poland after the country’s top court ruled on October 7 that key parts of EU law were incompatible with the Polish constitution. During a tense debate in Strasbourg, Morawiecki claimed the European Court of Justice was responsible for a “creeping revolution” that threatened to undermine Poland’s sovereignty.

A political outsider with no party affiliation, Péter Márki-Zay, the mayor of Hódmezővásárhely, a small town in southern Hungary, won a primary election to choose the Hungarian opposition’s prime ministerial candidate ahead of a parliamentary ballot next year. Márki-Zay won a resounding victory in a second round of primaries over his centre-left opponent, Klára Dobrev. Dobrev immediately congratulated Márki-Zay, as did representatives of all six parties from across the political spectrum which make up Hungary’s united opposition.

Taiwanese Foreign Minister Joseph Wu and a business delegation will begin a visit to Prague on Saturday, the Czech Taiwanese Business Chamber said on Tuesday, a fresh indication of warm relations between the European Union country and the self-ruled island. Besides Czechia, the Taiwanese delegation is scheduled to visit neighbouring Slovakia, and Lithuania. The visit is likely to trigger a strong reaction from China, which claims democratic Taiwan as its own territory.

Prague-based Rossum has announced 100 million US dollars in Series A funding, one of the largest-ever Series A rounds to come out of Eastern Europe. The Czech start-up, founded in 2016 by three PhD drop-outs, is aiming to re-invent the way businesses send documents to each other. “We believe that what RPA [robotic process automation] did for internal company processes really needs to be done for business-to-business communication,” said Rossum co-founder and chief executive Tomas Gogar.

Moldova has reached a provisional loan agreement with the International Monetary Fund (IMF) worth about 564 million US dollars over 40 months. Prime Minister Natalia Gavrilița said on Thursday that a first tranche of 81 million US dollars could be received from the Washington-based lender by the end of this year once IMF management and its board of directors meet in December.

Ukraine has enough gas in reserve to get through the winter period and expects that foreign companies would not re-export the gas they keep in Ukrainian underground storage, the head of Ukraine’s energy firm Naftogaz said on Wednesday. “Gas that belongs to non-residents does not mean that it cannot be used (domestically) during the heating season,” Yuriy Vitrenko told reporters.

US Secretary of Defence Lloyd Austin meanwhile said on Tuesday Russia was the obstacle to peace in eastern Ukraine and had no right to veto Ukraine’s aspirations to join NATO. During a visit to Kyiv, at a time when Russia’s relations with the West are at post-Cold War lows, Austin said Ukraine must be able to decide its own foreign policy and warned Moscow to halt cyberattacks against the United States and its allies.

Former Georgian President Mikheil Saakashvili, who has been on a hunger strike in prison for nearly three weeks, has consented to medical intervention while vowing to continue his protest. Saakashvili’s lawyer, Dito Sadzaglishvili, read out a letter from his client to reporters on October 20, in which Saakashvili said he was “ready to die” for his cause. Saakashvili was arrested on October 1 hours after he announced he had returned to Georgia following an eight-year absence. Saakashvili has said that the arrest was politically motivated.

Azerbaijan’s State Security Service has detained several Shiite clerics, including a well known imam, as tensions with its southern neighbour Iran continue to fester. The clerics and their families themselves reported their detentions, while Azerbaijani officials have remained silent. In an October 19 Facebook live broadcast, cleric Ilgar Ibrahimoglu reported that law enforcement officers had come to his house. In his statement, he suggested his detention had a political underpinning.

Latvia went back into lockdown on Thursday due to the worsening coronavirus situation in the Baltic country where the vaccination rate is among the lowest in the European Union. Following an emergency government meeting late Monday, Latvian Prime Minister Krisjanis Karins said that the lockdown – until November 15 – and accompanying drastic measures are needed as the pandemic continues to spread quickly, causing hospital wards to fill up with Covid-19 patients amid scarce health care resources.

Estonia’s chief financial regulator has said he wants to revoke all currently issued digital currency licenses and start again, effectively replacing the current regulatory regime with an entirely new structure. Matis Mäeker, head of Estonia’s Financial Intelligence Unit (FIU), said the state should consider scrapping regulation “to zero and start licensing all over again”, over concerns about the impact of the sector, and the risks of money laundering and other illegal activity.

The United States and the European Union on Wednesday expressed serious concerns about “divisive rhetoric” in Bosnia and Herzegovina and called on all parties to respect state institutions. The statement was released after lawmakers in Republika Srpska, the Serb-majority entity that makes up part of Bosnia and Herzegovina, passed a new law that potentially undermines the country’s constitution.

A joint venture between US engineer Bechtel and Turkish contractor Enka has agreed a 430 million euros loan guarantee with UK Export Finance (UKEF), the UK government’s export credit agency, to build a 112km 5G motorway in Serbia. The dual carriageway will link the central Serbian towns of Pojate and Preljina, and will connect to the north-south motorway running between Hungary and North Macedonia. It will also link with trans-European corridors X and XI, which connect Austria with Greece and Italy with Romania.

Montenegro is set to enjoy emerging Europe’s highest economic growth in 2021, according to the latest forecasts from the Vienna Institute for International Economic Studies (wiiw). Montenegro’s economy is forecast to grow by 8.4 per cent this year, although it is worth noting however that the country’s tourism-reliant economy suffered the region’s largest drop in GDP in 2020, of 15.3 per cent. That huge contraction means that pre-crisis levels will not be reached this year.

Albania on Wednesday announced that it will launch two satellites into space in 2022, in collaboration with California-based SpaceX. “Albania in orbit, incredible but real,” Albanian Prime Minister Edi Rama said in a video posted on his official social media, announcing that the country will launch two satellites into orbit in 2022. Albania’s first satellite named “Albania 1” will be sent into orbit in March 2022, followed by “Albania 2” in June.

Uzbekistan holds a presidential election on Sunday with incumbent Shavkat Mirziyoyev almost guaranteed to win a landslide against four stalking horses backed by parties loyal to the government. Two other potential candidates, linked to unregistered opposition parties, were prevented from running. Mirziyoyev is broadly popularly among voters, who appreciate his dynamic reforms – especially in the economy – that have transformed lives over his five years as president.

Kazakh President Qasym-Zhomart Toqaev has warned of repercussions for what he called “illegal public gatherings” ahead of protest rallies planned by exiled opposition politician Mukhtar Ablyazov. Domestic and international human rights groups have criticised Kazakhstan’s new law on mass gatherings adopted last year, saying it allows the government to maintain its tight control over peaceful assembly. Speaking at a session of parliament on Thursday, Toqaev downplayed those concerns while saying that “those who take part in illegal demonstrations will be prosecuted.”

The wife of a Turkmen activist being held in Turkey and facing deportation says the government in Ashgabat has handed Ankara a list of more than two dozen people it wants arrested and sent back for their activism. The Turkmen Helsinki Foundation (THF) said in a report that two more Turkmen opposition activists residing in Turkey – Ahmet Rahmanov and Kamil Abulov – had been detained, with Abulov’s wife saying police told her they had a list of 28 Turkmen citizens residing in Turkey whom the Turkmen government has asked Ankara to arrest and deport.