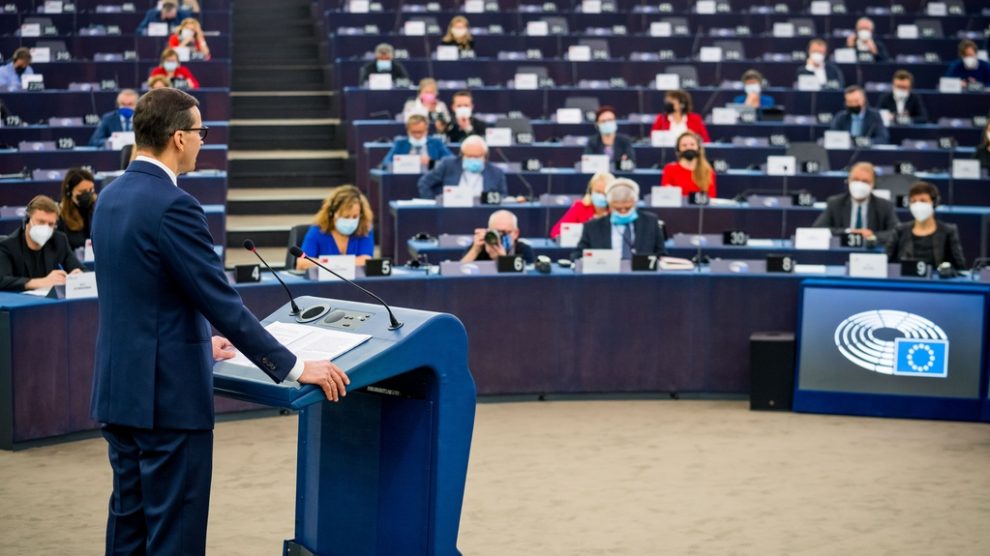 During a tense debate in the European Parliament, Mateusz Morawiecki claimed the European Court of Justice was responsible for a “creeping revolution” that threatened to undermine Poland’s sovereignty.

Poland’s Prime Minister Mateusz Morawiecki has lashed out at EU leaders during a session of the European Parliament, telling Ursula von der Leyen “we will not be blackmailed” after the European Commission president vowed to take action against Poland after the country’s top court ruled on October 7 that key parts of EU law were incompatible with the Polish constitution.

During a tense debate in the European Parliament in Strasbourg, Morawiecki claimed the European Court of Justice (ECJ) was responsible for a “creeping revolution” that threatened to undermine Poland’s sovereignty.

“EU competencies have clear boundaries, we must not remain silent when those boundaries are breached. So we are saying yes to European universalism, but we say no to European centralism,” said Morawiecki.

“The primacy of EU law does not extend to the constitutional system. The Polish constitution is the highest legal act in Poland; it stands above any other principle of law.”

Von der Leyen, who spoke before Morawiecki, said that the ruling of the Polish Constitutional Court had called into question the foundation of the EU and was a direct challenge to the unity of the European legal order.

“It is the first time that a court from a member state finds the EU treaties incompatible with a national constitution,” she continued. “We cannot and we will not allow our common values to be put at risk.”

She told parliament that the Commission would use all the tools at its disposal, including financial penalties to protect the EU budget against breaches to the rule of law, as well as the Article 7 procedure, which determines a serious breach of EU values.

She was backed by Anže Logar, Slovenia’s foreign minister (the country currently holds the rotating presidency of the Council of the EU), who told parliament that the primacy of EU law is the foundation of the EU and the basis for living together in a common European home.

“The Council is intensively debating the question of the rule of law and the presidency is committed to advancing Article 7 proceedings,” Logar said.

Poland’s ruling Law and Justice party (PiS) has been locked in battle with the European Commission, backed by the European Parliament, for the past five years over changes to the country’s judiciary, which Brussels claims has seen its independence undermined.

The Commission previously triggered Article 7 against Poland in 2018 but the procedure, which requires unanimity of all EU members, has remained blocked in the Council.

The parliament will vote on a resolution on October 21 that “deeply deplores the decision of the illegitimate ‘constitutional tribunal’ of October 7, 2021, as an attack on the European community of values and laws as a whole”.

The resolution is likely to pass, with the majority of MEPs increasingly angry at the Polish government’s attacks on the rule of law.

Terry Reintke, the vice president of the Greens/European Free Alliance, told Morawiecki that “the majority of Polish citizens disagrees with you. They want to live a strong Poland, part of a strong European Union based on rule of law and fundamental rights.”

Mister Morawiecki, the majority of Polish citizens disagrees with you.

They want to live a strong Poland, part of a strong European Union based on rule of law and fundamental rights.

Bring Poland back on the path of rule of law and implement the ECJ rulings.#Poland 🇵🇱🇪🇺 pic.twitter.com/flOnojjM8U

Siegfried Mureșan meanwhile, the vice chair of the European People’s party (EPP), said that Morawiecki had broken parliament’s rules by speaking for far longer than his allocated five minutes.

The Prime Minister of #Poland Mateusz #Morawiecki had 5 minutes speaking time allocated in the European Parliament.

He spoke for 33 minutes.

He broke the rule the moment he entered the European Parliament.
He broke a rule, he knew he broke it and did not care.

George Andreopoulos, a professor of Political Science and Criminal Justice at City University of New York said that Morawiecki had displayed “quite the attitude”.

“Poland is flouting EU law and yet he wants money from the Union. It is time for the EU to withhold recovery money!,” he tweeted.

Quite an attitude on the part of Mr. Morawiecki!
Poland is flouting EU law and yet he wants money from the Union. It is time for the EU to withhold recovery money!

Polish PM accuses EU of ‘blackmail’ in escalating dispute over rule of law https://t.co/Mfd1nSvzZT via @FRANCE24

According to the BBC’s Kasia Madera, Lithuania’s President Gitanas Nausėda has now offered to mediate between Poland and the EU, saying that linking issues about rule of law to funding risked inflicting “unimaginable harm to EU unity”.