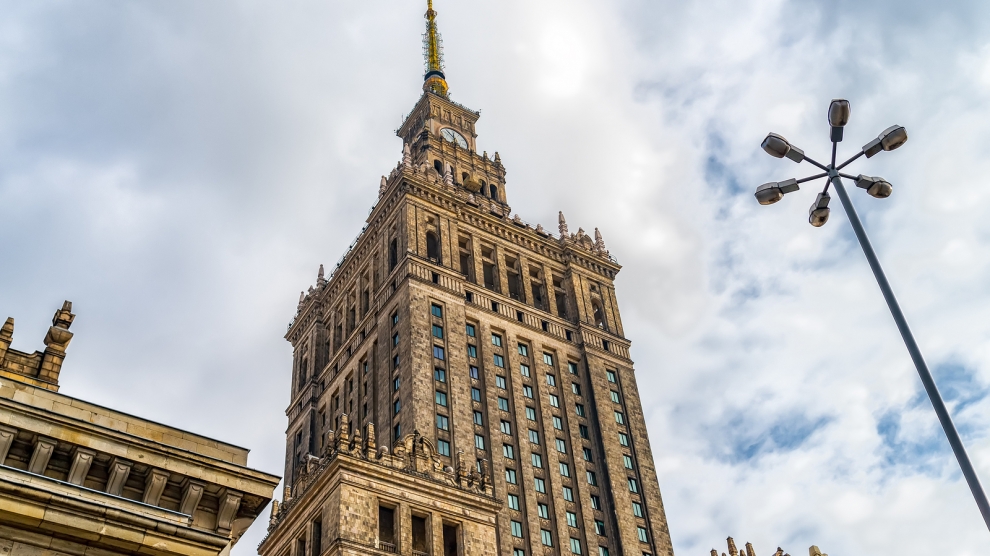 In 1987 Rupert Wolfe-Murray decided to travel overland from Scotland to Tibet. More than 30 years on, he has now written a book about his experience. In this extract, he leaves East Germany - which he hated - behind in order to move on to Poland, then still a communist country but one which, he offers, 'perhaps didn't take communism quite so seriously as the others.'

After East Germany, Poland was the second Communist country I visited and even before I got there I realised that it was very different. This might seem like stating the obvious, and today would sound ignorant, but I was struggling with the stereotype that all Eastern European countries were the same. But the people from Poland seemed to be different to those I had seen in East Berlin, where they seemed unfriendly and scared. I wondered if the East Germans took communism more seriously than the Poles?

My new Polish friends in the carriage were determined to have a blast; as soon as the journey started they whipped out bottles of vodka and a collapsible metal tumbler and poured a drink. The tumbler was handed to me as if I was part of the gang. There was no polite sipping as we might do in Scotland, it was down-in-one every time followed by a cheer and then a high-pitched discussion. Each round was preceded by a toast and all I could understand was: to you…to us…to our parents…to Poland…to Germany (I’m sure fallen comrades was in there somewhere too). The more I drank the better I seemed to understood their language. By the time we reached our destination we were blind drunk and I felt like we were blood brothers.

The other difference was the border guards; the man who came to check our passports at the Polish border didn’t seem to mind that we were so rowdy. He had white curly hair spurting out from under his cap, rather like horsehair bursting out of an old mattress. He had the tired, resigned air of a grandparent who knows he can’t control the kids and has given up trying. He seemed bored but friendly and didn’t check my passport or visa too carefully. This was very different from the East German border guards who examined my passport as if it was fake and looked at me as if I was a spy. They looked like they would enjoy torturing me.

Unlike many travellers I don’t like to research a country before visiting. If you arrive somewhere in a state of ignorance then everything is waiting to be discovered. And I would rather find out what’s worth visiting from local people rather than guidebooks. At university I barely studied the communist countries and so it made sense to head East, to learn about an unknown area. But I did know that Poland had once been erased from the map by their Russian, Austrian and Prussian neighbours, that the Nazis had given them a particularly hard time and that there were rumblings against communism in the port city of Gdansk. But I knew nothing of its geography and looking out of the train window it looked very flat. In fact, my impression of Poland is that it’s a big flat plain stretching into Russia, with a mountain range on its southern border.

Not everyone was as welcoming as my friends on the train. I went to change money at a big bank in the centre of Warsaw and came across the stereotypical communist woman; a big bully of a beast, oozing irritability. In those days you had to change about 20 US dollars a day, at the official exchange rate, for every day you were staying in Poland. This was a way of getting hard currency from tourists, as the official exchange rate was really low compared to what it was on the street (wherever you went men would hustle up to you and whisper change money, showing thick wads of zloty).

In fact, the official exchange rate was so artificial that you would get five times more for your dollar on the street than in the bank. It was frustrating to hand over hard-earned cash to an officious hag who gave a fraction of what you could get outside. And the problem with Polish money, or the money from any communist country for that matter, is that it was totally useless outside that particular country. Everyone in the region wanted US dollars and would grimace at the sight of Polish zloty, Czech crowns or Hungarian forints.

But there was a loophole: every time you exchanged money officially they would give you an elaborate handwritten receipt. I got chatting to a fluent English speaker in the queue at the bank and he told me: If you have any zloty left when you leave Poland, show your receipt at the border and they are obliged to exchange it at the original rate.

Maybe this would be an opportunity to get even with a system that seemed intent on cheating me out of my US dollars. We’re not talking about a lot of money here – I only stayed a week and had exchanged only 140 US dollars – but it was the principle that mattered. Getting ripped off is a humiliating experience, however small the amount is. When I left Poland I handed over a wad of zloty – that I had exchanged illegally – and had the exquisite pleasure of being given a stash of dollars by an official.

The woman who handed me those dollars could have been the same thickset peasant I had come across in the bank in Warsaw: surly, uncommunicative and wearing a peaked hat that looked as if it never left her greasy scalp. When I asked if I could change money I thought she would laugh dismissively or make a sarcastic comment. Citizens of these countries were strictly forbidden to possess hard currency – a law that didn’t seem to stop the money changers flashing their wads of cash on street corners. It reminded me of parental rules to stop kids drinking and smoking, rules that inspire them to do just that.

She remained expressionless and opened a drawer in a battered wooden table that stood between us. Inside the drawer was Aladdin’s cave. It was packed full of banknotes that were scattered all over the place. I saw English pounds, Swiss francs and Italian lira – and plenty of US dollars – and wondered why someone hadn’t robbed them of this treasure by now.

She rummaged among the notes, gathered up some dog-eared dollars, tossed them onto the table, closed the drawer and wandered off. She didn’t even glance at me as I gathered up the loot. The idea of grabbing what I could from that drawer crossed my mind. In one movement I would have enough cash to get me all the way to China; no need to find a job in Vienna or crawl home in disgrace.

But it was only a thought. These communist officials may have looked unfashionable but they were formidable – after all, they had managed to stop the use of illegal drugs in their territories, an impossibility in the west.

The butch woman who was now picking her teeth on the other side of the room looked like she had wrestled for Poland. Or had she been a champion weightlifter? Overweight people can sometimes move surprisingly fast and she would have caught up with me in seconds, coshed me on the back of the head and slung me in a shallow grave.

I stepped out of the ramshackle customs house and realised that I was the only person there. Where were all the cars?  I had taken the scenic route from the southern city of Krakow and from there followed a lonely road up into the Tatra Mountains, a road that led into Czechoslovakia. The border crossing seemed to be at the top of the mountains but I wasn’t sure as a thick blanket of mist had descended and all I could see was a bit of road and a curtain of pine trees. An excellent place for a murder I thought as I wandered into Czechoslovakia, a country that no longer exists.

Perhaps the most significant thing for me that day wasn’t my triumph over communism in the form of the money change scam, but the fact that I had started hitchhiking. It had been my intention to hitch hike from Scotland to China but I had made a pretty poor job of it so far. I had only been on trains, planes and buses. When I left Krakow I finally overcome my complacency and did what all hitchhikers have to do: get to the outskirts of town, find a good spot by the side of the road, stick out your thumb and wait for ages before getting a lift.

Nine Months in Tibet, and other books by Rupert Wolfe-Murray, can be bought via his personal website wolfemurray.com.