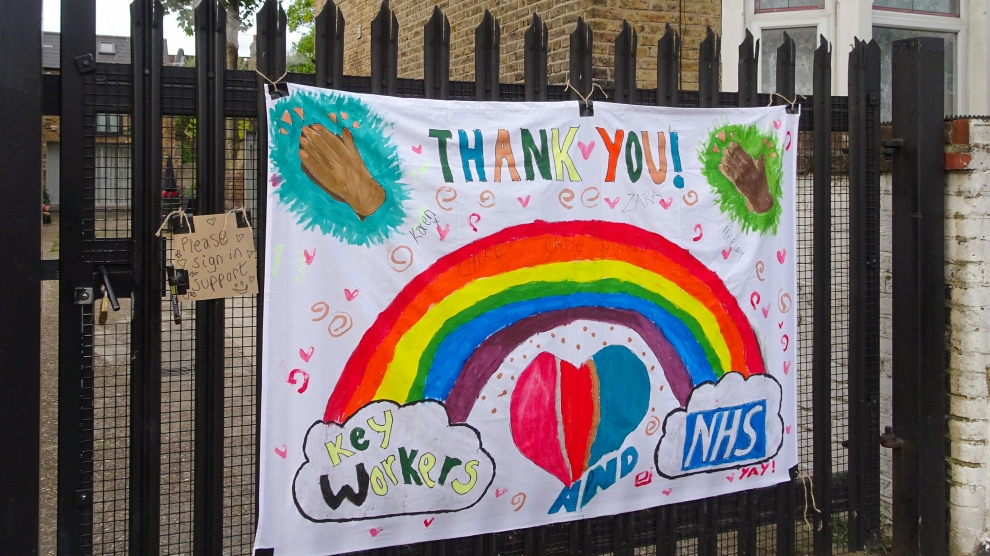 A new online exhibition curated by the UK Migration Museum highlights the role of migrant workers in the National Health Service (NHS), of which almost 21,000 are from emerging Europe.

“They know us, they take care of us, often they are the first and the last people that we see,” says the voice-over of the exhibition’s presentation video, animated by the young Russian artist Tribambuka. “Sometimes they know us more intimately than we know ourselves yet often we know very little about them.”

The exhibition aims to the explore stories of the migrants behind the surgical masks, migrants who make up a quarter of the total number of NHS workers. Many of these healthcare professionals have immigrated over past two decades arrived from Central and Eastern Europe, complementing other migrants from Britain’s former colonies, particularly in the Caribbean, Africa, and the Indian subcontinent.

Over the long history of the NHS, founded in 1948, many of these workers have faced barriers of various kinds, from being told that their education wasn’t up to scratch, that they weren’t trusted to undertake medical procedures, or that they should go back to where they came from.

The exhibition follows these personal journeys all the way back to the beginning, including that of Dr Stoll, who was born in Lithuania to Russian Jewish parents, and migrated to England in 1919. He remembers borrowing some money from his uncle to start his first practice in Chalk Farm, in the north of London, in 1935, and remains a strong supporter of the NHS – which he has served as a GP for more than 50 years.

In the context of post-Brexit Britain, the situation of migrants in the NHS is increasingly complex, and staff from emerging Europe are facing a paradox of messaging. They hear claps and cheers from porches and apartment windows, honouring their sacrifices during the Covid-19 pandemic, but also the screaming reproach of pro-leave Britons who deem them unwelcome.

Trinambuka also believes that central and eastern European migrants play a hugely important role in the NHS, and UK society more broadly. “Look at the nurses who looked after Boris Johnson when hospitalised with Coronavirus, that’s quite a vivid illustration of that,” she said, “And society in general – London wouldn’t be what it is without all these multicultural influences, its cultural landscape is shaped by it, and it’s sad to see it changing. Would these nurses and doctors that we clapped to every Thursday be able to stay here after Brexit?”

According to the exhibition’s curators, almost half of doctors and a third of nurses in the UK are non-British nationals, or come from a minority ethnic background. Of these, Poles account for the fourth largest non-British nationality serving the NHS, with almost 10,000 staff, followed by Romanians, Lithuanians and Hungarians.

Contrary to the propaganda put about by pro-Brexit campaigners, the majority of these workers are highly skilled, with the most common occupation being that of doctor.

At the height of the pandemic, the United Kingdom suffered up to 1,000 Covid-19 related deaths a day. NHS staff were exposed to unnecessary risk, particularly those of a migrant background, which as a result of structural discrimination put them at even higher risk of contracting the disease.

While this is particularly true of the UK’s BAME (Black, Asian and Minority Ethnic) workers, a similar fate is also suffered by the healthcare system’s Central and Eastern European staff.

Poles and Romanians in particular were singled out in the Brexit debate as putting a ‘strain’ on Britain’s health and social security system. In fact, as the exhibition makes quite clear (as did a recent House of Commons study), it is the NHS which relies on these migrants, not the migrants who rely on the NHS.

“The NHS would not be the beloved institution it is today without its international workers. But their crucial role is often ignored,” the exhibition reminds us, and in doing so humanises the thousands of NHS workers who suffered through the first wave of the pandemic.

In response to their treatment in the spring outbreak, over 1,000 doctors are planning to quit, disillusioned with the UK government’s repose to the pandemic and the mistreatment of workers, which again, disproportionately affected those of a non-UK background.

The exhibition looks at multiple personal experiences of workers during the pandemic, including that of Claudia Anghel, who arrived from Romania in 2013 to work as a midwife.

“Even during challenging times, midwifery is about life and joy. Of course, we are concerned, but we are also strong,” she says. “I still get up in the morning, put on my uniform and a bit of lipstick and go to work (although these days the masks we wear mean the lipstick doesn’t last long!)”.

“Migrants are not only safeguarding but transforming the nation,” says the exhibition video’s animator, Tribambuka. She explains that the video was important to her, as a Russian-born, London-based artist.

“We had very limited resources and time to get this project done, so I had to think of very simple but poignant solutions to get the message across, so I’ve chosen a mixed media collage as the canvas for the story, with some frame-by-frame highlights,” she says of her creative process.

The video is also voiced by former children’s laureate Michael Rosen, a descendant of Jewish parents and grandparents who escaped anti-Semitism from various parts of Eastern Europe. Mr Rosen himself came close to losing his life to the virus: NHS staff saved him.

Tribambuka says she hopes that the exhibition is a reminder as to how important migrants are to the NHS.  “Generally I feel that everyone is really grateful to NHS these days, but knowing who are these people and where they came from – is another story. And maybe the best way for people to feel connected – is to learn that story,” she says, ” I’m really honoured that I’ve been invited to contribute to this project. And generally the Migration Museum is doing great educational work – they are opening their doors again soon, and their main exhibition is also very poignant and informative. I contributed a suitcase I came with to London 10 years ago, being a migrant myself – with my story attached to it!”

A movie theatre like no other: Belgrade’s Novi Bioskop Zvezda
Five new movies from emerging Europe that are sweeping international festivals
Comment