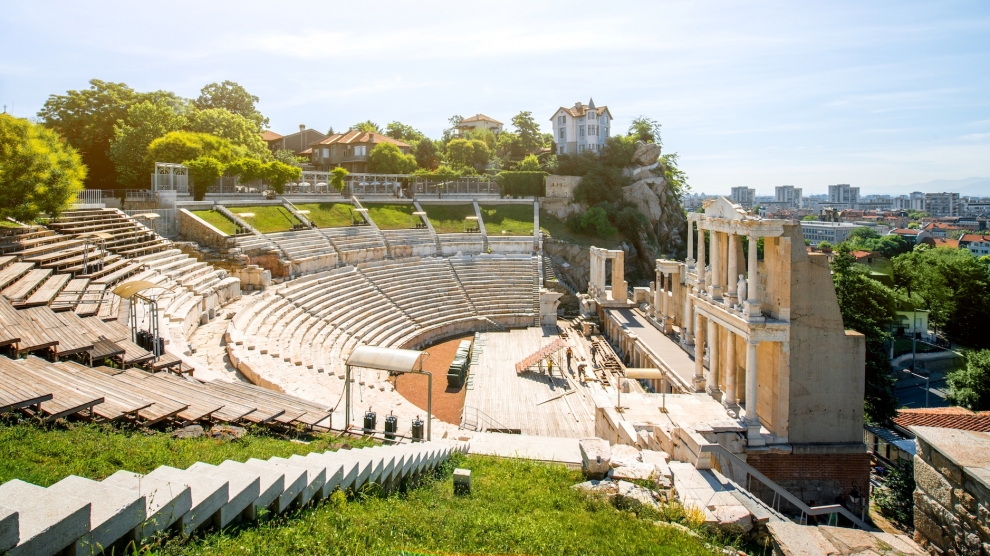 Bulgaria’s second-largest city is one of the oldest in Europe: people have lived here since at least 6000 BCE. It is also one of the most contemporary: a pedestrian-friendly city with a cultural scene as cutting edge as anywhere in the Balkans. During the warmer months the sight of what can often appear to be the entire city taking its evening constitutional promenade can make the city feel positively Mediterranean.

Multicultural Plovdiv became the European City of Culture on January 1. It has seldom looked better. Street art covers every vacant wall and a host of major concerts, events and exhibitions will take place throughout the year. The full programme is here.

Plovdiv – the part you want to visit at least – is small. You can get around on foot and will not need to use the city’s (reasonably efficient) public transport system. A taxi from the airport will cost no more than 30 leva. The city centre is focused on the main thoroughfare, Knyaz Alexander I, closed to traffic, and the Old Town directly to the east. Try and book accommodation in or around this area; we can recommend the Odeon Hotel (Otets Paisiy Street 40; hotelodeon.net) for its cosy charm.

Plovdiv’s largest mosque towers above the square below and is as much a symbol of the city as any other building, and a reminder that this was for centuries part of the Ottoman Empire. It’s not open to the public (unless you are heading inside to pray) but you can admire it from outside. Just a few steps away are the remains of the Roman Stadium, which sometimes hosts concerts. A short film attempts to recreate the atmosphere of a chariot race or mock sea battle (like the Colosseum in Rome, Plovdiv’s stadium could be filled with water). You can also see well-preserved bits of the stadium in the basement of H&M and the Excelsior shopping centre.

The Kapana area north of the mosque is Plovdiv’s bohemian district. The name means trap, so-called because it used to be easy to get lost in its myriad streets (the area was once much larger, but much of it was destroyed by fire in the 19th century). Young Plovdiv comes here to party and many artists and artisans have set up shop: finding gifts to take home is not difficult, and much of what is on sale is the real deal. It’s easy to find somewhere for lunch, although if you want to eat at Pavaj (Zlatarska Street 7; tel; +359 87 811 1876), one of the most famous eateries in the city, you will need a reservation.

Plovdiv, like Rome, was built on seven hills. Follow Saborna Street up to the top of Nebet Tepe, the most famous. Allow yourself the whole afternoon to visit the many small museums along the way: almost every house on Saborna Street is open to the public, either as a museum or a memorial house. The style – National Revival, note the overhanging balconies – was popular during the early 19th century when Bulgaria began to reassert its national identity. You can end the day with a meal at Rahat Tepe (Dr. Komachkov Street 18; tel: +359 87 845 0259): huge portions of Bulgarian classics served for next to nothing. The terrace is splendid in the right weather. Then head back into the city centre for an evening stroll along Knyaz Alexander I.

The Free Plovdiv Walking Tour is a great way to find out a bit more about the city. The tours – which last a couple of hours – are indeed completely free (although you should leave a tip) and the young, local guides really do know their city. Tours start in front of the Town Hall on Stefan Stambalov Square.

You can’t leave Plovdiv without whispering a secret in the ear of Miljo, the city’s unofficial mascot. An eccentric and gossip, though perennially penniless and somewhat ragged in appearance he was allegedly so well-endowed that the local ladies adored him. Indeed, so popular was Miljo that the city has honoured him with a statue halfway along Knyaz Alexander I — complete with a bulge in his trousers that may or may not just be his hand. It’s an unusual attraction to say the least, but it does rather sum Plovdiv up: a city that likes to have fun.

It’s amazing to think that Plovdiv’s now iconic Roman Theatre, which hosts theatre and musical performances during the spring and summer, lie buried for more than a thousand years. It was known that Plovdiv had once boasted one of the most spectacular amphitheatres in the Roman Empire, but nobody knew exactly where it was. Then, in the 1970s, an owner of a house up on Dzambas Tepe struck stone while digging in his garden: he had found the amphitheatre. Close by is Plovdiv’s idiosyncratic Orthodox cathedral, built in the 1840s and at the time a hotbed of nationalism as the Bulgarian church began its quest for independence from Greek dominance. Its elegant, three-layered, wedding cake-like belfry was added later.

It is well worth hiring a car for the afternoon so that you can head out to a couple of Bulgaria’s most spectacular sights: the fortress at Assenovgrad and the Bachkovo Monastery. Both are on the main road leading south from Plovdiv, and the drive takes no longer than 40 minutes. The fortress is built on a cliff high over the Asenitsa river, and was used a military redoubt since Thracian times, around 500 BCE. The Romans, Byzantines, Crusaders and Ottomans all left their mark, although little now remains: the Turks destroyed it in the 15th century. They left the fortress church intact however, and it remains one of the finest examples of Byzantine architecture in Bulgaria, and perhaps the most photographed church in the country. Bachkovo Monastery – while it lacks the jaw-dropping exterior of the more famous Rila Monastery – is nevertheless quite superb and features a number of unique exterior frescoes and icons. Founded in 1083 the monastery’s sublime ossuary is Georgian in style and reveals the eastern origins of its founders.

For a final meal in Plovdiv make reservations at Smokini (Otets Paisiy Street 12; tel: +359 999 000 996; smokini.bg), widely recognised as the best restaurant in the city. Besides fine food and a wonderful roof terrace the selection of good Bulgarian wines is exemplary.

Plovdiv in One Paragraph

Nicer than Sofia. Take the free walking tour that starts in front of the Town Hall. Go see the old stadium terracing underneath the Excelsior shopping centre. Look out for street art. Take a walk at sundown along Knyaz Alexander Street. Whisper something in Miljo’s ear for good luck. Visit the museums on Saborna Street. If you have the time, take a half-day trip to Assenovgrad Fortress and Bachkovo Monastery.