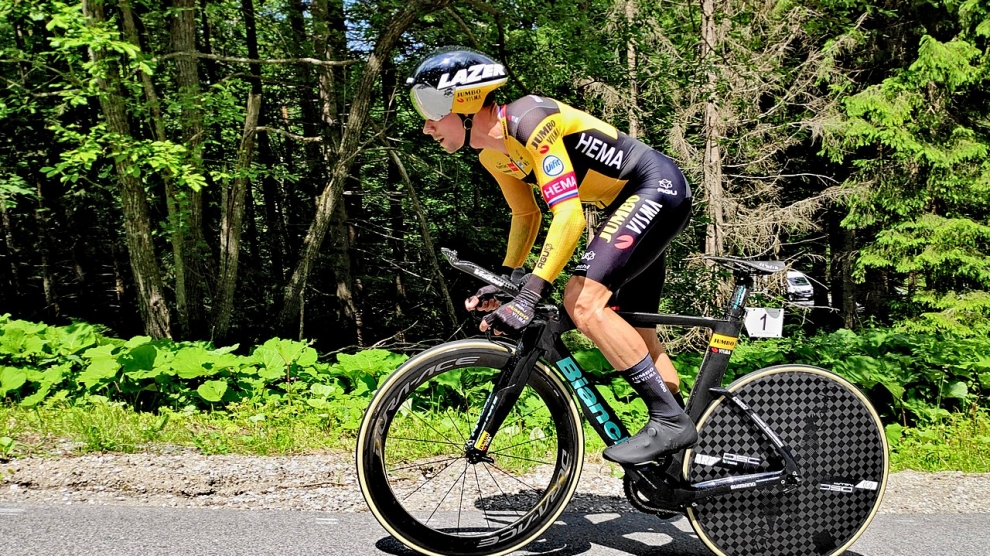 Barring total disaster in a time trial today, the last competitive stage of this year’s delayed Tour de France, a Slovenian will on Sunday ride into Paris to be crowned the winner of cycling’s most prestigious stage race.

Primož Roglič (pictured above) currently has a lead of 57 seconds over fellow Slovene Tadej Pogačar, but with Pogačar arguably the better time-trialler – only a few weeks back, Pogačar beat Roglič in Slovenia’s national time trial championships – it is still possible that the 21-year-old could overtake his friend and rival to win the race. What’s almost certain is that one of them will take the honours on the Champs-Élysées and become the first cyclist from emerging Europe to do so. The whole of Slovenia – as much as Covid-19 restrictions will allow – is likely to celebrate.

Similar in style on the bike, the two cyclists have very different backgrounds.

Roglič, now 30, is an accomplished former ski jumper (he was part of the Slovenian team which won the World Junior Championship in 2007) who turned to professional cycling at the relatively late age of 23, never having fully recovered from a horrific fall in training in 2007.

Indeed, in a short film produced by his team Jumbo-Visma in 2018 to spread the word about their new star, Roglič makes no attempt to hide the fact that ski jumping was his first love.

“When I was growing up most of my life was spent on ski jumping hills,” he says. “My dream was of course to be the best in ski jumping. I didn’t even have a bike of my own until I was 21.”

The fall – which is included in the film – changed everything. His former coach, Zvone Pograjc, says that while medical tests confirmed he had recovered both physically and mentally, “he couldn’t show that on the ski jump. Less talented ski jumpers had better results than he did.”

Roglič himself says he lost motivation. “I was 21 years old and not yet an Olympic or world champion. I thought it was time to change and move on.”

On a bike borrowed from a neighbour he entered local cycling races and began bombarding Slovenian teams with emails. One, Adria, gave him a shot. His first major victories came in 2014, a year after turning professional: the Slovenia – Croatia one day race, and a stage of the Tour of Azerbaijan. An even more successful season in 2015 – he won the Tour of Azerbaijan and the Tour of Slovenia – roused the interest of bigger teams who ride on the World Tour.

Jumbo-Visma, then known as LottoNL-Jumbo, signed him.

His first grand tour – the Giro d’Italia – came in 2016. Although he finished only 58th overall, he won the ninth stage. A year later he was selected for Jumbo’s Tour de France team, and won stage 17. He also placed second in the World Time Trial Championship.

There were more victories in 2018, but the real breakthrough came in 2019: overall victory in the Vuelta a Espana. Roglič finished two minutes and 16 seconds ahead of the then world champion, the veteran Spaniard Alejandro Valverde, with his compatriot Pogačar finishing third. Pogačar also won the white jersey for the best young rider, having claimed three stage victories en route to Madrid.

While Pogačar has been a professional cyclist since he was 18, as with Roglič cycling was not his first love. Instead, he played soccer as a kid, and trained with his local club after displaying not a little talent with a football. He says he only took up cycling “to copy my older brother”.

After turning professional in 2016 with the Slovenian Rog-Ljubljana team a string of victories followed, and a transfer to UAE Emirates at the end of 2018. He became the youngest cyclist ever to win a World Tour race when he won the 2019 Tour of California, while his performance in that year’s Vuelta showed incredible maturity.

For his team boss at UAE, Neil Stephens, Pogačar is a phenomenon.

“Usually when I listen to the race radio and consider what to tell him to do, he has already taken the decision and it’s the right one,” says Stephens.

What has so far tipped the balance in Roglič’s favour in this year’s Tour de France has been the strength of his team, Jumbo-Visma, who have been able to protect him from attacks on the toughest climbs, offering him a platform from which to launch his own attacks on the upper reaches of the highest mountain stages. Pogačar’s UAE teammates have often been unable to keep up with Jumbo-Visma’s pace, leaving their leader to fend for himself.

A time trial, however, is a pure test of a cyclist’s ability against the clock, rendering the relative strengths or weaknesses of teammates irrelevant.

Pogačar, however, does not appear to be overly hopeful of overturning the deficit.

“I’m not really close to the yellow jersey,” he said after the final mountain stage of the Tour on September 17. “If Primož has a super bad day, I may stand a chance, but actually I just hope to have a good day myself and secure second place.”

Second place in his first Tour would indeed be no mean feat. He has also won two individual stages – more, indeed, than Roglič, who has just one stage victory to his name.

When it comes to overall victory however, this looks set to be Roglič’s year.

Above all though, it’s Slovenia’s.

Polish secret agent who was ‘Churchill’s favourite spy’ honoured in London
In Łódź, an arts festival creates a future with no return
Comment