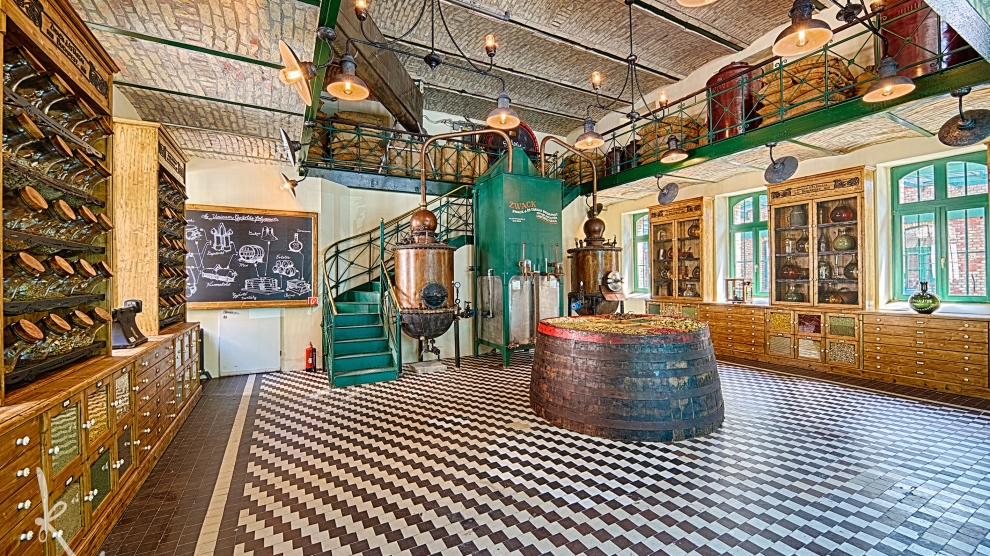 The explosive flavour of Unicum, the well-known Hungarian liquor, might not be for everyone. But after more than 200 years of history and three million litres produced every year, Unicum remains one of the most popular digestifs in the world.

The old distillery is still here, in the inner city of Budapest. Too many different smells reach my nose as soon as I walk inside. I cannot distinguish all of them, but one is clearly evident: it is the smell of my childhood. Every Sunday I used to go out for lunch with my family. After the coffee my father used to order a glass of Unicum, when possible, as not many Italian restaurants serve it. Before drinking it he would pass the glass to me so that I could smell its unique aroma.

And it is exactly from its uniqueness that the liquor takes its name. In 1790 Doctor Zwack, royal physician to the Imperial court, offered Joseph II a sip of Unicum as a remedy for indigestion. Legend has it that the royal reply was: Dr Zwack, das ist ein unikum!

But it took fifty years for the company to be officially founded and registered. From the very beginning, the Zwack factory was producing over 200 liqueurs and spirits and exporting them all over the world including to the United States, claiming to use only pure ingredients instead of chemical ones. In 1892, Zwack moved into the riverside distillery which remains the company’s home today, and which also operates as a museum.

“The old distillery is my favourite place,” Ernő Szájbely, manager of the Unicum Museum tells Emerging Europe. “Through the fragrance of the herbs and the different aromas I can feel the tradition of the company. And it is always interesting to see how much our visitors are surprised by our big cellar. They do not imagine that under us there is such a huge place with so many barrels filled with Unicum.”

At the end of World War II the Red Army took over the factory and used the barrels to build new bridges across the Danube after the Germans had blown the old ones up. The distillery itself was reduced to rubble. After the war, the family restored the distillery and got it running again but by that time there was a communist government and the company was nationalised in 1948. The recipe for Unicum went with them.

Once there, the Zwack family didn’t forget their origins. There was a time when Hungarians understood the meaning of migration as well as poverty and isolation. In 1956, Péter Zwack set up a charity for Hungarians who were emigrating to the United States.

Until 1987, when the Zwack family returned home, two lines of Unicum were being sold: a real one and a fake one. János and his brother Béla did not want to leave the secret recipe behind them. So the plant in Budapest kept producing a fake version of Unicum for many years, with a different name after the Zwack family sued them for using their brand, and in a different shaped bottle. In the meantime, János’ son Péter had started producing the original, in Italy.

The old family recipe is today known only to three people: Sándor and Izabella Zwack, the current owners of the company, and their mother Anne Marshall Zwack. The company’s employees are not aware of what the huge burlap sacks contain: each of them is distinguished by a specific number so that workers can do their job without having to look inside.

After the fall of communism Unicum was privatised. Péter Zwack submitted a successful bid and was able to buy back the entire enterprise, including several distilleries, from the Hungarian state.

“This is one of the many changes I have seen in the 21 years I have been working here,” Mr Szájbely says.

Another change is Unicum Next, developed as the drink of the next generation. It is made in exactly the same way as Unicum but the amount of bitter herbs is reduced and the citrus character of the drink enhanced, making Unicum Next a fresh, easy-to-drink herb liqueur.

“Our future focus is clear: digitalisation,” adds Mr Szájbely. “We want to make the museum and the factory more attractive for younger generations. We already have a smartphone app and several QR codes but we could do more, especially to attract foreign visitors. Our guests are mainly Hungarians.”

In 2018, 17,000 people visited the Zwack Family/Unicum Museum, helping not only the brand but the image of the entire country.

“Unicum can easily help to shape the image of Hungary abroad,” Mr Szájbely believes. “It has been part of what is known as Hungaricum [a collective term indicating a Hungarian product or tradition of distinction] since 2015. It is not only considered as a kind of national treasure, but when visiting our museum, people not only become aware of the story of the factory and the brand but also Hungary’s entire history. Unicum has witnessed all the major events of the last couple of centuries: from emperor Joseph II, to World War II, the communist regime and the present day.”

All photos courtesy Zwack/Unicum. The Unicum Museum is found at Dandár utca 1, Budapest, and is open daily (except Sunday) from 10am to 5pm.