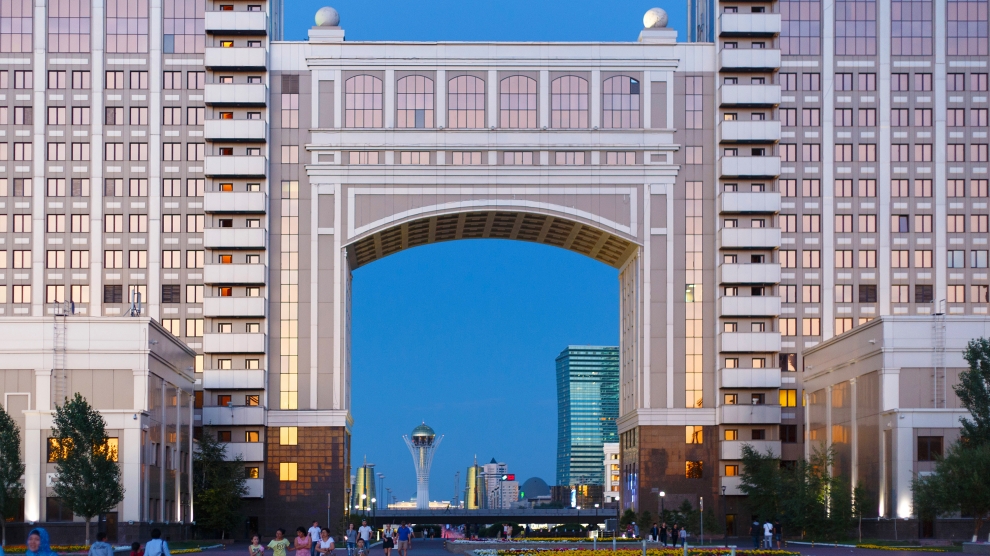 Restoring the ability of the blind to see is the stuff of myth and science fiction, but one start-up from Kazakhstan hopes to be able to use technology to stimulate echolocation in humans, enabling the blind and visually impaired with the same kind of vision found in dolphins and some other animal species.

The start-up, named Sezual (from the Kazakh sezu meaning to feel) is helmed by Kazakh inventor Galimzhan Gabdreshov and received a World Bank Fostering Productive Innovation Projects grant in 2017 to further develop its prototype device, which it hopes could be brought to market by 2021.

“He [Gabdreshov] became interested in the ability of some people and animals such as bats and dolphins to produce clicks which reflect off objects and create three dimensional pictures in the brain. So, he decided to prepare an electronic device and prove that blind people can navigate with it in the same way as animals,” explains Nurbek Yensebayev, a founding partner at the start-up.

Echolocation is the ability to “see” with sound, and while it is most commonly found in animals such as dolphins and bats, there have been recorded cases of blind humans being able to locate silent objects since the 18th century. Echolocation is now considered to be an ability of all humans. Sighted individuals, who learn of their environment through vision, typically do not detect echoes from nearby objects, although with training they can learn to do so.

That is exactly what the team at Sezual hopes to do for blind and vision impaired people, using a device which emits a clicking noise which objects in the environment reflect back. Based on this, users of the device can identify the object’s shape and distance.

The company says that with its device, the blind and visually impaired can learn echolocation in as little as two months. Additionally, users can feel the shape of the object and its composition, and even navigate among moving objects. While a full-scale study is yet to examine the device, the company says it has conducted independent trials with blind individuals that are very promising.

Sezual plans to eventually expand to the global market though a network of associations and organisations supporting the blind and visually impaired which could serve as distribution and training centres as well as a through a B2G (business to government) model.

The unique and innovative approach to health technology Sezual offers has been noticed by organisations both at home and abroad. In addition to the World Bank grant, the start-up was selected to be part of Astana Hub, a start-up hub located in Nur-Sultan, and went through a business accelerator at Nazarbayev University.

“Government support for us is the modernisation of the road map, which takes into account inclusive innovations and bringing them to the end consumer,” says Mr Yensebayev.

Inclusive innovation is at the top of Sezual’s list of priorities, he says.

“It determines the scientific potential of any country. It is an attractive field for start-ups, entrepreneurs and scientists,” he tells Emerging Europe. “For our team the employment of disabled people and their involvement in public life play a big role.”

And with the potential size of the market (Sezual says its serviceable obtainable market is worth 72.2 million euros) healthtech inventions such as these can really put Kazakhstan on the world health innovation map.

“We want to make our homeland a source of in demand, inclusive innovations and to export technologies worldwide, in order to improve the quality of life for all citizens with special needs,” Mr Yensebayev says optimistically.

According to Mr Yensebayev, the start-up doesn’t plan to stop at echolocation. It is now working on developing a high-speed version of the device that could be used by cyclists and runners, and an underwater device too. Electronic roads for the blind that could replace current tactile paths are also in the pipeline, while the start-up is also working on devices such as a mechanical exoskeleton for people with muscular dystrophy, and a device that could add tactile sensations to video transmissions called Tactile TV.

One device that has already seen use is the Sezual Braille self-tutor, an electronic device to help users learn the Braille script in many different languages such as Kazakh, Russian, English, and Chinese.

Sezual has already begun raising money to be able to donate 40 of these devices, which have received official state recommendation for use, to schools in Kazakhstan.