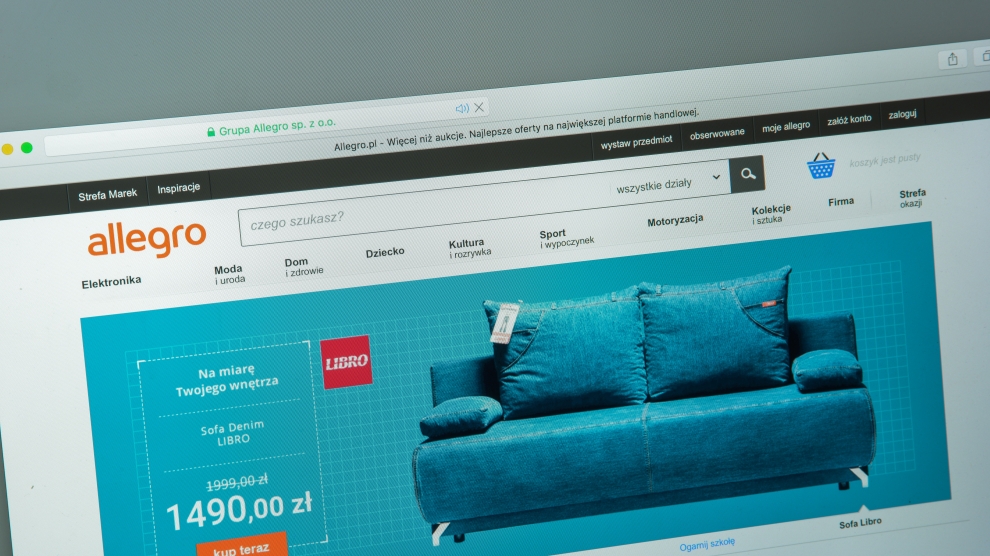 Allegro, Poland’s leading e-commerce platform, announced this week that it plans to list on the Warsaw Stock Exchange (WSE) in a move that could easily become emerging Europe’s largest initial public offering (IPO) to date.

According to people close to the deal, the company is targeting a valuation of between 11 and 12 billion euros. However, sources quoted by financial media in Poland reveal that the equity value might end up being closer to 13 billion euros. This would make Allegro the biggest company listed on the Warsaw Stock Exchange, beating out the Polish video game publisher CD Projekt’s, valued at 11 billion euros.

This valuation is based on 26 to 27 times the company’s EBITDA and projected 2021 earnings of two billion złoty (around 450 million euros), sources have said.

Recently released intention-to-float documents reveal the company plans to sell new shares worth around a billion złoty (222 million euros), as well as a secondary component in which private equity groups and some company directors and managers will sell down some of their existing stakes. The size of this secondary component is currently unknown, but it is expected to be larger than the primary offering.

Altogether, between 20 to 25 per cent of the company will be floated with the current owners retaining the majority stake. The previous largest public offering in Poland came in 2010 when insurer PZU raised 2.1 billion euros.

Aside from very likely becoming Poland’s largest IPO, Allegro coming out to the Warsaw Stock Exchange will be another sign of the exchange’s ongoing transformation from marketplace for “old economy” stocks – banks, insurers, mining companies and the oil and gas sector – and raise the profile of its tech portfolio.

The Warsaw Stock Exchange is the biggest bourse in the region, and has been trying for several years to attract more and more tech companies.

“We are by far the largest exchange in the region, roughly we have forty to fifty per cent market share trading volume of cash equities and around 97 per cent of trading of derivatives,” WSE CEO Marek Dietl said in a recent episode of the Emerging Europe Talks podcast.

Most analysts believe that now is the right time for Allegro to go public.

“Allegro’s IPO is the big thing for Warsaw. It shows that the structure of the market is changing towards the new economy and brings new reasons to invest in Eastern Europe,” says Andras Szalkai, fund manager at Raiffeisen Kapitalanlage in Vienna. “Allegro’s success may also incubate new entrepreneurs, as was seen in the case of CD Projekt causing a boom in the local gaming industry.”

Allegro has said that the IPO will help it pay off a part of its net debt, which at the end of June stood at 3.7 times the company’s adjusted EBITDA. The company is currently the biggest e-commerce market in Poland, and analysts expect it to remain so unless foreign giants like Amazon attempt to make a significant play for the Polish market.

While the Covid-19 related lockdowns hit many sectors of industry, online shopping saw a boom in sales globally and this trend has been visible in emerging Europe as well. For Allegro, this meant a 52 per cent sales boost to 1.77 billion złoty (around 397 million euros) in the first half of the year.

What’s more, there is still a lot of room for growth in Polish online sales as only eight per cent of the retail market is online, compared to the UK’s 18 per cent.

The IPO is expected to happen in October.