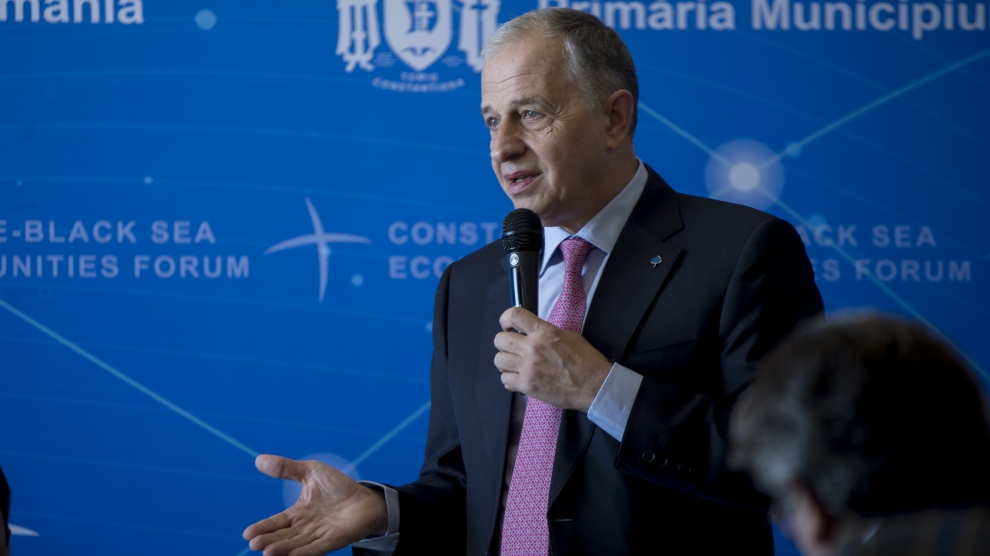 Leading figures from the world of business, finance, diplomacy and politics met in the Romanian city of Constanța on September 28 to discuss the vast potential of both the city and the surrounding region. Organised by the Aspen Institute and  Constanța City Council in partnership with the Ministry for Business Environment, Commerce and Entrepreneurship, the Bucharest Office of the German Marshall Fund of the US, the World Bank Romanian Office, the European Bank for Reconstruction and Development (EBRD), and with the support of Rompetrol, Damen, ExxonMobil and BCR, the Danube-Black Sea Economic Opportunities Forum highlighted the need for the city to serve as an engine of growth on Romania’s eastern flank.

“Constanța can be the powerhouse of Romania’s east,” said Mircea Geoana (pictured above), a former Romanian foreign minister and head of the Aspen Institute in Romania. “We need to rebalance Romania and Constanța is well positioned to help achieve that,” he added.

The county of Constanța is currently the third-largest economy in the country: only the capital Bucharest and the western county of Timiș can boast higher GDP per capita. The World Bank’s Marcel Ionescu-Heroiu pointed out that Constanța is currently growing faster than Singapore during its boom years, and that it is outperforming all other secondary cities in the other countries of emerging Europe. Growth is driven by shipping, energy and tourism, as well as excellent infrastructure – few cities in Romania can match Constanța’s connectivity – but there remains room for improvement, and for more investment.

Indeed, the city’s mayor, Decebal Făgădău, called for more foreign investment, saying that there was plenty of room for foreign capital, and that the city should “open its borders.”

“Local stakeholders are more dynamic than central government,” he said, in conversation with CNN’s Sam Burke, who chaired a number of panels at the forum. “They are better at absorbing funds.”

Ramona Manescu, a Romanian member of the European Parliament, noted how Romania at a national level was failing to absorb available EU funding and that cities could potentially pick up the slack. “We are at the eleventh hour,” she said. “The money is available and we need to make sure that we do not lose it.” The International Finance Corporation’s Cristian Nacu seconded Mrs Manescu’s thoughts: “the money is there,” he said, “but three governments in a year and a half does not help.”

Venera Vlad of the EBRD called the 21st century “the age of cities.” The 19th century was about empires, the 20th century was all about countries, bow we are in the era of cities,” she said, adding that the bank worked primarily with cities in regions in Romania, as the country was in an advanced stage of its transition.

“The geographical position of Constanța port allows the possibility to re-direct through Romania the cargo flows that come from Far East to the North-Western European ports, using the existing transportation network (rail, road, the Danube-Black Sea Canal and the Danube ports) as the basis for developing competitive and efficient inter-modal transport, thus saving over 2,400 sea miles as compared to current routes,” said Bogdan Belciu, a partner at PricewaterhouseCoopers (PwC).

“For all its faults Romania is the only predictable country in the Black Sea region,” said Mircea Geoana in his closing address. “Your investment here is safe. This is a competitive advantage and we should use it as a selling point. And Constanța should be at the forefront of the transformation of the Romanian economy.”