Moldova’s parliament has suspended the country’s president, Igor Dodon, over his failure to sign into law a number of pieces of legislation. It is the fifth time that Mr Dodon has been suspended.

The Moldovan constitution states that the president has the power to reject legislation once, but is then obliged to sign it if parliament asks him to do so.

In all there are five pieces of legislation Mr Dodon has refused to sign, and they include a new audiovisual law, a bill declaring May 9 Europe Day, and a law approving the construction of a new US embassy on the site of a former stadium. Adrian Candu, the parliamentary speaker, will take over Mr Dodon’s responsibilities during his suspension and is expected to sign the bills into law. Once he has done so, Mr Dodon will be restored to the presidency.

The campaign for parliamentary elections officially began on December 10 with Mr Dodon confident that his Socialist party will win the most seats. The poll will take place under a mixed electoral system introduced in 2017 despite protests in Chișinău and criticism from the EU and the United States.

Half of MPs will be elected on party lists and another half in individual constituencies.

Critics claim the system will favour the country’s two largest political parties, the Socialists and the ruling Democratic party. 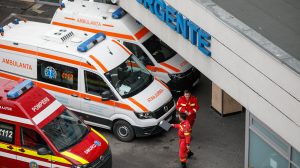 Romanian doctors in ‘cry of despair’: Emerging Europe this week