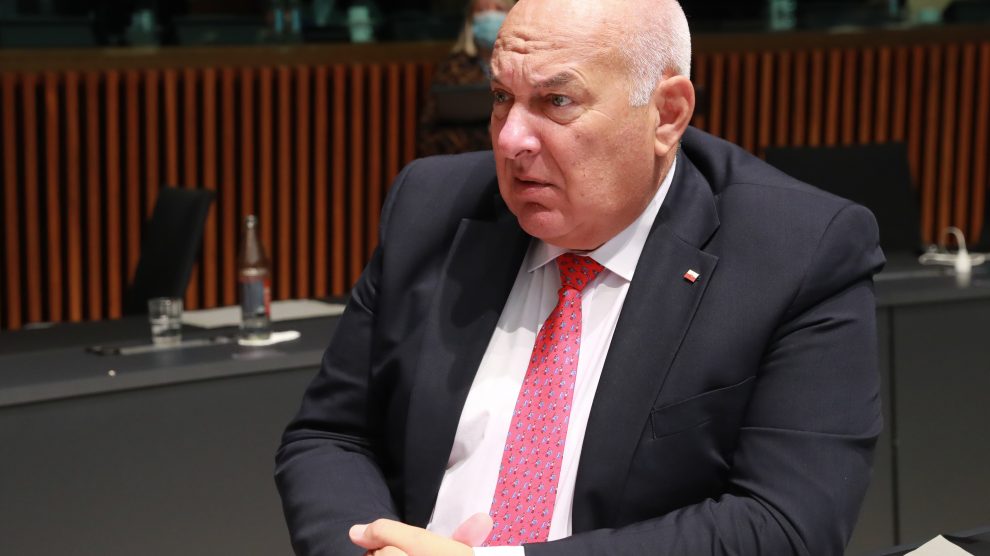 Poland’s finance minister Tadeusz Kościński has resigned following a backlash over how the government has implemented a flagship package of tax reforms. The so-called Polish Deal, which took effect at the beginning of this year, includes a series of spending pledges and tax changes for lower and middle earners that the ruling Law and Justice party (PiS) hoped would boost both the economy and its own flagging popularity. However, the package has proved to be contentious and has led to confusion over the effect of some of the changes. Some lower earners received less income in January than expected, even though officials had said that only the highest earners would be affected.

South Korean manufacturing conglomerate Samsung will invest around 900 million zloty (198 million euros) in expanding production capacity in Poland around its existing facilities in the town of Wronki. The firm will create a new 40,000 square metre production and warehouse hall and expand its existing refrigerator factory, said Olgierd Bałtaki, director of Samsung Electronics Poland Manufacturing. It will also, he added, “create an industrial complex in the vicinity of the existing plant in Wronki” that will function as a “household appliances cluster in which the factory’s sub-suppliers will be located”.

Bulgaria’s new prime minister has criticised the nation’s prosecutors for dragging their feet on tackling graft, advancing a pledge to fight the problem in the European Union’s most corrupt member state. Premier Kiril Petkov was summoned as a witness on Wednesday after he accused Chief Prosecutor Ivan Geshev for not doing enough to look into high-profile crimes. They include financial and other infractions over the past decade that media have often covered with significant detail but that remain unsolved.

The first batch of US troops reinforcing NATO allies on the eastern flank following a Russian military build-up on Ukraine’s border has arrived in Romania, Defence Minister Vasile Dincu said on Tuesday. The United States is sending nearly 3,000 extra soldiers to Poland and Romania to shield Eastern Europe from potential spillover from the Ukraine crisis. The Pentagon said it will relocate a Stryker squadron of about 1,000 US service members from Vilseck, Germany to Romania. In Poland, troops began arriving on Saturday.

The new Czech government has approved a revised budget for this year with the goal of weaning the central European country off its pandemic-era deficits and helping fight surging inflation. After taking power two months ago, Prime Minister Petr Fiala’s cabinet voted on Wednesday for a 280 billion koruna (13.2 billion US dollars) shortfall. That represents a 26 per cent reduction of the gap planned by the previous administration led by billionaire Andrej Babiš, and a 33 per cent drop from last year’s record deficit. The bill must be approved by the lower house of parliament.

Swimming will have world championships after all in 2022, with Hungary’s Prime Minister Viktor Orbán and the sport’s world governing body jointly announcing the “extraordinary” event on Monday. Budapest will host an additional world championship from June 18-July 3 to fill a gap left by the scheduled event in Japan being pushed back to 2023 because of the Covid-19 pandemic. The Hungarian capital hosted the worlds in 2017 and was already slated for another turn in 2027 before the latest award. The championships are usually held every two years.

German prosecutors are investigating a Czech millionaire for allegedly driving along an autobahn at up to 417 km/h. Radim Passer is accused of holding an illegal motor race on the A2 motorway between Berlin and Hannover in July 2021. The driver of the Bugatti Chiron vehicle had recorded the incident and posted a clip on YouTube earlier this year, generating widespread criticism in Germany. The 58-year-old millionaire drove “at an inappropriate speed, disregarding traffic rules and in a reckless manner in order to reach the maximum possible speed,” prosecutors said.

Croatia’s national bank announced a new tender for the country’s one-euro coin design after a plagiarism scandal led to the withdrawal of an earlier submission. Croatia is preparing to adopt the euro currency in 2023 and last week unveiled the winners of a contest whose designs were set to be struck into the Balkan country’s new coins. The controversy centred around a logo featuring a marten standing on a branch that was strikingly similar to a picture taken by British photographer Iain H Leach, drawing accusations of plagiarism.

Russia and Belarus began 10 days of joint military drills on Thursday amid ongoing diplomatic efforts to defuse the crisis over fears that the Kremlin is planning an incursion into Ukrainian territory. The military drills, called “Allied Resolve-2022,” began in Belarus and will end February 20, the Russian Ministry of Defence announced Thursday in a statement. “The purpose of the exercise is to work out the tasks of suppressing and repelling external aggression while conducting a defensive operation, countering terrorism and protecting the interests of the Union State,” the statement said.

Skier Darya Dolidovich has fled Belarus after being barred from competing in the Winter Olympics over accusations regarding her involvement with the country’s opposition movement. The 17-year-old cross-country skier was stripped of her International Ski Federation (FIS) code – which is required for athletes to compete in events run by the governing body – back in December. It followed a decision from the Belarus Cross-Country Skiing Federation, according to Reuters.

Azerbaijan has freed eight Armenian soldiers captured during deadly border clashes last year as the two sides look to hold new talks on easing their simmering border conflict. Azerbaijani officials said that the February 7 move was made on the basis of “humanist principles.” According to the officials, the group of Armenian soldiers returned to Yerevan include several servicemen involved in border clashes in mid-November. French President Emmanuel Macron said his country had sent a plane to pick up the group.

Estonia-based VC firm Change Ventures this week announced the closing of a 49 million euros fund, the largest seed-stage fund raised in the Baltic to date and the latest sign of an accelerating boom in the region. Baltic start-ups raised more than 1.5 billion euros in 2021 — triple the amount raised in 2020 — according to the Baltic Startup Funding Report. And the pace appears to be increasing: one billion euros of the fundraising came in the second half of 2021, and 2022 has got off to an even faster start.

Lawmakers in Montenegro ousted the government last Friday after internal disputes and weeks of political deadlock. Parliament passed a no-confidence motion in Prime Minister Zdravko Krivokapić and his cabinet. Krivokapić’s conservative pro-Serbian government has been plagued by bitter infighting since it came to power in 2020. The vote was supported by opposition parties and even a junior partner in the government, the progressive URA party.

Serbia has amended its constitution make its judiciary more independent from politicians, fulfilling a key requirement on the Balkan state’s European Union accession path. Lawmakers approved changes to how judges and prosecutors are appointed on Wednesday, following a January 16 referendum on the issue. The changes empower two special bodies, the High Court Council and the top prosecutor’s office, to assume the authority previously held by parliament. “Serbia has made a big step forward in improving the rule of law, which is deeply in the interest of all its citizens,” Parliament Speaker Ivica Dačić said. “It’s a rare example that those in power cede part of their authority.”

Authorities in Kosovo on Wednesday suspended the restoration of an old house linked to an Albanian official who was a notorious Nazi collaborator during World War II. The project, funded by the European Union and Kosovo’s Culture Ministry, had become a target of criticism from Germany and antisemitism accusations. Kosovar authorities said they would seek alternatives for a new cultural centre that had been planned for the restored property.

The European Union and the United States on Tuesday urged Albania to pass a constitutional amendment to complete the vetting of the judiciary in its path toward becoming a member of the bloc one day. A judicial reform approved in 2016, following direct assistance from Brussels and Washington, has vetted hundreds of judges and prosecutors but some 300 others have still remained. Its five-year mandate is over and the parliament should approve a constitutional amendment to extend the vetting process, the world powers urged. A joint EU-US statement said “the vetting of judges and prosecutors is a fundamental element of justice reform.”

Kazakhstan’s President Kassym-Jomart Tokayev has given the government a two-month deadline to develop a plan for repatriating what he described as vast sums of money illegally spirited out of the country. In making his remarks to the cabinet on Tuesday, Tokayev did not name any people suspected of stashing money in foreign offshores, but the call will be read by many as another shot across the bow of the family of the president’s predecessor, Nursultan Nazarbayev.

Uzbekistan has urged the international community to consider engaging with the Taliban regime in Afghanistan and to provide the country with aid in the interests of mitigating an unfolding humanitarian disaster. Speaking to reporters in Tashkent, Uzbek Foreign Minister Abdulaziz Komilov said that failure to provide succour to Afghanistan could lead to more instability. “Deterioration of the situation … could lead to radicaliaation in society, confrontations between groups, and the possible consolidation of extremist forces,” he said in remarks reported by government-run newspaper Narodnoe Slovo on Tuesday.