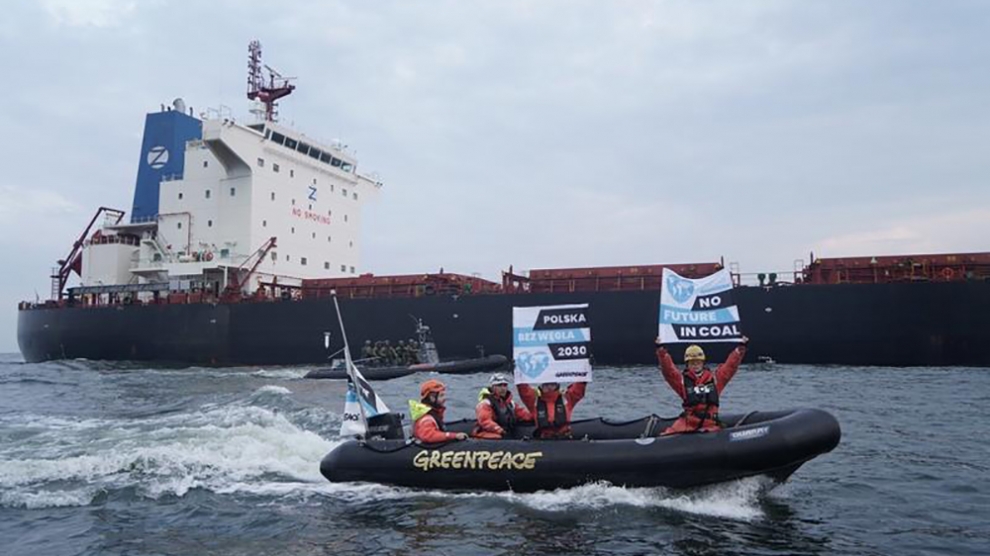 Polish police have detained a number of Greenpeace activists in the Polish port of Gdańsk. The climate protesters were arrested on September 9 as they stopped a vessel from unloading coal.

Greenpeace’s flagship the Rainbow Warrior remains anchored in the port, preventing a shipment of coal imported from Mozambique from being unloaded.

Earlier on September 9, activists had painted the slogan Poland Beyond Coal 2030 on the side of the ship’s hull as part of a protest in which activists also displayed slogans saying No Future in Coal.

“This is a climate emergency and we need to take action now. This is our moment of truth and there is no turning back. We are taking action along with the millions of other people around the world demanding an end to fossil fuels. We have no time to waste,” said Greenpeace Poland Programme Director Paweł Szypulski.

“Instead of protecting Polish citizens and the country, the Polish government is looking after the interests of the coal lobby as it continues to import coal and block progress within the European Union to achieve an ambitious climate neutrality target.”

Armed border guards boarded the Rainbow Warrior late at night and forced entry by breaking a window with a sledge hammer. Those on board the ship remain in detention.

“The Polish authorities should act as quickly and decisively to address the climate crisis as they do in suppressing peaceful protests. These activists have had the courage to draw attention to Poland’s climate destroying energy policy and in response they’ve been threatened with machine guns. This is unacceptable. We call on the Polish government to change course now and end the age of coal,” said Marek Józefiak, coordinator of the climate and energy campaign at Greenpeace Poland.

The Polish government’s current energy policy facilitates the continued import of coal, mainly from Russia, but also from countries as distant as Australia, Colombia or Mozambique.

Greenpeace Poland is demanding that the Polish government commit to a coal phase-out by 2030. This is part of an international call across the month of September to demand a transfer to renewable energy and hold the fossil fuel industry accountable for the climate crisis.

On September 20, three days before the UN Secretary-General’s Climate Action Summit in New York, millions of people across the world are expected to participate in youth-led strikes to demand transformative action to address the climate crisis.

To keep global warming to 1.5°C and prevent a climate catastrophe, Greenpeace is calling on the EU to achieve total decarbonisation by 2040 and to cut greenhouse gas emissions by 65 per cent by 2030.