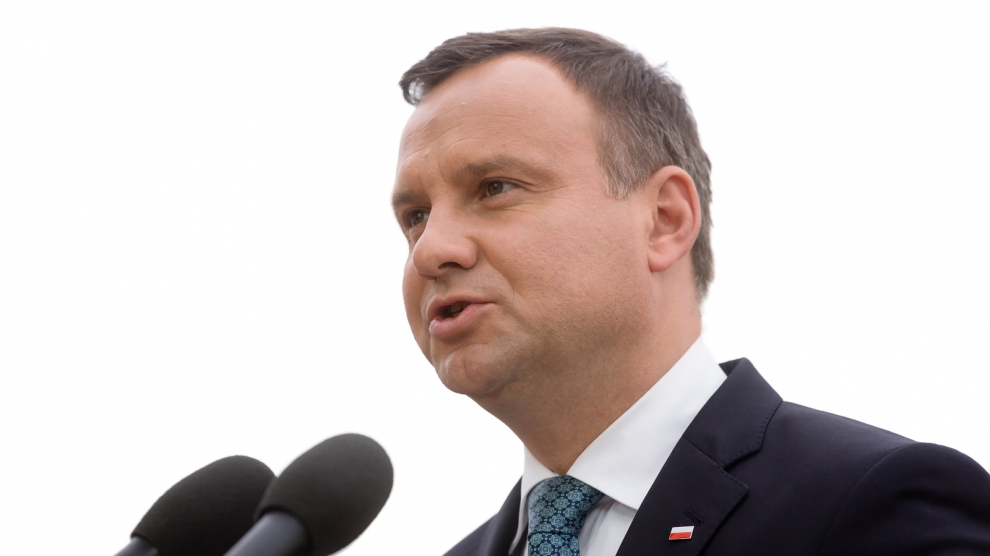 Polish President Andrzej Duda launched a fierce attack against the European Union on September 11, as he spoke at a meeting of residents of Leżajsk, in Podkarpackie province.

“Let them leave us alone and let us fix Poland,” said the president. “I want citizens to be convinced that someone thinks about them, and not about some imaginary community from which little results for us.

“Community is needed here, in Poland, for us – our own, focusing on our problems, because they are the most important matters for us,” added Mr Duda.

President Duda’s statements appear to be part of unofficial campaigning ahead of local elections.

“President Duda does not understand what damage to the Polish image and position of Poland he has brought forth with such statements,” said Civic Platform (PO) leader Grzegorz Schetyna. Mr Schetyna added that PiS is leading Poland to the brink of the leaving the EU.

Mr Schetyna told radio station TOK FM that the president’s comments about an imaginary community spoke was directed towards the European Union.

“Such statements can sometimes be said in an election campaign, such an emotional one, when someone wants to highlight certain issues, whether to reach part of the electorate” he said. “Voters who have, for example, a distance to foreign, international and European issues. Unfortunately this is not the case here, the president is engaged in PiS’ election campaign, he wants to help PiS, at the same time completely undermining Poland’s reputation, image and position, not only in Europe, but in the free world. After all, such a statement will be quoted and sent by all embassies to the capitals of the world,” Mr Schetyna argued.

In defence of President Duda, Marcin Horała, an MP for PiS, explained in a conversation with Wirtualna Polska (WP) that the words of the president could be understood differently:

“We are talking about one sentence taken out of context from a very long speech. The president is right that the project of breeding a new, better, European man has failed. Poles are still Poles. I suspect that it was about the identity dimension, he did not say anything about the treaties. The EU is the organisation to which we belong. We perform duties, but we expect to have our rights respected,” explained Mr Horała.

Whatever the reasons behind President Duda’s remarks, the question remains whether the Poles will stand behind their president or stand behind the EU. Since joining the EU in 2004, Poland has been the largest net beneficiary of EU funding, receiving 67 billion euros for the period 2007-2013 and more recently 82.5 billion euros for 2014-2020 period.